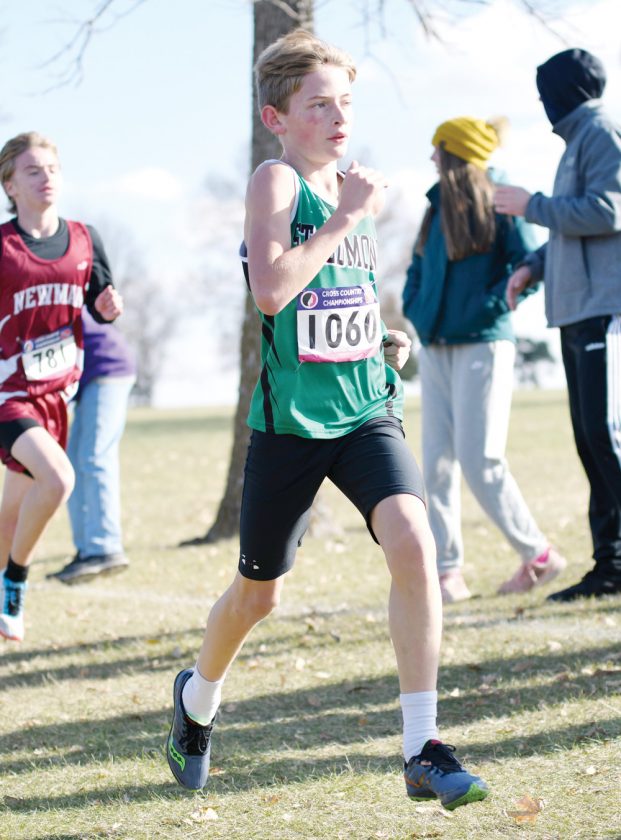 Messenger photo by Britt Kudla Aaron Lursen of St. Edmond competes in the 1A race at state cross country at Lakeside on Saturday. For more photos, please visit CU.messengernews.net

St. Edmond cross country coach Mike Szalat examined the times from his team Saturday after the state meet and was a bit surprised.

“Our times were almost exact as those from districts, which was really weird to see,” Szalat said. “I don’t know if we had a meet like that where so many were within 5-to-10 seconds off those times. It was just interesting to say the least.

“To run times comparable to districts with these conditions, that was good to see.”

Bemrich was one of four members of the SEHS cross country team that helped the Gaels win the 1A state cheer/dance title and stunt group crown, along with a third place finish in timeout.

Along with Bemrich, Jacey Ash, Caroline Shelly and Klara Baker competed in Des Moines before returning for the cross country meet.

“I’m happy for them and their honors at cheerleading,” Szalat said. “I’m not sure how much it took out of them to do all of that, but I wouldn’t want it any other way. They really had a great day.”

This was the sixth consecutive season that St. Edmond had qualified for the state meet as a team on the girls side. They were third at districts and runners-up at the North Central Conference meet earlier this year.

“It was great that we got to run here at state and set the table to go after seven in a row next year,” Szalat said. “With everybody coming back, this was a good building block. Caroline’s injury really hurt because she was having a great season.”

Aaron Lursen completed his ninth-grade season by placing 46th overall for the Gaels. He had a time of 17:39, just four seconds off his freshman record set at districts.

“There were plenty of positives to take from both the girls and Aaron,” Szalat said. “There was a lot of excitement in the program and a really fun week. We had a lot of people out here and a lot of support from both inside the school and out. That is why you want to keep coming back.

“It’s been a lot of fun and hopefully we can continue to do this.”