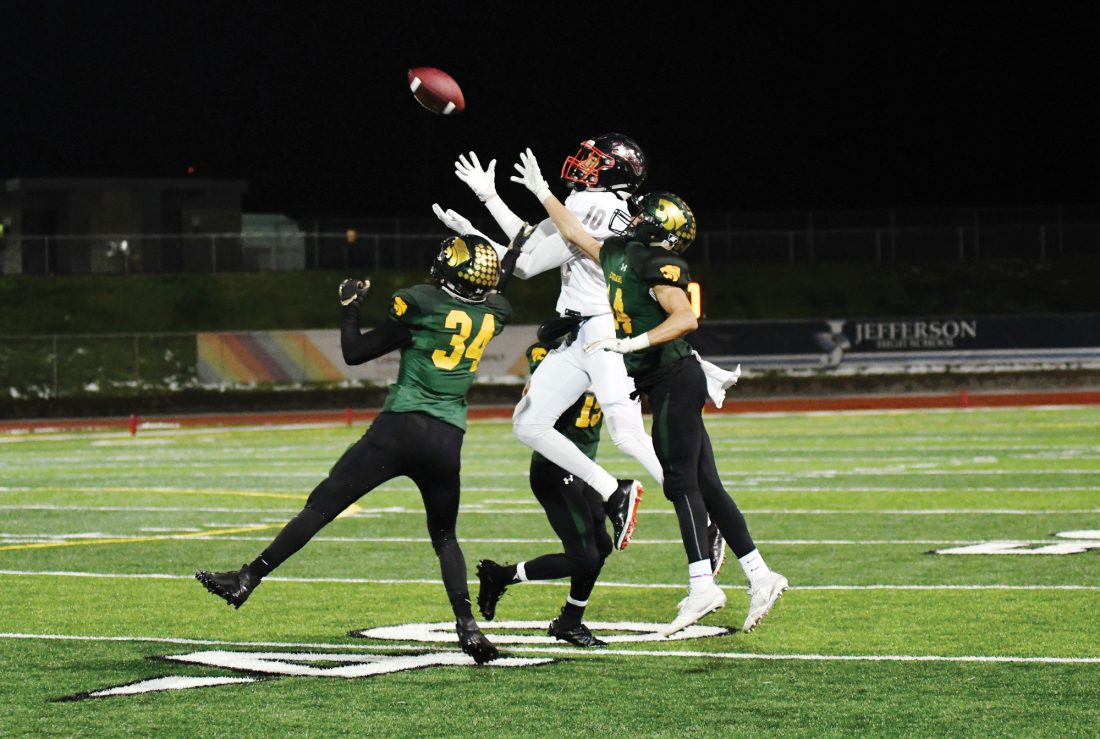 Messenger photo by Britt Kudla Tysen Kershaw of Fort Dodge goes up for a catch with three Cedar Rapids Kennedy defenders keying on him during a Class 4A playoff game.

Senior wide receiver Tysen Kershaw made a little history of his own on Monday.

“It’s just a perfect way for Tysen to cap his football career here. The icing on the cake, so to speak,” Miller said of the University of South Dakota commit. “I’m just really proud of him and everything he accomplished. He did things the right way for our program on and off the field.

“There wasn’t any question about him being a first teamer. His stats maybe weren’t what they had been a year ago, but defenses did so much to try and stop him. They threw everything at him. Yet he still had very productive numbers.”

The 6-foot-4 Kershaw finished among the Top-10 receivers in Class 4A with 49 catches for 606 yards and eight touchdowns. He became the first Dodger ever to eclipse the 2,000-yard mark for his career, and ended up ranked among the 10 best receivers ever statistically in Iowa’s largest class for receptions, yards and TDs.

“You don’t have to go much further than that,” Miller said of the three-year standout. “Tysen’s overall body of work spoke for itself. I talked to (eight-time defending state champion Dowling) Coach (Tom) Wilson about Tysen recently, and he brought up (former all-stater and University of Michigan receiver) Amara Darboh (who is now with the Seattle Seahawks). Darboh had huge numbers his junior year, but not as much as a senior. And that happens. Stopping Tysen became the first, second and third priority for many teams we played.”

Kershaw said he was aware of just how rare the repeat first-team recognition would be, not only at Fort Dodge but in general.

“I knew coming into the season Sam was the only person to do it in school history,” Kershaw said. “So that really gave me something to chase (individually).

“This means a lot and I’m honored, knowing all my hard work the past four seasons helped lead to this. It was a personal goal of mine.”

Thorson was a first team all-district safety as a junior last year. He accepted that responsibility again this season, while also inheriting the full-time quarterback duties from 2018 IFCA Class 4A player of the year Drake Miller.

The 6-2 Thorson wasthe long-snapper on PATs and the Dodgers’ punter as well. He was named the second team’s utility/at-large selection.

“Pretty appropriate for Asle, who just did it all for us,” Miller said. “He basically played every down; I think he was on the field for over 98 percent of our snaps. You don’t see that much in 4A anymore.

“I think the best way to describe his value is to (hypothetically) take him out of our lineup and see what we look like in all three facets of the game. He had a lot of pressure on him, both from what we asked and given his (family history). He handled it like a captain would. And Asle’s best ball is still ahead of him.”

Thorson’s grandfather, the late Sherwyn Thorson, played football and wrestled at the University of Iowa. His father, Tjeran, was a first team all-state linebacker in 1988.

Thorson’s other grandpa, Sam Moser, was a star high school and junior college football player before his Hall of Fame coaching career at FDSH. And one of his uncles, Nik Moser, was a first team all-state defensive back for the Dodgers who went on to start at Iowa State University.

Lee, a three-year letterwinner, led FDSH in tackles, tackles for loss and sacks this fall. The 195-pounder was the co-captain of a Dodger defense that produced the second-most turnovers ever in a single season (32).

“I’ve said it before: Austin is the epitome of Dodger football,” Miller said. “He never makes excuses and never gets out-worked. He’s a true throwback.

“There were so many great linebackers in 4A this year, so this is a tremendous achievement and no one is more deserving. He put everything he had into our program. We’ll really miss Tysen, Asle, Austin and this entire senior class.”