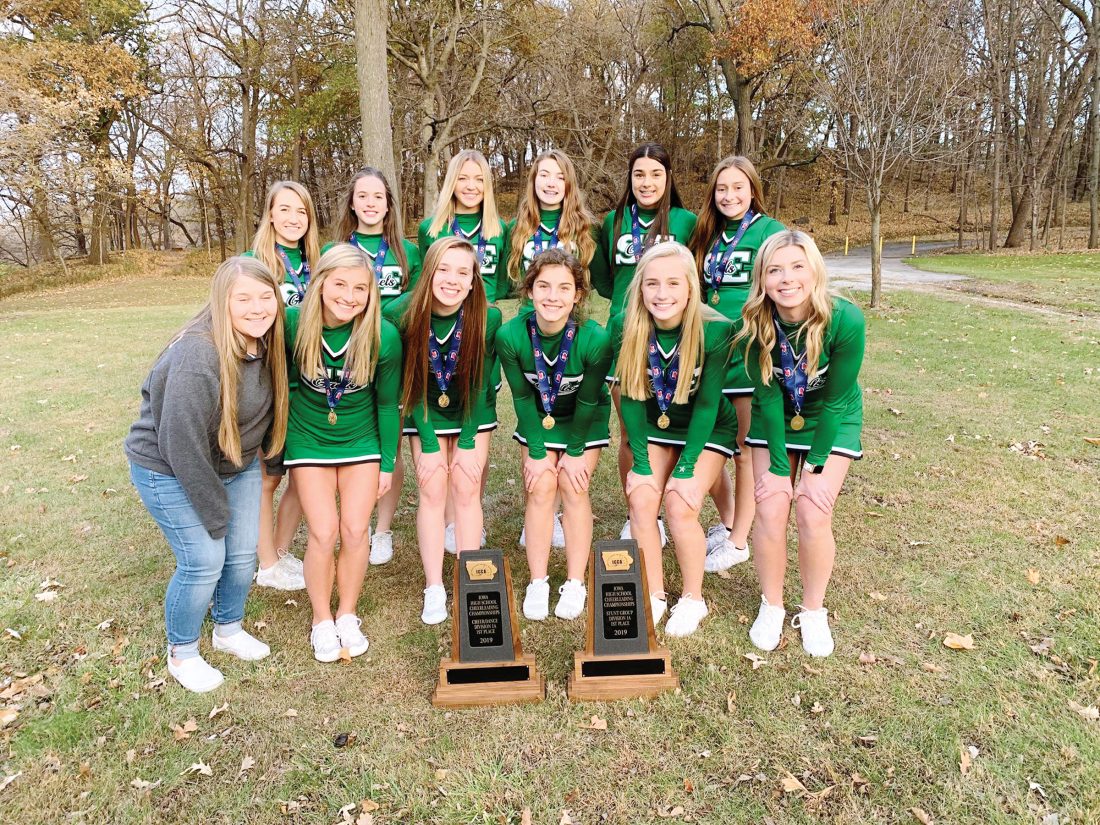 DES MOINES — St. Edmond’s performance at the 2019 Iowa Cheerleading Coaches Association championships was one for the record books.

Yet Saturday’s Class 1A team state title in the cheer/dance category and second consecutive stunt group crown was more than just perfect timing and pinpoint execution. Like preparing for a big test, the Gaels accrued countless hours of sweat equity behind the scenes to make sure they would define the moment once it finally arrived inside the Jacobson Exhibition Center at the Iowa State Fairgrounds.

“Going all the way back to tryouts and putting our first practice schedules together after that, you could see this building,” said 14-year head coach Amber Barwin. “We had really great turnouts at our open gyms, and even though it was optional, everyone showed up all summer long. They didn’t want to miss a practice. We were working on getting the fundamentals down, so that when the time came (to perform), we’d be ahead of the game.

“We had practice twice a week all summer, and even though it wasn’t mandatory, the girls all made it a priority. Even this fall, with girls who had other things going on between school, jobs and other sports, they held each other accountable. We knew this could potentially be a special season after losing only one senior (from a year ago to graduation), so the focus was there from day one. And even now (following the golden double in Des Moines last weekend), we’re going right back to work.” 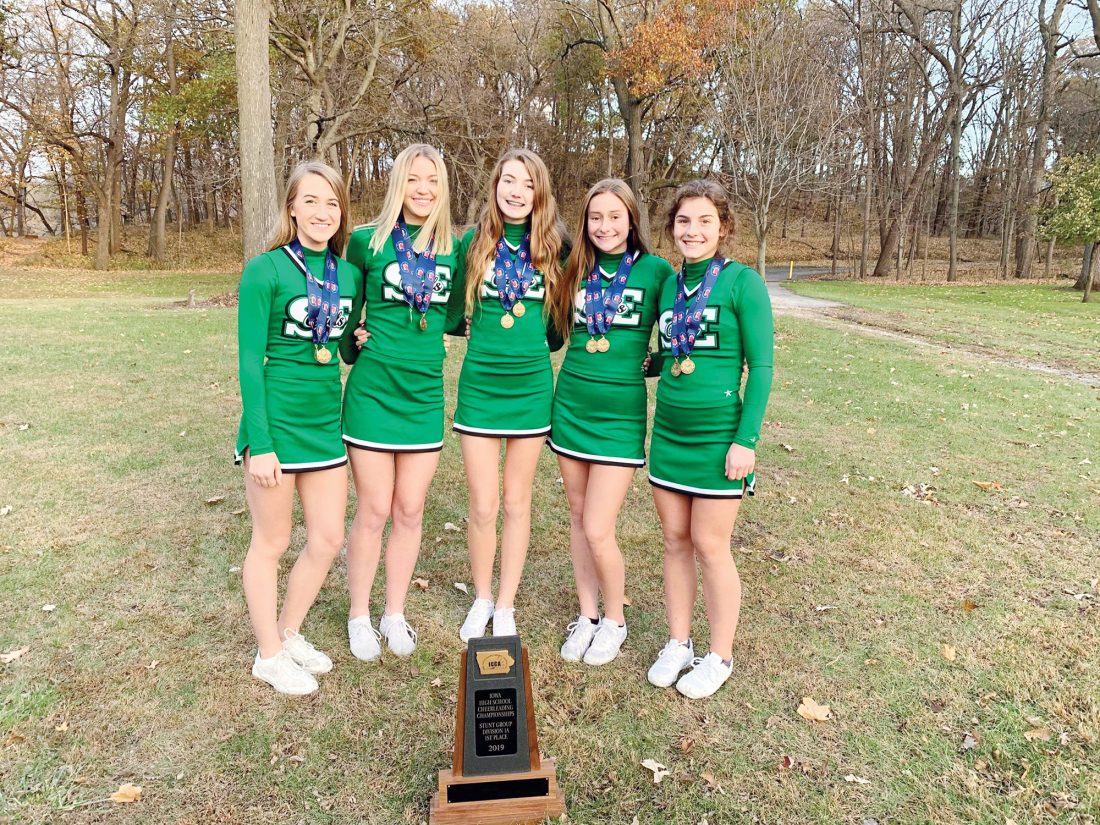 “We had been working very hard the few weeks before state, and to be honest, we were very nervous about whether or not we would be able to pull it off,” said Bemrich, who competed for the Gaels at state cheer in the morning and state cross country back in Fort Dodge hours later. “When we hit our routine, I think we were all so proud of each other and excited that everything came together.

“After we celebrated for a few minutes, four of us (Bemrich, Shelly, Ash and Baker) had to leave (for state cross country), so we missed the awards for state cheer. When we were warming up for our race, one of my teammates told us the news and I think we were just in disbelief. It was an amazing feeling and the weight was lifted off of our shoulders. I’m so proud of my team and the obstacles we overcame to make this happen. There’s no better feeling.”

Like all cheer squads, the Gaels were pulling double duty of sorts in practicing to perform both for fall activities and the state competition. Barwin noted that after Homecoming, her team shifted most of its attention to perfecting the ICCA routines.

“I always say to the girls that they have to be game-day ready first and foremost,” Barwin said. “For a while, the (state preparation) was put on the backburner at times, so to speak. But again, it goes back to the work we did in the summer and the extra hours we put in (outside of formal practices). We even had a private Instagram (social media) account set up, where the girls were expected to learn from the videos we shared. In a way, it was like studying a playbook.”

Gailey called it a “perfect example (of) when you put in the time and hard work, it shows.”

“Going to the United (All-Stars) gym and the school and practicing late at night for a few hours most days of the week got us to first place (in the two events),” Gailey said. “We just built on the experience of last year (winning stunt group). It was very rewarding when we heard St. Edmond being called up (for the title).”

Barwin credited not just the athletes and their support systems at home, but also United All-Stars owner Mindy DeBaun and the other Gael coaches.

“Mindy really helped with choreography, and she filled in for me when my daughter, Andee, got sick recently,” said Barwin, a 1998 SEHS graduate. “I can’t thank her enough. And when we have people like (cross country coaches) Mike Szalat and Monica Shelly willing to share and work with us on the schedule (leading up to state) … we saw a long time ago that our competition and state cross country were going to be on the same day. They were both great about making sure everything was planned out so that there were no conflicts for the girls who were doing both.”

The path wasn’t always paved in gold. The moments of struggle and adversity defined the Gaels just as much as their finest hour, though.

“Everyone stepped up at different times and in different ways,” Barwin said. “There were definitely moments of stress or discouragement. But when someone was having a bad day, or they were sore, or tired, the group helped push them through in a positive way.”

Gailey and her teammates, meanwhile, lauded the leadership at the top.

“A big thank-you to Coach Barwin and Coach DeBaun fo rpushing us and believing in us,” Gailey said.

Barwin insisted the community’s success through the years in cheerleading — Fort Dodge Senior High has accumulated six co-ed state titles, three timeout crowns and two stunt golds in the last 13 years itself — is no coincidence.

“United All-Stars has been fantastic for building younger talent, and we have really strong dance programs and studios here in Fort Dodge,” Barwin said. “We’ve always worked well with the (Dodger program) to support each other. So many girls grow up dreaming of being a cheerleader. I remind our team all the time that they are role models and even celebrities in a way to the younger kids. How they act matters. They’re being watched and emulated, and if they do things the right way, (future cheerleaders) will want to be a part of that in the years to come.

The Gaels also grabbed third place in 1A timeout. Fort Dodge brought home a bronze trophy in 4A timeout.