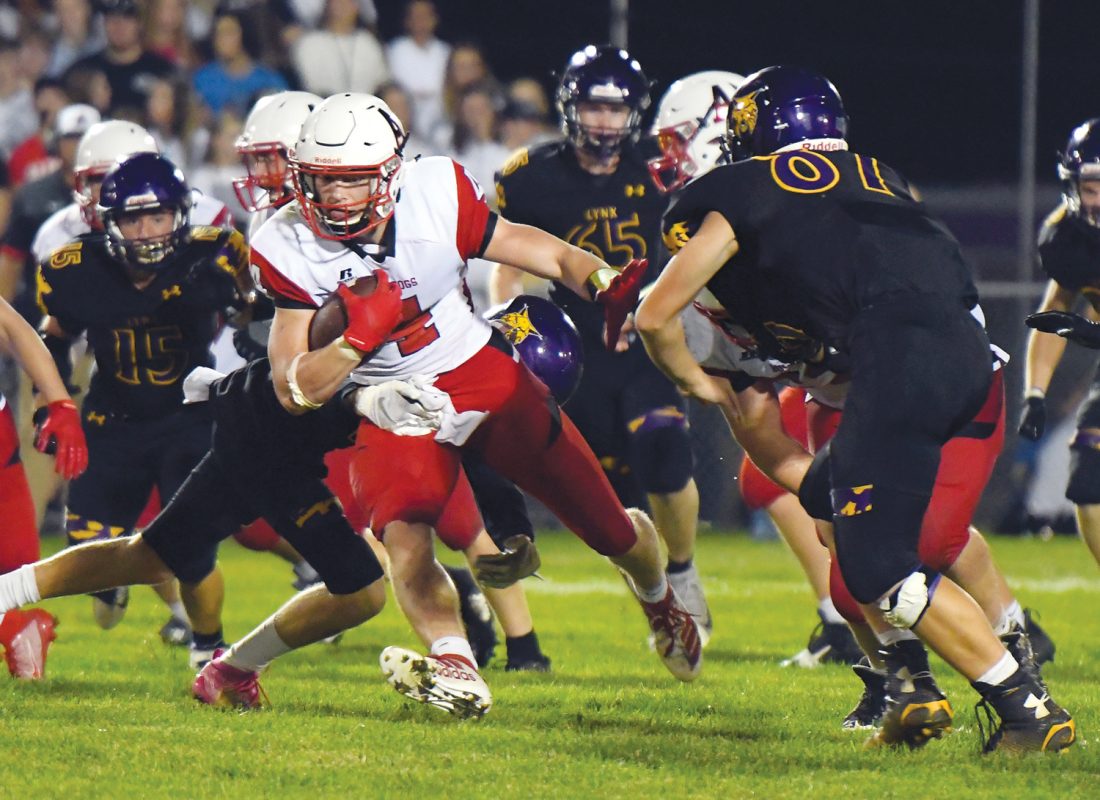 —Photo by Troy Banning, Daily Freeman-Journal Algona’s wyatt wegener, shown here against Webster City will be a key part of the Bulldogs’ charge in the Class 2A state semifinals on Saturday.

ALGONA — Todd VanOtterloo can recall competing at the state level as a member of the Algona basketball and baseball teams.

VanOtterloo, a 1999 graduate, is now the offensive coordinator and running backs coach for the semifinal-bound Bulldog football team.

Algona, a perfect 11-0, will take on OABCIG Saturday inside the UNI-Dome in Cedar Falls in a Class 2A contest. Kickoff is set for 4 p.m.

Just three short seasons ago, the Bulldogs went winless. They scored four victories in 2017 under head coach Andy Jacobson before improving to 9-2 a season ago including a victory in the playoffs.

“It means a lot to see the football program succeed,” VanOtterloo said. “All former players have had something to do with this. Algona definitely has had some great kids come through and as an alum, it makes you proud to be an Algona Bulldog.”

Jacobson, who graduated from powerhouse Aplington-Parkersburg in 2005, made the state field while playing for the legendary Ed Thomas. He took over in Algona in 2014 after spending time at Manson Northwest Webster.

“Coach Jacobson has brought a lot of positive traits to our football team and school,” VanOtterloo said. “His positive attitude, developing positive relationships with student/athletes and caring attitude has been very important.

“He has definitely brought some of what he learned from Coach Ed Thomas. Coach Jacobson has been great for our school and community.”

After winning one game that first season, Algona went 5-5 in 2015. They were 0-9 in 2016 and 4-5 a year later, as many of the key players from both last year and the current season saw the field as underclassmen.

Wegener and Lewis are both coming off all-state seasons and have continued to lead by example. Wegener has 1,920 total yards and 29 touchdowns this year, averaging 15.6 yards per play.

Lewis is the leading tackler with 72 stops, including 11 for loss and seven solo sacks.

Despite that, VanOtterloo says the individual numbers of the group are not as important as the team goal.

“It has been a lot of fun working with this group,” he said. “We have a lot of kids that have put in the work to get better each day. This group does not care who gets the credit.”

VanOtterloo was a multi-sport standout for Algona, helping the football team go 6-3. He competed at state basketball, track and baseball.

“One of my best memories in high school was the friends I made while out for sports,” he said. “As for playing, getting the chance to compete in Vets Auditorium at state basketball was great, along with playing at the state baseball tournament, running at state track and going 6-3 in football.”

Like his players, VanOtterloo is anxious to get to Saturday and begin the game with OABCIG. The winner advances to play for the 2A state championship next Friday against either Waukon or Williamsburg.

“It will be very exciting,” VanOtterloo said. “I am sure I will have some goosebumps taking the field with these players and coaches. Most importantly I am happy for current and past football players, our school and community that we get to experience this.

“It’s going to be great for the town of Algona.”