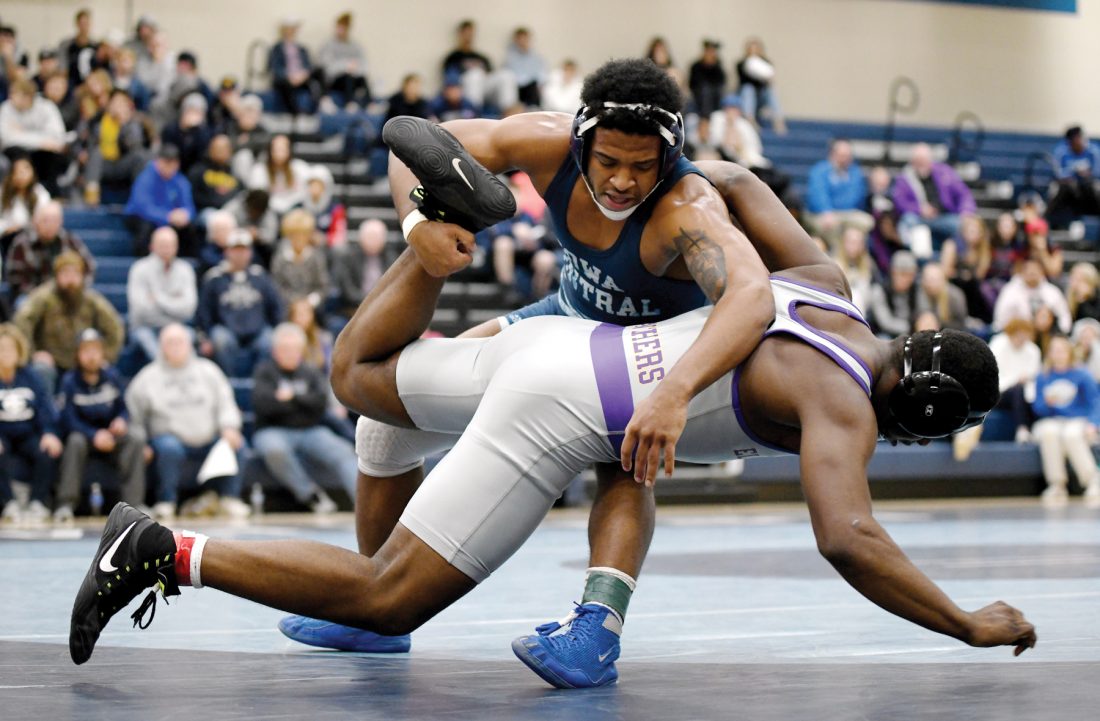 The Iowa Central wrestling team made the most of their first opportunity to shine in front of the home crowd.

Behind seven wins, the eighth-ranked Tritons posted a 28-13 victory over No. 5 Ellsworth inside Hodges Fieldhouse.

“It’s still so early in the year that I can only look at where we have to get better,” ICCC head coach Luke Moffitt said. “We had some individuals who didn’t perform where we have seen them perform before so that is frustrating.

“But at the same time, we’ll take a win when we can get one.”

After starting the season in open tournaments and on the road at Iowa Lakes, this was the first home action for the Tritons (2-0 overall, 2-0 in league). They scored seven bonus points and recorded 15 takedowns.

“For some of these guys that are in the room, they haven’t been able to travel and see us wrestle,” Moffitt said. “It was good for them to see the dual aspect of the season because that is what tightens the team up.”

Vargas started the evening off with a 16-6 victory at 133 pounds over Christopher Busutil, as the sophomore recorded six takedowns.

Tellez, a freshman, earned the biggest win of his Iowa Central career to date, knocking off No. 1 Hector Candelaria, 8-5. Candelaria was a national runner-up last year.

“I was waiting around all day for Ellsworth to send in the roster and see if they would wrestle him,” Moffitt said. “I’m glad they did because that gave Bobby the opportunity to knock him off.

“This should be a boost for his confidence and something to build from.”

While the initial lineup and pre-meet introductions had Ross earning a forfeit at 149, the former Fort Dodge Senior High state medalist would claim his win on the mat.

Ross was taken down in the opening seconds by Antonio Mills, but the freshman remained calm and waited for his opening. He rallied to score the fall in 4:01 for his first collegiate win.

“That was good for Drevon to get a win under his belt,” Moffitt said. “Especially in a dual in front of the home crowd. I really thought his victory gave us some momentum.

“Drevon is a slugger who likes to go for the knockout punch. We’ve got some things to work on still, but this was a big step for him.”

Gamble followed with a 7-5 decision over Justin Maynard, when he earned near-fall points in the final seconds of the match.

“Those two matches (149 and 157) were definitely big swings towards us winning the dual.”

Eyler, ranked No. 1 at 174 pounds, controlled Cameron Nesbitt for an 8-2 decision, Bostic picked up a 5-2 victory over Trayvonne Jackson and McDermott ended the night when he pinned Darrell Mason’s shoulders to the mat in 4:37.

Next action for Iowa Central will be on Dec. 4 when they host No. 2 North Iowa Area and Minnesota West in a triangular at 6 p.m.