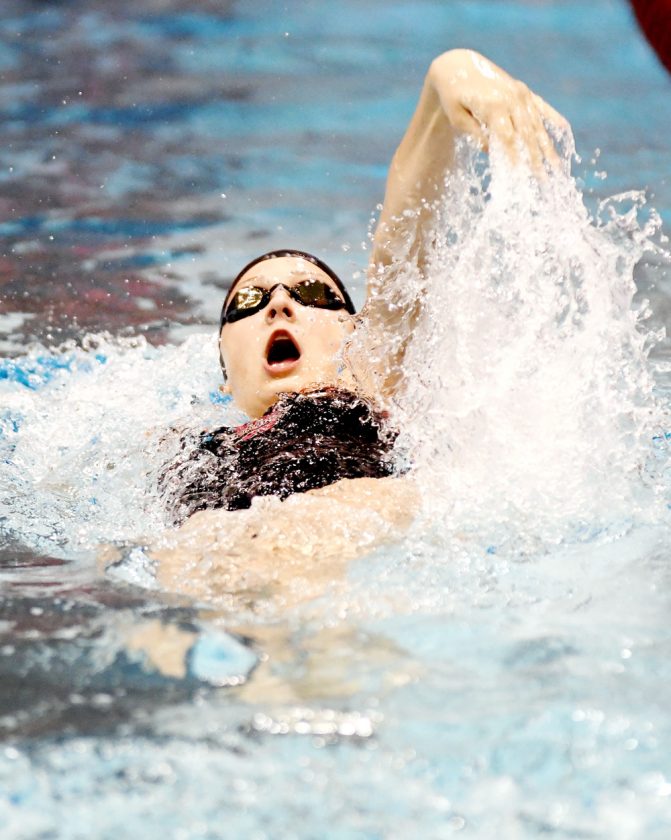 Messenger photo by Britt Kudla Eileen Fierke of Fort Dodge competes in the Dodger pool during the regular season.

The early-morning practices and late-night workouts may have been rugged, but the Fort Dodge girls swim team is reaping the benefits from their time and effort now.

The Dodgers will compete in nine state events on Saturday in Marshalltown. Fort Dodge will be entered in two relays and seven individual events.

“I will be really proud to represent Fort Dodge at state,” Hartley said. “I am excited to showcase all the hard work that we have put in throughout the season.”

The Dodgers, who have won a program record nine duals in 2019, have been getting better each time out, and that showed on Saturday during the regional event in the Dodger pool.

Eight-time defending state champion Ames was the regional titleist, while the Dodgers were fourth.

Fort Dodge set season-best times in seven of the nine events qualified, clocking their best marks in both relays. Peimann, Hartley and Eileen Fierke qualified in both relays as well, giving them four state berths.

“(The regional meet), and this season in general, is something I will never forget,” Peimann said. “I think what has really brought this team together was everyone’s personalities and attitudes toward one another.”

Hartley was the regional runner-up in the 500 freestyle.

“It was really rewarding to qualify in four events, because I know that not only have I been working really hard, but the whole team has,” Hartley said. “We had pretty tough workouts this season, but I think just pushing through those as a team has made us closer.”

“It was awesome to that Eileen started out so well and qualified in the 200 free,” Beaumont said. “She was able to kind of relax knowing she had qualified, but she was still able to push. It gave her confidence for the rest of the meet.

“I’ve only had one other freshman qualify for an individual event in my six years. She is going to do big things for Fort Dodge.”

“With Madigan, we went back and forth on what she should swim for regionals. She has been a good leader for us and will compete in four events,” Beaumont said. “Grace did a terrific job. Elora qualified in the 200 IM last year, and has been great for us as a captain.”

The quartet of Peimann, Hartley, senior Rylie Steinkamp and Eileen Fierke also had their best time in the 200 freestyle, finishing in 1:42.25 — the 19th best in state.

The quartet of Eileen Fierke, Hartley, Elora Fierke and Peimann dropped four seconds in the 400 freestyle relay (3:41.10), which is the 12th-best qualifying time in the state and a regional runner-up.

“It’s nice to get two relays in as well, knowing we swam against the best team in the state is a huge accomplishment,” Beaumont said. “Rylie is an amazingly hard worker who continues to impress.

“She has been pushing to continue to drop time in her freestyle.”