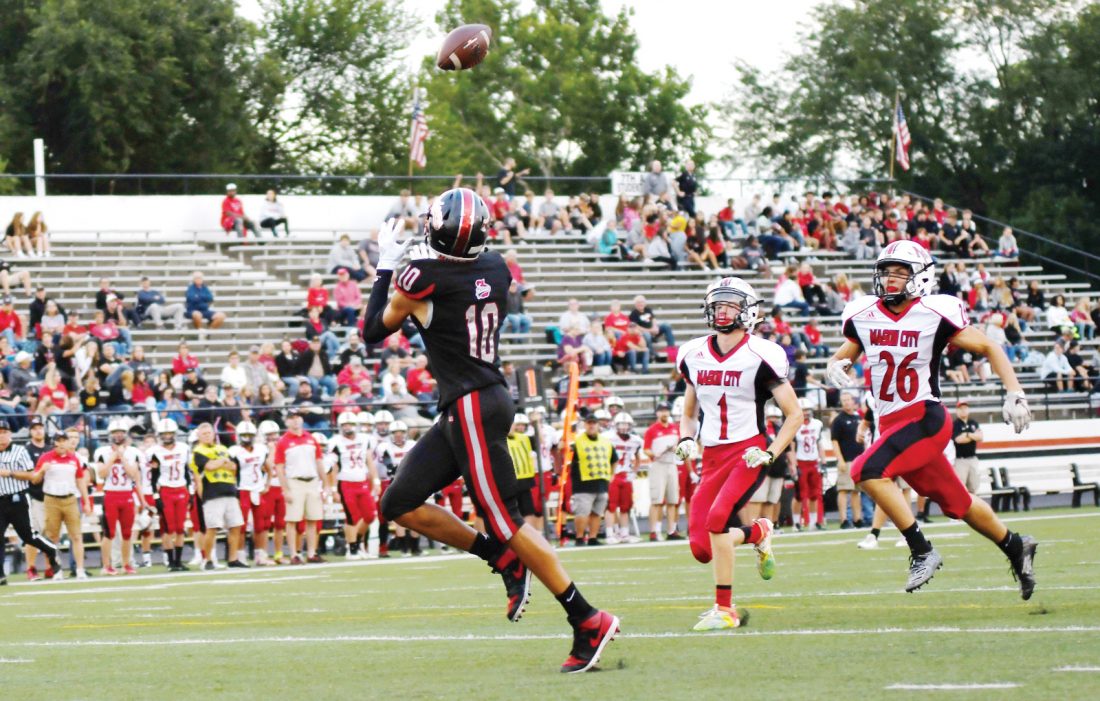 Messenger photo by Britt Kudla Tysen Kershaw of Fort Dodge makes a catch for a touchdown against Mason City earlier this season.

For the sixth time in the last 11 years, No. 11 seed Fort Dodge (6-3 overall) has posted a winning record and reached the postseason under Miller’s direction. Though the program is making its first-ever trip to Cedar Rapids — facing a school from the City of Five Seasons for the first time at all since 1956 – and squaring off with an unfamiliar opponent, Miller was able to draw plenty of flattering comparisons when scouting the 8-1 Cougars on film.

“They remind me of a really good Cedar Falls or Waukee team,” said Miller, who became the school’s all-time career wins leader last week in his FDSH-record 16th year at the helm. “They’ll line up and run the ball right at you with a talented, deep backfield and a physical offensive line. Defensively, they’re aggressive and they come after you.

“We’re going to have our hands full. I think Kennedy is right there with (8-1 Ankeny) Centennial and (9-0) Cedar Falls, maybe one step below (No. 1 and 9-0 West Des Moines) Valley and (six-time defending state champion and 8-1 West Des Moines) Dowling. They just play good, smart, fundamentally-sound football. They’re confident that their best is better than your best without gimmicks or a lot of unexpected plays.”

While the fifth-seeded Cougars rank in 4A’s Top-3 for rushing yards (2,918), yards per carry (8.0), rushing touchdowns (39) and rushing attempts (363), the Dodgers will need to rely on their passing game even more than normal with junior all-state tailback Dayson Clayton sidelined by an ankle injury. Kennedy has kept the ball on the ground for over 80 percent of its offensive snaps this season, while Fort Dodge has been much closer to a balanced number in its playcalling.

“We’re going to have to be effective throwing the ball, especially with Dayson out,” Miller said. “I’m not going to downplay how much that affects us. It’s a big factor. But it is what it is, and we’ll press on. (Sophomore) Jon (Presswood) has been solid when his number has been called.

“We obviously have to play mistake-free football, and we need to take advantage of the opportunities (presented to) us. Our defense has been really good all year at taking the ball away (Fort Dodge has forced a 4A-high 31 turnovers, which is the second-most in school history), and for us to be in it, we’ll have to make some things happen on that side of the ball again.”

Senior Brandtley Koske has 636 yards on only 32 carries — an average of nearly 20 yards per attempt.

“A lot of their success is because of their talent (in the offensive backfield), but a lot is also because of how good they are up front,” Miller said. “I think it’s important that we try and force them into some sustained drives, because they have some big hitters who can break off large chunks of yardage at a time.”

Fort Dodge senior quarterback Asle Thorson has thrown for 1,504 yards and 17 touchdowns, while scoring 10 times on the ground as well. All-state senior wideout Tysen Kershaw has 45 catches for 538 yards and eight TDs.

The 155-mile trip in sub-40 degree weather to face another Top-10 school size-wise — Kennedy is ninth in the state in enrollment, compared to Fort Dodge at No. 38 — is obviously a challenge for the Dodger program, which has just one playoff win under the modern format adopted in the early-1980s. Miller countered with the reminder that “almost 30 other schools in 4A alone would love to trade places with us right now and be in the (Top-16).”

“We want to just go give it our all and see where we stand by the end of the night,” Miller said. “We’ve had a strong week of practice and preparation. We’re looking forward to it. Hey, it’s playoff football. There’s a lot to be excited about.”

Friday’s winner will meet either Centennial or Urbandale in the 4A quarterfinal round on Nov. 8 at a site to be determined.