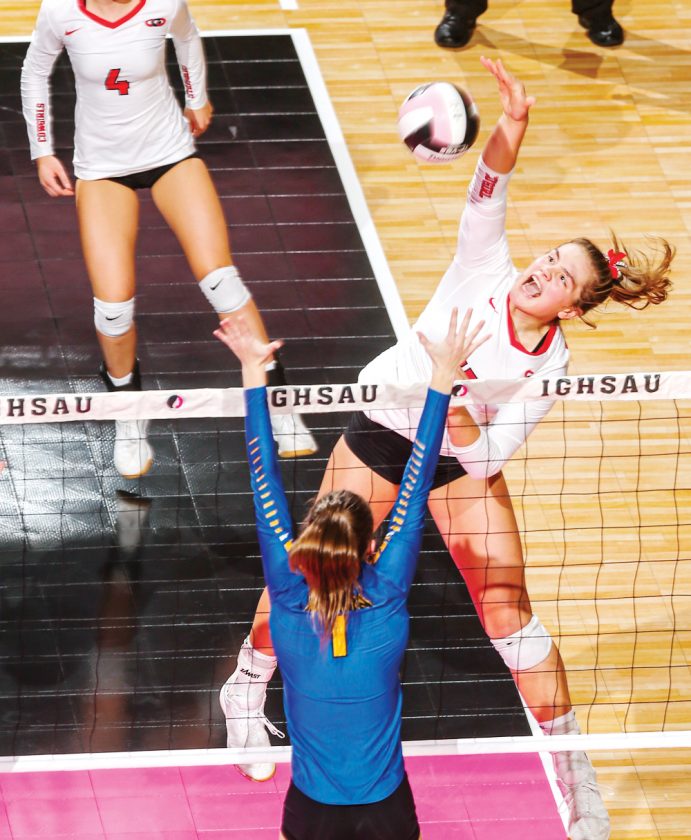 Photo by Andy Abeyta, The Gazette Morgan Middleton of Clarion-Goldfield/Dows earns a kill against Wilton in a Class 2A state quarterfinal match on Wednesday afternoon in Cedar Rapids.

CEDAR RAPIDS — It’s already been a historic run for the Clarion-Goldfield/Dows volleyball team, and the Cowgirls aren’t done yet.

C-G/D, which is playing in its second straight state tournament and fourth overall as a program, won a tight first set and then took care of business the rest of the way.

“Last year we came down and lost to the No. 1 seed (in 3A), who eventually won the state title,” said CG-D head coach Katrina TerHark. “One of our goals was to get back and (secure) a victory and continue to advance down here.

“We played so hard and so well. It was phenomenal. We just showed great work ethic.”

In the third and final set, the Beavers got out to a 12-6 lead, but the Cowgirls closed on a 19-5 run to advanced to the semifinals.

“We told them when it hits postseason time, it’s a long way to 25,” TerHark said. “We can makes runs of three or four get a sideout and make another run. We did a great job of that.”

Wilton entered the state tournament winners of 14 of their last 15 matches. Thirteen of those were sweeps.

“I think just having the experience of being down here helped. We (arrived on) Tuesday, and the girls who haven’t been here got a chance to watch,” TerHark said. “Our serve/pass game was working really well. We were able to stay within our game, and our passing is what got us out of trouble and made their defense adjust.”

Junior Morgan Middleton, who entered the tournament third overall in the entire state for kills, shattered the state tournament single-match record with 34 on Wednesday. Junior Kendall Lienemann had 12 kills.

“I was pretty impressed with Morgan’s efforts,” TerHark said. “Alaina (Freisleben) came through big for us as well when were down in the third set, and Jadyn Jondle rattled off nine points (serving) to keep us in it.

“Our defense was so scrappy, and Lexie (Lane), Summer (Traub), Alaina and Kendall dove all over for the ball. We are a hard team to out-scrap.”

The Cowgirls, who have won nine consecutive matches in straight sets, will face second-seed Dyersville-Beckman (41-8) in the semifinals on Thursday. Action will begin at 4 p.m. inside the U.S. Cellular Center.

“Beckman is a great team,” TerHark said. “They have a great outside hitter who is a tremendous athlete. We have to contain her and get our serve pass game going.”