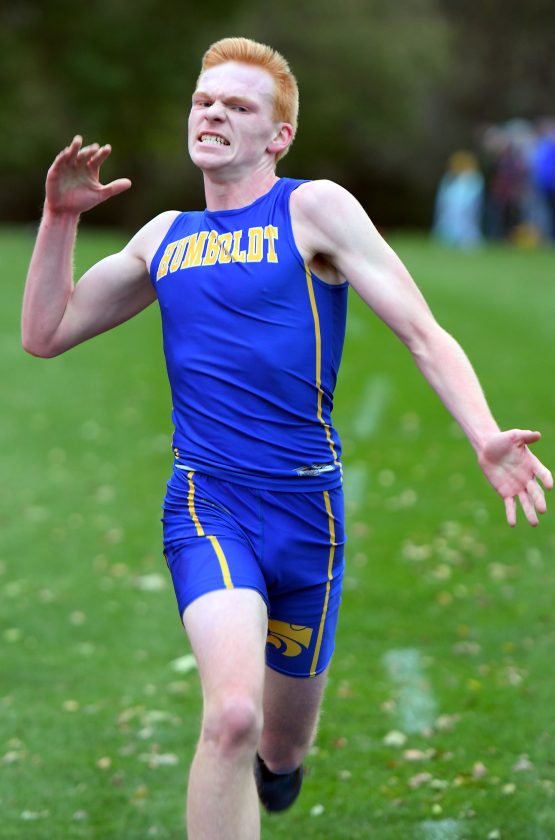 —Photo by Troy Banning/Daily Freeman-Journal Humboldt’s Quinton Orr celebrates as he crosses the tape at the NCC meet in Webster City.

A year after placing second overall, Orr climbed to a position he has become familiar with this season, capturing another invite title.

Wittrock was second and Coon third as the Wildcats defended their team crown from a season ago with Webster City placing second. St. Edmond was third followed by Clear Lake, Algona, Iowa Falls-Alden, Hampton-Dumont and Clarion-Goldfield/Dows.

“We as a whole team worked so incredibly hard this entire season and to run the times and earn the places we did is what it’s all about,” Orr said. “People see us running well, but it comes back to coaches believing in us and putting together good workouts for us and the leaders that changed the culture before I was even part of the high school program.

“I’m humbled and honored to finally be a NCC cross country champion and to be part of the team that also captured the title makes it even better.”

Humboldt now has six overall team titles since the first NCC meet was held in 1972, a mark that places them fourth behind Webster City, Eagle Grove and Algona. Orr’s championship is the sixth for the school and the first since 2006.

Jon Stover, Mike Staver, Jon Lindaman, Matt Lindaman and Nick VanLangen all previously were NCC champions from Humboldt. The Wildcats have had a first or second place finisher each of the past four years with Ryan Courtney and Joseph Kunert also earning silvers.

“This one feels so good,” Orr said. “Winning a conference cross country title is something I’ve been working on for a long time. It’s something I can finally check off the list.

“And to make it even better, my teammates were right behind me. It’s just awesome to be blessed with great teammates and a great culture.”

As a junior, Orr will have a chance next year to become the first repeat winner in the NCC since Ryan McMahon did it in 2009 and ’10. He clocked a time of 16:19 to top the field by over a minute.

Trevor Jacobson, a sophomore, was ninth and classmate Jackson Chambers was 24th for the Wildcats.