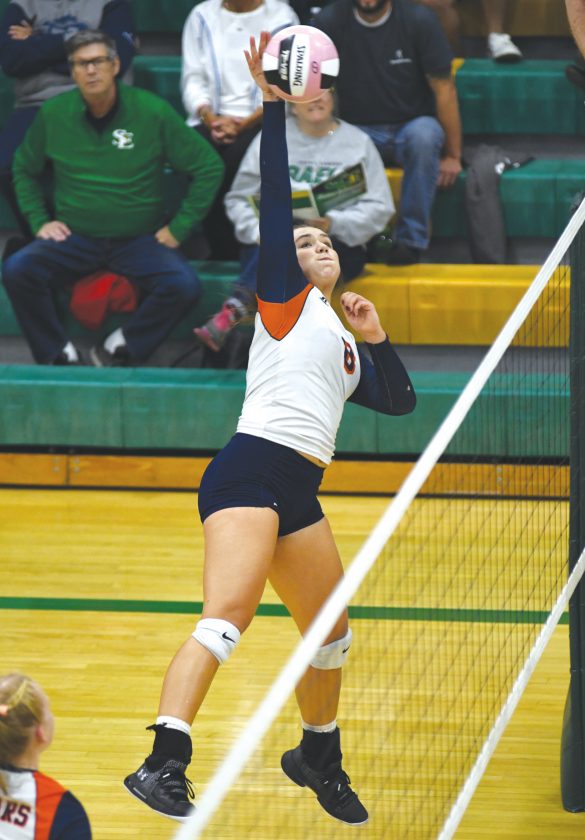 -Messenger photo by Britt Kudla Bailey Kenyon of Manson NW Webster goes up for a spike against St. Edmond on Tuesday in Fort Dodge

And thanks to a spirited rally in front of a strong group of supporters here Tuesday night inside the St. Edmond gym, she won’t have to.

Haupts missed the match due to illness.

“It’s great to be able to go home and tell her the good news,” Beneke said. “These girls just played their hearts out and left it all out there on the floor.”

St. Edmond (7-14 overall) raced out to a 9-1 advantage in the fifth and deciding set after forcing it with a rally in the fourth. Josie Huss had three kills in the first nine points and added an ace, with Leah Neverman recording a kill and Cambrie McBride an ace.

The Cougars (7-9), though, gained momentum when Chloe Troshynski came back on the floor. Troshynski, a 5-foot-10 senior, quickly reeled off a kill as MNW scored six consecutive points.

After a Huss kill and an ace by Maggie Conrad, the Cougars tallied five more consecutive points highlighted by an ace from Bailey Kenyon. Troshynski had three kills during the rally.

“We had them there in the fifth,” SEHS head coach Dee Huss said. “We just didn’t close the door. Once we gave them an opportunity, they took it.

“We got tight and stopped playing our game. It’s a tough lesson to learn, but shows just how important it is to continue doing what you need to do in order to be successful.”

Troshynski finished with 17 kills, as both Kenyon and Natalie Pearson added eight for Manson NW. The Cougars snapped a four-match losing skid and improved to 6-1 against St. Edmond in the last seven meetings.

“We’ve had a heck of a time here these last couple of weeks,” Beneke said. “But our goal this week was to go 2-0 and hopefully this sets the tone for us.”

Mya McClain had 18 digs, Huss had 10 and Kierstin Clark had nine. Both Milena Naughton and Cambrie McBride had six each.

“I’m so proud of these kids,” Huss said. “They are such a great group and I know they want to win so bad. We’ve just got to do a better job of keeping ourselves emotionally in-check during matches.”

The Gaels return to action Thursday for Senior Night back here vs. Humboldt, while the Cougars travel to Pocahontas Area the same night.