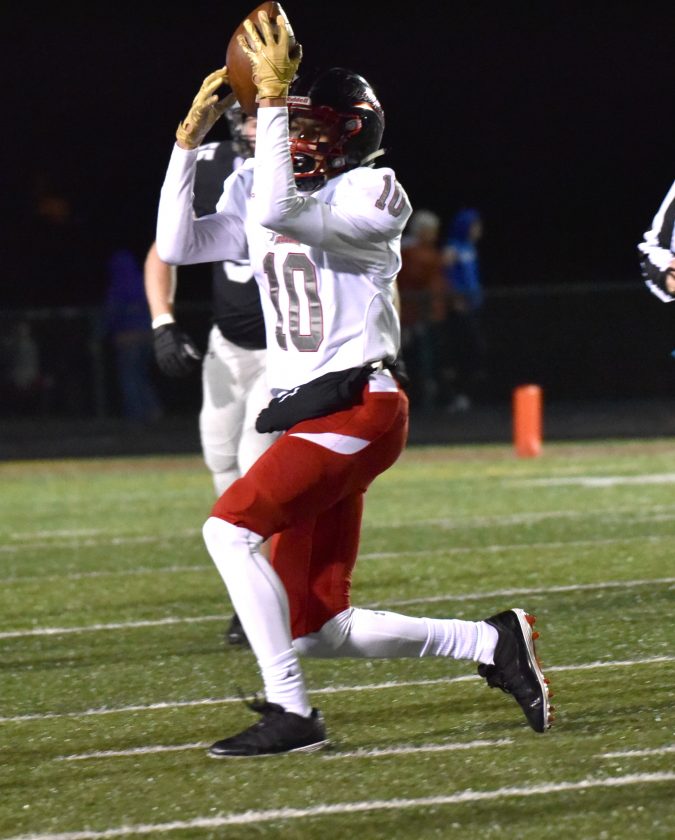 A third consecutive loss to a ranked District 2 opponent backed the Dodgers’ postseason hopes against the wall on Friday, as No. 4 (Class 4A) Ankeny Centennial dominated at the point of attack in a 56-29 victory on a frigid evening inside Ankeny Stadium.

At 4-3 overall, Fort Dodge now must win its final two regular-season games — both at home, against Sioux City West and Marshalltown — to reach the 16-team playoff field in 4A. A brutal mid-year stretch, starting with consecutive narrow losses to eighth-rated Southeast Polk and No. 7 Des Moines Roosevelt, was capped last night by the Jaguars’ punishing performance in the trenches and hypersonic all-state tailback Avery Gates.

So now the Dodgers’ gameplan is simple: win out and receive a postseason bid, or else.

“Our playoffs are here,” Miller said. “We’re battered and bruised, but we’re still standing. This loss stings, of course, but we need to flush it quickly and focus on what lies ahead. We have so much still to play for, and there’s no reason for us to throw in the towel — even if the outside world is giving up on us.

Centennial (6-1, 3-0) bullied Fort Dodge up front behind Iowa State University recruit Brady Petersen and his road-grader linemates. The Dodgers simply had no answer for the 6-foot-5, 275-pound Petersen, who wiped out any and everything to pave the way for the Jaguars’ daunting misdirection ground attack.

Gates, meanwhile, ran like he was shot out of a cannon. In the first half alone, the 170-pound senior speedster — who averaged over 13 yards per carry a year ago but has been limited since a Week 1 injury — found his rhythm and then some to the tune of 309 yards and five touchdowns on 17 carries.

Gates had bursts of 44, 38, 75 and 67 yards, often on simple counter plays triggered by Petersen’s clinic-like blocking.

“You just can’t simulate that kind of speed when you’re preparing for this team,” Miller said. “We saw it against them last year (in a 49-44 loss) and we just couldn’t contain it again (on Friday). Gates is a special player, and Petersen is in a class by himself.

“They’re the best team we’ve faced, and it’s not even really a question. When you take that line and give a guy with Gates’ speed a five-yard head start running downhill on turf…we had no answer for that.”

The Dodgers trailed only 28-14 with a minute left in the first half, but two late Jaguar scores — one to cap a grinding drive, and another after a fumble recovery on the ensuing kickoff — doomed Fort Dodge’s chances.

“That’s great for Tysen and our program,” Miller said. “He’s worked very hard to get to this point, and he’s been a mainstay in our offense for three years.

“We don’t want to lose sight of the fact that we’re still a darn good football team. Our goals (all remain) in front of us. Our season isn’t ruined.”

Junior Tyler Schreier quickly answered Centennial’s first score by taking the ensuing kickoff back 88 yards for a touchdown in the first quarter. Senior Asle Thorson completed 15 of 19 passes for 161 yards and the two TDs to Kershaw.

Senior Jake Laird and junior Kody Cook combined to recover a fumble late, which set up the last Dodger score in the final minute. Senior linebacker Levi Egli was the squad’s leading tackler.

Fort Dodge struggled on the ground without junior all-state tailback Dayson Clayton, who sat out with an injured ankle. While Centennial accumulated 433 of its 520 yards on rushes, the Dodgers managed just 15 total yards on as many carries.

“If you can’t win or at least make a difference up front in football, you’re in for a long night,” Miller said. “And they pushed us around pretty good. But we also need to remember how impressive they’ve been the first place.

“It’s time to reset. We have Senior Night coming up Friday (against the 0-7 Wolverines), so we need to get our confidence back and find our second wind here. I don’t think people realize how difficult it is to make the 4A playoff field. We have a chance to do it for the second year in a row and the fourth time (since 2014). That’s a big deal. We have to take care of business, because our margin for error is gone now.”