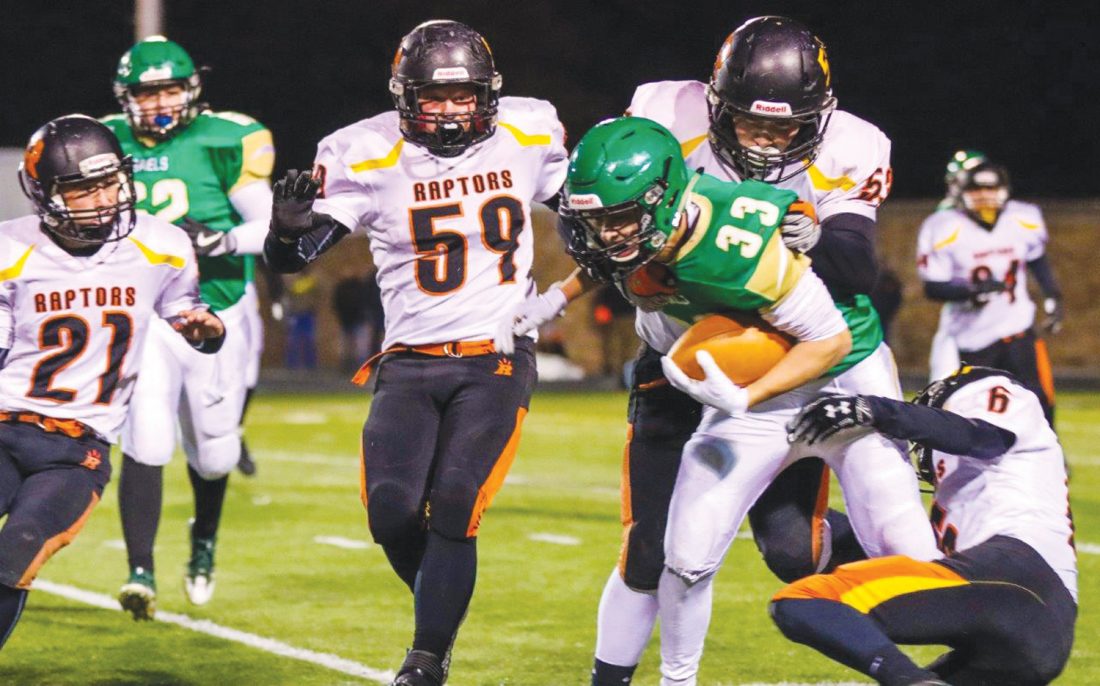 ALTA — The final two weeks of the regular season for the St. Edmond football team will see them hit the road, starting this Friday night against Alta-Aurelia.

Kickoff is scheduled for 7 p.m.

It’s been a tough four weeks for the Gaels (2-5 overall, 0-3 in Class A, District 2), as they have fallen to Bishop Garrigan, IKM-Manning, Sioux Central and Ridge View.

Despite that, second-year head coach Matt Dillon has been pleased with the attitude of his team.

“Nobody has given up on this season,” Dillon said. “We are still working hard and trying to get these two last games. We had a really good week of practice that was our first one not to be interrupted by something since before the Panorama game in Week 1.

“It’s tough when you are looking for answers and you have to constantly adjust what you are doing during the week.”

St. Edmond gave itself a chance last week, rallying against Ridge View. Drew Schaeffer, who threw for 142 yards and two touchdowns, had a couple of looks at the end zone on the final drive of the game.

Sean Flattery ran for 70 yards and Kase Baker had five catches for 68 with a score. Parker Oswald, a junior like Schaeffer, Flattery and Baker, had four catches for 50 yards and a score.

On the season, Schaeffer has completed 51 of 123 for 682 yards with six touchdowns. Baker has a team-high 730 yards from scrimmage and eight TDs, with Flattery adding 392 yards on the ground and six touchdowns.

Oswald leads SEHS with 20 receptions and has 257 yards.

“We have an underclassmen-dominated roster, but we aren’t looking or thinking ahead to next year or the future right now,” Dillon said. “We want to try and get our seniors these last two games and send them out in a positive way.”

Flattery leads the Gael defense with 50.5 tackles, Ethan Lursen has three sacks and 22.5 tackles, Jackson Bemrich has 39 tackles and a pair of sacks, and Baker has three interceptions.

St. Edmond has forced nine turnovers and recorded nine sacks as a unit.

The Warriors (4-3, 2-1) suffered their first district loss last week at IKM-Manning, 21-7. Prior to that, they topped both Manson Northwest Webster and Ridge View by a combined score of 68-25.

“We know they are going to be giving us max effort with it being their final home game,” Dillon said. “We’ve got to come out and match that effort, and try to stay ahead of the game.”

Anthony Krier is the leading rusher, racking up 490 yards and five touchdowns on the season. Logan McCoy has 237 yards and three scores, with Levi Sleezer adding 199 and Michael Ryherd 176.

Krier, who also has two punt returns for touchdowns, has missed the last two weeks.

The Alta-Aurelia defense has 12 sacks, seven interceptions and four fumble recoveries. Elston has four of those picks.

Last year, the Warriors went 7-3 and claimed the district title to advance to the playoffs. They were ousted in the first round by Avoca-AHSTW, 30-28.

Alta-Aurelia scored a 50-22 victory over St. Edmond last season. Krier ran for 170 yards on just eight carries, scoring two touchdowns as part of a 295-yard night for the team.