Cousins will each start at QB for MNW, Sioux Central 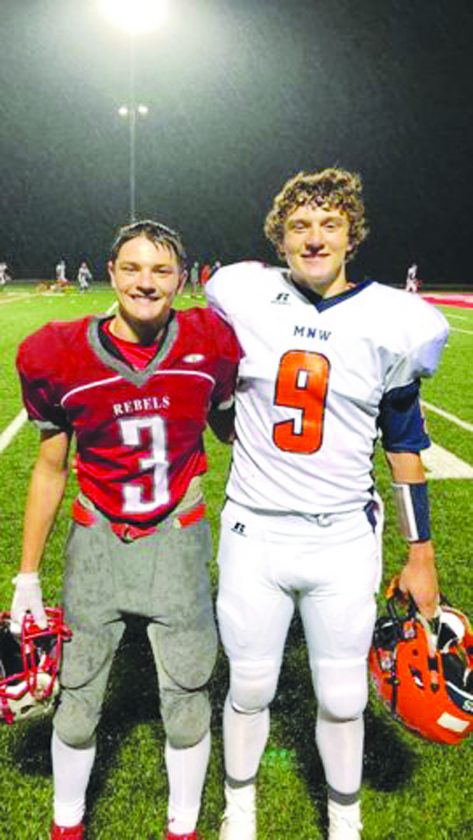 MANSON — Every weekend after playing under the Friday night lights, Austin Anliker heads to northwest Iowa to see how Sioux Central’s game went 60 miles away.

“We’ve been close all of our lives,” Austin said. “I go to his house and get to see how they’re doing.

“It’s great knowing we have family coming and supporting us, and that we will be talking after the game.”

The cousins have formed a strong bond through shared interests.

“They are really close,” said Manson NW head coach Jeff Anliker, Austin’s father and Jacob’s uncle. “Austin spends more weekends in Peterson than at home I think. Dawn’s (Anliker’s wife) mom is not in the best of health, so they go there and stay on the weekends.

Both Austin and Jacob are hoping to have the chance to gain the upper hand this Friday night when the two programs square off. One year ago, Anliker caught a two-point conversion over Saunders. Later in the contest, when Anliker came in to play quarterback, Saunders returned the favor by picking off an Anliker pass.

“It’s a big thing in our family, and we are expecting a lot of members to come watch,” Jeff Anliker said. “We have quite a few from my brother’s side coming from Wisconsin.

“It’s pretty much business as usual, but Austin is pretty excited and I know Jacob is, too.”

In his first full season under center, Austin helped the Cougars snap an 11-game losing streak in the first contest of the season. The Rebels (4-2 overall, 2-0 in Class A, District 2) have won two straight after starting 2-2, and they’re looking to improve to 3-0 in the district.

Saunders has rushed for 374 yards and five touchdowns, and has also thrown for two scores and recorded a two-point conversion. On defense, Saunders has 18 tackles, including five for loss.

Anliker is 71-for-130 passing for 528 yards and three scores and also has a two-point conversion. He has kicked a 37-yard field goal and recorded eight tackles.