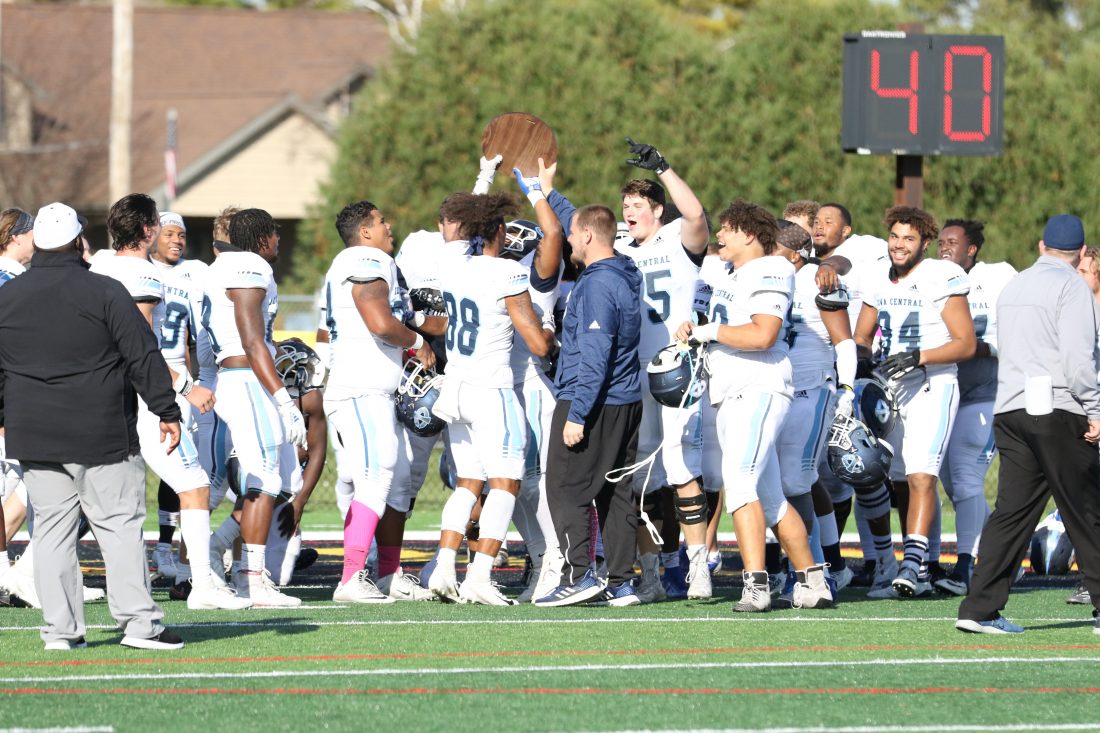 IOWA FALLS — For the first time in school history, the Iowa Central football team can claim to be ICCAC champions.

The Tritons earned the title with a commanding 51-6 victory over Ellsworth here Saturday afternoon at Cadet Field.

Iowa Central (5-4 overall, 2-0 in league) last won a league championship in 2007 when they secured the Midwest Football Conference title by going 7-1. The ICCAC was created shortly there after with the Tritons, Panthers and Iowa Western.

Earlier this year, Iowa Central ended a 10-year losing streak to the rival Reivers at Dodger Stadium, 28-26. They will play in the feature game of the Graphic Edge Bowl in Cedar Falls on Sunday, Dec. 8 at 3 p.m.

“This is big because everyone is going to remember this 2019 team for winning the conference title,” quarterback DJ Irons said. “We are going to enjoy this for 24 hours then get back to focusing on the next game.”

Irons ended a strong first half with a 49-yard touchdown pass to Terrell Carey, giving the Tritons a 23-6 lead. He also hit Jason Young for the first score of the game.

Grant Walker found the end zone on a 7-yard run after Colin Swygman booted through a 25-yard field goal.

After a blocked punt by the Iowa Central special teams, Irons hit Young for a second time resulting in a touchdown, with this one coming from 29 yards out.

“DJ looked exceptional and Chance Gibbons came in and gave us a great effort,” ICCC head coach Jesse Montalto said. “The kids came in well, focused and got after it. (Winning the league title) is great for everybody on campus from the players to the coaches.

“This is something they can remember forever.”

Irons threw for 298 yards with three scores and ran for 40 more. Christian Ford had three catches for 90 yards, Young finished with five receptions for 70 and the two scores, and Carey had three for 96 and a touchdown.

Gibbons finished with three second half touchdowns, including TD passes to Reece Gardner and Dan McDermott.

The win was the second straight for Iowa Central, which had found itself ranked in the Top-10 after starting the year 3-1. A three-game losing skid, though, forced the group to find themselves again before last Saturday’s game at Dodge City.

“It feels great accomplishing the conference title coming off a few losses,” Irons said. “I think the win (over Dodge City) built our confidence back up to where it needed to be.”

Iowa Central has won two straight over Ellsworth, with both coming under the direction of Montalto. The Panthers claimed three consecutive games in the series between 2015-17 when Montalto was the head coach there.

“This gives us something to build off of and remember the guys here now and for the future,” Montalto said. “We won eight games last year, but not the conference title. This year, we are sitting at 5-4 with the conference title and Kinney Cup in hand. Hopefully those are two things we can continue to hold on to for years to come.”

Next up for the Tritons will be Independence, the program most recently featured on the Netflix series “Last Chance U.” The Pirates, like Iowa Central, received votes in the most recent NJCAA poll.

They conclude the season at No. 15 Fort Scott, which is led by former Kansas quarterback Kale Pick, before returning home to meet fourth-ranked Hutchinson, who held the No. 1 ranking for several weeks earlier this year.