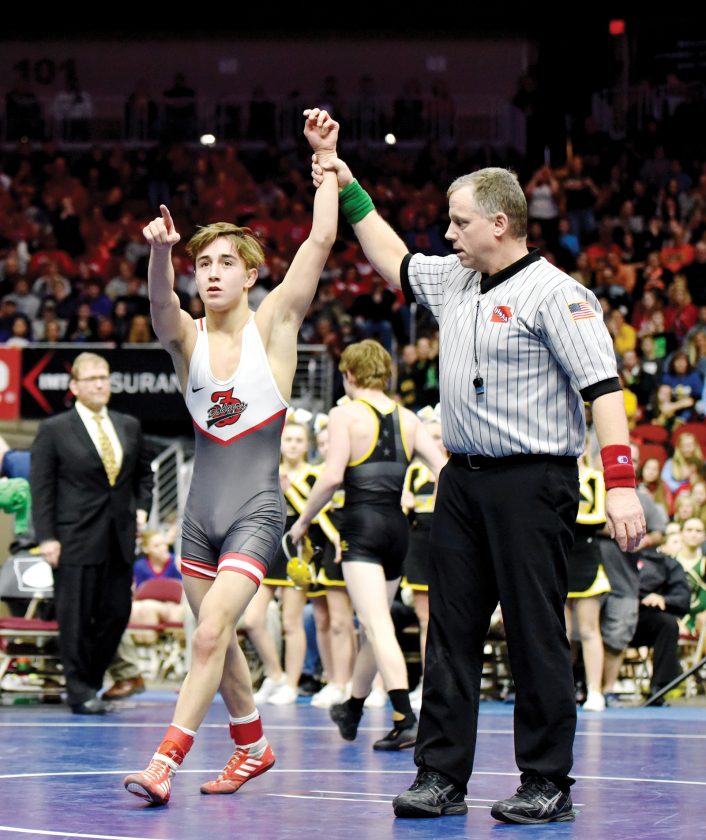 Messenger photo by Britt Kudla Fort Dodge's Drake Ayala points to the crowd after winning a state championship last winter for the Dodgers.

The pace both on and off the mat is really picking up for Fort Dodge’s Drake Ayala.

The Dodger junior state wrestling champion has established himself as an elite competitor on the national scene, and as expected, powerhouse programs from all across the country are taking notice. Ayala is headed to the prestigious Super 32 Challenge this week in Greensboro, N.C., where he finished as a runner-up a year ago at 106 pounds.

“My goal, obviously, is to win,” said Ayala, who will be registered at 120 pounds. “Being there last year, and getting that close before (settling for second) is both motivation for me and a reminder to know what to expect. I got a good feel for the environment and the surroundings, so I’m anxious to get back.

“With that being said, every tournament has a different feel and a different aspect to it. You have to treat each experience on its own and go from there, so it’ll be good to see where I stand (at 120 after predominantly competing at 113 last year).”

A number of blue-chip schools are already courting Ayala, who is now formally on the market as a junior at FDSH.Ayala has taken official visits to Iowa State and Michigan, and has officials planned later this fall at Iowa, North Carolina and Ohio State. He’s also been in regular correspondence with Northern Iowa and Minnesota.

Ayala is the nation’s No. 12 overall recruit for the Class of 2021, according to FloWrestling. He is a consensus Top-5 wrestler at his weight.

“All of the coaches have been super nice and really cool to get to know,” said Ayala, who was a perfect 43-0 last season as Class 3A’s 113-pound title holder. “Getting a chance to meet them face-to-face and having them visit your house … there’s an assumption that they’re too ‘big’ to talk to, but that’s not the case at all. They’ve been approachable and are very down to earth.

“It’s going to be a tough decision, no doubt. These are some of the very best wrestling programs in the country, so I’m going to take my time and respect everyone who has given me the opportunity (to be on their radar). It means a lot to me and my family.”

Ayala said he has no timetable for his decision at this point, and he also “wants to start to figure out and narrow down what I want to do (for a major), which will also impact where I end up going.” Ayala currently carries a 3.92 grade point average.

Ayala said he’s also “really looking forward” to the 2019-20 prep season. Fort Dodge, which has placed in the Top-3 at state for four consecutive seasons, is again expected to be one of Iowa’s premier teams this winter.

“We’re all excited,” said Ayala, who has an overall record as a Dodger of 88-2. “With so many state qualifiers (seven) coming back (Ayala, fellow champ Carson Taylor, Brooks Cowell, Lane Cowell, Kody Cook, Dreyzon Phillips and Savion Wheat), (former state placewinner) Levi (Egli) being healthy again, (senior) Austin (Lee), the other (returning starters) and some of the freshmen we’ll have in the mix, we aren’t going anywhere.

“It’s going to be a big year for Dodger wrestling. We’re hoping to be right there in the hunt again (for the team title).”

Only Ayala’s friend and training partner from Sebolt Wrestling Academy — University of Iowa recruit Cullan Schriever — has captured a Super 32 championship from the state of Iowa.

Ayala, already a two-time Fargo Nationals gold medalist, will be leaving on Thursday for Greensboro with his father, Sam, and younger brother, Knox. His eighth-grade brother, Dru, will miss the trip due to a broken foot.

Other Fort Dodgers in action will be Dreshaun Ross, Damarion Ross, Alexis Ross and Leighton McCrady.

Weigh-ins are on Friday, with action beginning Saturday and wrapping up on Sunday.