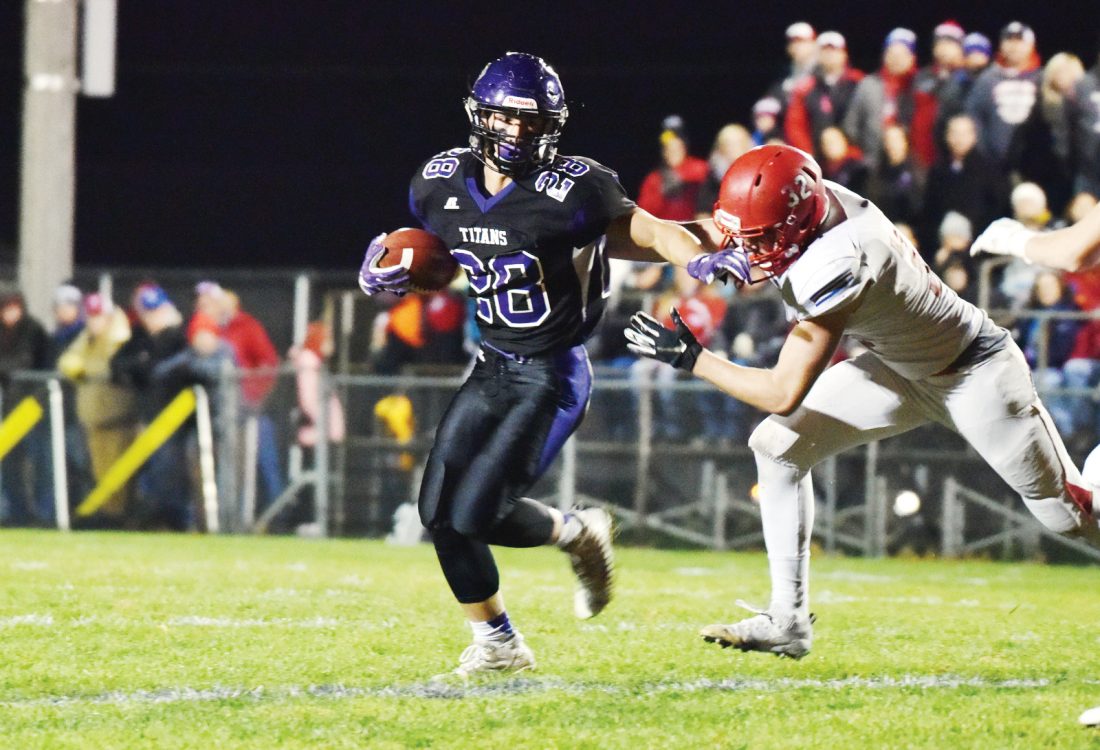 Opening week of the district slate for everyone outside of 8-man is now in the rear view mirror, as teams settle in for the stretch run now.

As we enter Week 6 of the regular season that also means we are one step closer to the release of the first Ratings Percentage Index of the year, which will help to determine at-large playoff qualifiers.

Fresh off claiming the first win of the season, Humboldt welcomes in 10th-ranked (Class 3A) Dallas Center-Grimes. The Mustangs won just one game last year, but have won four of their first five this season.

Southeast Valley, which reached the postseason a year ago, moved into the 2A Top-10 at No. 10 following a win over Clarion-Goldfield/Dows, 34-6. Spirit Lake, meanwhile, was within seven points of beating both the Jaguars and Algona last year in district play.

Sitting just outside the 1A Top-5 is South Central Calhoun, as Bryan Case’s program just continues to dominate on all sides of the ball. The Titans have allowed just 21 points this season and scored 204.

They will face one of their toughest tests to date in South Hamilton, as the Hawks are 3-2 and have won three in a row. They reached the postseason last year and played SCC to a 14-8 decision.

Bishop Garrigan had its 25-game district win streak snapped last week to No. 1 West Hancock, and the Golden Bears find themselves in a pivotal showdown on the road at Belmond-Klemme this Friday.

If you were able to secure a win in the district opener, this week presents the chance to really distance yourself from the pack with a second. Those in search of league victory No. 1 will be facing a must-win contest.

Here’s a look at some of the key games around the area, along with the entire slate of action:

Caden Grimes is his top target, as he averages over 25 yards per catch. Isaac Boley and Cody Hall each of 13 receptions, with Zach Brand and Luke Busby rushing for a combined 239 yards.

The Mustang defense is where the key is for this game, as they have recorded 17 sacks, including five by Jayme Augusma and four each from Jacob Waldron and Blake Willey.

Humboldt, though, presents a challenge with speedy back Jamison Heinz. The senior has 437 yards rushing and five touchdowns, with four catches for 43 more and a score on offense. He is also dangerous in the return game, averaging 23 yards per kickoff and 12.6 per punt.

Jacob Thurm has completed 36 passes for 435 yards, hitting Gabe Gidel and Caiden Baker for over 100 yards each.

Breaking into the Top-10 this week, Southeast Valley will hit the road for the second consecutive Friday and third over a four-week stretch.

The Jaguars had no trouble bouncing back from a loss to No. 6 (1A) South Central Calhoun, dominating Clarion-Goldfield/Dows, 34-6.

Senior quarterback Hunter Kruse completed 10 of 14 passes for 150 yards with three touchdowns and a 232.1 quarterback rating, Laethe Muench ran for 93 yards and a score, and Kolson Kruse had two touchdowns on his four catches.

Kruse is completing almost 62 percent of his passes with twice as many touchdowns as interceptions. Muench is over the 500-yard mark and both Chase Swieter and Kolson Kruse have over 200 yards receiving.

The Indians have lost their last two by a combined 12 points after starting the season 3-0.

Brent Scott is 99-for-153 for 1,236 yards passing and 11 touchdowns with just two picks. He is also the leading rusher on the team with 241 yards and five more scores, with Gavin Harms adding 227 yards and two TDs.

Scott looks to Joe Stein the most, as Stein has 31 receptions covering 522 yards and five touchdowns. Three other players have over 100 yards receiving.

Last year, though, Spirit Lake gave Southeast Valley all it could handle before falling in a shootout, 48-41. Kruse threw for 166 yards and all-state running back Kyler Fisher ran for 269 on 44 carries with three scores and another through the air.

It is hard to find a more dominating team through five games than Bryan Case’s Titan unit. They have allowed just 21 total points and have scored at least 30 in all six games.

Nine different players scored touchdowns in a win last week over Ogden, including three by leading rusher Landon Schleisman. On the year, Schleisman has 342 yards on 43 carries with seven touchdowns, all while anchoring the defense with five sacks, three solo tackles for loss and a dozen assisted tackles for loss.

Blake McAlister is averaging a first down each time he touches the ball and has scored four touchdowns, with Zane Neubaum hauling in 216 yards on 10 receptions.

Cole Corey has taken advantage of his array of weapons, completing 34 of 56 for 562 yards with seven total touchdowns.

The Hawks have reeled off three consecutive wins, besting Woodward-Granger, Manson Northwest Webster and Madrid by a combined 92-26.

Last year in Jewell, South Central Calhoun hung on for a 14-8 victory thanks to three turnovers and rushing TDs by Schleisman and Brennan Holder.

The Golden Bears will need to be at their best from here on out to keep their postseason streak alive following a loss to top-ranked West Hancock last week.

Bishop Garrigan rebounded nicely from a loss in the season opener to Emmetsburg, reeling off three consecutive wins over Mason City Newman, Lake Mills and St. Edmond before running into the Eagles.

Belmond-Klemme has posted a 1-2 record in its last three, topping North Butler around setbacks to Southeast Valley and West Fork, with the latter coming by a single point last Friday.

The Broncos feature former Clarion-Goldfield/Dows standout Jaace Weidemann, as he has rushed for 1,019 yards and scored 12 touchdowns this year.