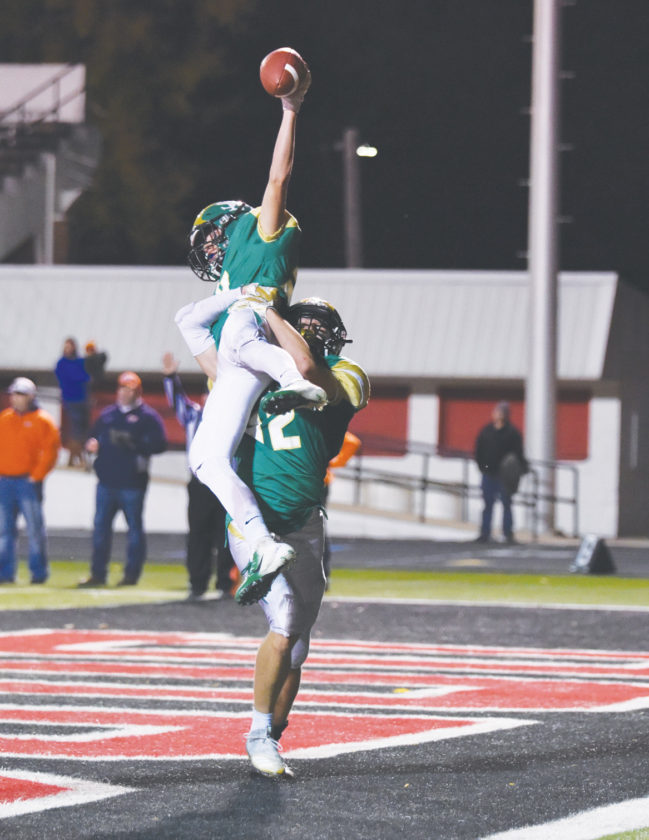 As a youngster, Jackson Bemrich watched from the stands as St. Edmond football climbed to their highest peaks in school history.

Now, Bemrich is the one tasked with continuing to carry the torch on the field for the Gaels as a senior two-way starter.

St. Edmond is off to a 2-1 start, scoring back-to-back victories over North Union and Eagle Grove with a home date vs. rival Bishop Garrigan set for this Friday night inside Dodger Stadium.

“It’s a blessing being able to follow in the footsteps of some of the athletes I got to watch growing up,” Bemrich said. “There’s nothing better than playing on Friday. The memories I’ve made under the lights are unforgettable.”

Bemrich is the leading tackler on defense with 20, including 18 solo stops. He also has two sacks and another tackle for loss. He is also a starter on an offense that has produced almost 700 yards and scored nine touchdowns this year.

As a junior, Bemrich finished second on the team with 71 tackles, which included 10 tackles for loss. He also recorded six sacks, a number that led St. Edmond.

That was also his first experience with SEHS head coach Matt Dillon, who led West Des Moines Dowling to great successes before coaching in Florida for a number of years. Dillon brought in former defensive coordinator Pat Schomberg this season and the two have made an impact on Bemrich.

“Coach Dillon has been an outstanding man,” Bemrich said. “Off and on the field he is all about becoming a better student, player and all-around person. And on top of that, he knows football like the back of his hand. I’m excited to see where he goes with the football program.

“Having Coach Schomberg back has really toughened the guys up. He’s hard on us, but at the end of the day, he’s just making us strong players. I have a lot of respect for our coaching staff and trainers this year.”

Bemrich was also a regular as a sophomore, recording 36.5 tackles with three being for loss. He made 16.5 stops as a ninth-grader.

Along with being a four-year letterwinner in football, Bemrich is also a member of the basketball team and a state qualifier in track. He is involved in choir and the Play Like A Champion group at St. Edmond.

“I want to be remembered as a leader,” Bemrich said. “And as the player who always played his heart out.”

Bemrich is undecided on his future plans.

Person I would like to have dinner with: my great grandpa Bemrich

I can’t go a day without: lots of food.

What are you listening to right now? A lot of rap and some country.