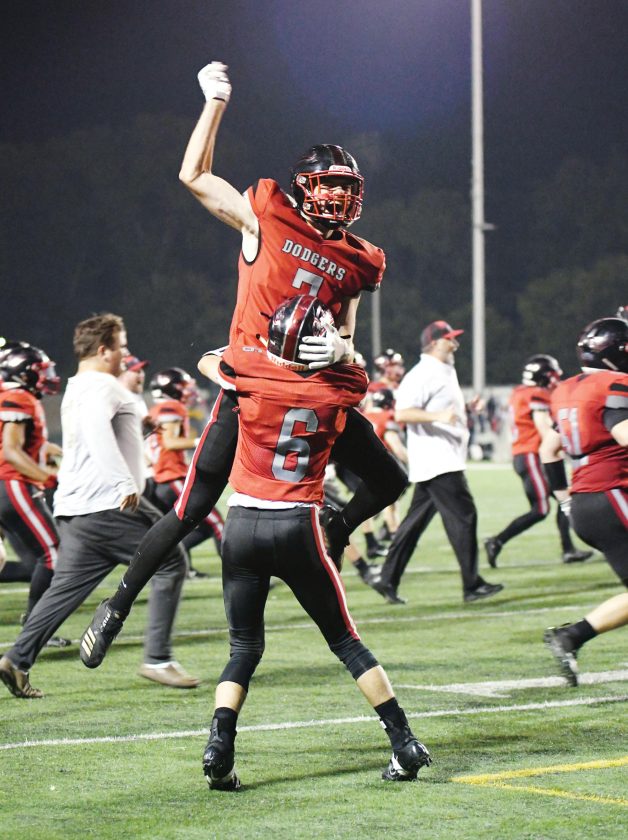 Fort Dodge used its talent to win the first two games of the 2019 season.

On Friday night, the seventh-ranked (Class 4A) Dodgers pulled through on sheer guts.

A heart-stopping goal-line stand in overtime allowed FDSH to escape with a 28-21 Homecoming victory over Indianola, as head coach Matt Miller’s squad found a way to remain unbeaten despite a performance with plenty of rough edges and frustrating moments.

An impassioned crowd of over 3,500 helped will the Dodgers (3-0 overall) across the finish line on a picture-perfect evening for football. And when the defense stopped Indian sophomore Kael Kolarik inches shy of the end zone on fourth down in the extra session to seal the triumph, a collective eruption from the stands accompanied an on-field celebration and a fireworks display that won’t soon be forgotten by those in attendance.

“I told the kids I think that ending took about five years off my life that I don’t have to spare,” Miller sheepishly smiled afterward. “The past few years (when FDSH dropped one-possession games to Indianola), I felt like maybe we were the better team overall but they found a way in the end. Well, we kind of reversed the roles with this one, because we just plain got out-played for the better part of three quarters.

“I tip my hat to them; (the Indians are) a tough, physical team. But I also want to give our guys a ton of credit for never panicking or giving up on each other. I don’t think there’s any doubt that the first two wins (65-0 over Mason City and 42-7 over Ames) got our kids thinking we were a little further along than we actually are. This was a reality check. But any time you make as many mistakes like we did and still find a way to come out on top…that’s part of what high school football is all about. Finding that way.”

Indianola (1-2) kept its gameplan simple with heavy doses of the 190-pound Kolarik, particularly over the right side of its offensive line. The Indians took a 21-14 lead on a Kolarik touchdown early in the third period, and the visitors were still on top and in possession of the ball well into the fourth quarter before senior linebacker Austin Lee recovered a fumble deep in IHS territory that helped turn the tide.

Junior tailback Dayson Clayton scored three plays later to pull Fort Dodge back to even, and the sides traded punts the rest of the way as regulation ended in a stalemate.

Starting the program’s first overtime session in 13 years with a bang, Asle Thorson found Tysen Kershaw in the back right-hand corner of the end zone from 10 yards out to put the Dodgers in front for the first time since the opening quarter. Indianola had a chance to answer and force another extra frame, but a false start and an incomplete pass backed the Indians against the wall.

With the fans already on their feet and FDSH players summoning even more noise from their supporters, the defense did just enough to keep Kolarik from hitting paydirt on the next two snaps. The stop put an exclamation point on an inspiring effort from the Dodger D late, which recovered three fumbles, forced two punts and secured the dramatic triumph in shutting Indianola out over its final six possessions.

The Indians were able to muster only 24 total yards from scrimmage during that stretch.

“Having to battle back and deal with the adversity you face in a close game was good for us,” said Lee, who also recorded two sacks. “We wanted to do our part to help bring it home (defensively), and we knew we didn’t have much room for error after giving up that touchdown (to start the third quarter).

“It was a pretty amazing moment, with the crowd and the fireworks and everything after we knew we had (kept Kolarik out of the end zone). It felt like it was our version of winning the Super Bowl. Just so much fun and such a cool moment, especially being a senior.”

The defense also came to the rescue in the first half after the Indians had scored 14 consecutive points and marched deep into Dodger territory. Senior linebacker Shane Halligan — like Lee, a three-year varsity regular — blocked a 27-yard field goal attempt that seemed to inspire both the offense and an anxious fanbase. Clayton ripped off a 34-yard run on the next snap, and Thorson scrambled 32 yards for a touchdown to quickly draw FDSH back to even.

“We have nine seniors starting on defense,” said Halligan, who also recovered a fumble. “We’ve taken the responsibility of doing our part and trying to make things happen that will shift (the momentum) of a game.

“We try to go by our ‘be nasty’ (mantra) and embrace that blue-collar Fort Dodge persona. We want to hit and hit and hit until (the opponent) doesn’t want to get hit anymore.”

Clayton (102 yards on 18 carries) and Thorson (71 on 14) both found relative success on the ground, though Indianola always seemed to swing momentum back in its favor just as the Dodgers were turning the tide. Thorson hit Nick Bice for a 37-yard TD barely two minutes into the contest, but points and yards were hard to come by the rest of the way for Fort Dodge.

Sam Daniel recovered the other fumble, while Pry’Shayn Mosley and Dalton Summers combined for a sack. Kolarik did rack up 148 yards on 27 rushes, but the Indians managed only 93 passing yards and negative-19 yards on the ground outside of Kolarik’s numbers.

“(Defensive coordinator) Blake Utley made some outstanding adjustments when we really couldn’t afford to give up much more,” Miller said. “Those last five or six possessions, they showed a lot of heart in a situation where we were kind of teetering on the brink of letting it slip away.”

Sophomore Gavin Schillerstrom made all four of his extra points, which became more and more critical as the night progressed. Schillerstrom, a first-year kicker, is now 15 of 16 on PATs so far this season.

In what has become a recurring theme against Indianola, the Dodgers couldn’t get out of their own way time and time again in committing 16 penalties — of all varieties — for 134 yards.

“I reminded our players all week that we have to do all the little things right,” Miller said. “But when you win like we did (over Mason City and Ames), I think that tends to go in one ear and out the other. You start to take things for granted and think you’ll just get the job done with talent or athleticism alone.

“Well, this was a wake-up call. We were undisciplined and not really sharp in the first half especially, and I don’t think we came ready to play like we had been. Lesson learned. We’re a ranked team right now that will continue to get the best shot (from our opponents). Carroll will want a piece of us after what happened last year. So will Southeast Polk, (Des Moines) Roosevelt and (Ankeny) Centennial. It’s not going to get any easier, so this definitely got our attention.”

Fort Dodge has now taken seven consecutive Homecoming decisions, and 12 of 16 overall under Miller’s direction. The Dodgers are 15-5 in Homecoming games since 2000.

The district held a moment of silence before kickoff in memory of senior Daiqualis Poe, who died at his home earlier this week. Dozens of balloons were released in his honor as well.