The face of ‘Iowa Nice’ 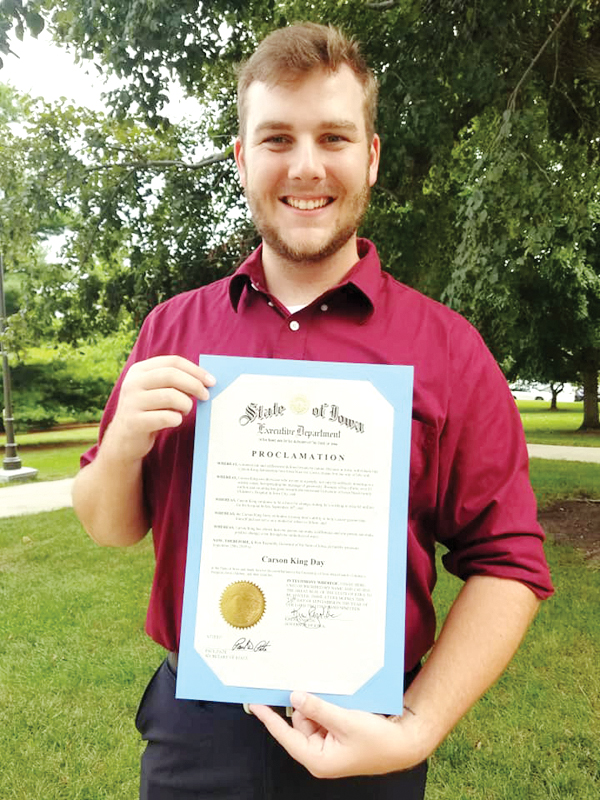 Submitted photo Iowa Governor Kim Reynolds has declared this Saturday "Carson King Day, in honor of his selfless generosity toward the University of Iowa Stead Family Children’s Hospital," according to her Twitter account.

Less than two weeks ago, Carson King was a random Iowa State fan from Altoona with a funny idea for a sign.

Fame works in mysterious and often unpredictable ways, though, especially in the day and age of social media. So when an ESPN College GameDay camera caught King’s sarcastic plea — “Busch Light Supply Needs Replenished: Venmo (an on-line avenue to give money) Carson-King-25” — people slowly but surely started to treat the request literally.

It didn’t take long for the everyday guy with an everyday background from an everyday Iowa community to become a nation-wide sensation. The donations were pouring in: first the tote board read in the hundreds, then thousands, then tens of thousands, then hundreds of thousands. Anheuser-Busch and Venmo pledged to match the amount raised, which bumped the total over a million dollars this past weekend. Local and regional businesses followed suit. ESPN anchor Scott Van Pelt made it the centerpiece of a SportsCenter segment, as did ABC’s “Good Morning America” and a host of others.

What was the hook? Well, very early in the game, the 24-year-old security worker at Prairie Meadows Casino noticed his message was — for whatever reason — taking off. “Going viral,” as they like to say. But instead of pocketing the money and cashing in on his unexpected 15 minutes of fame and good fortune, King turned his account into a fundraiser for the University of Iowa’s Stead Family Children’s Hosptial.

I want you to pay close attention to this. The young man who sheepishly asked for beer money — it was a joke, but not entirely inaccurate given King is in his mid-20s and just getting started in his professional life — looked at his exploding personal Venmo balance and decided it was best if all the funds went to sick kids in need of help.

The feel-good story of the year should have ended there. Because of Carson King’s generous heart and the often-magical powers of social media, over a million dollars (and counting) was being shipped to Iowa City via the unlikeliest of sources.

And then Tuesday happened.

Through what they identified a “routine background check,” the Des Moines Register unearthed two inappropriate Twitter posts King made as a teenager eight years ago. A feature story on King mentioned the tweets near the end of the article. Word quickly spread, and all hell broke loose.

The general public didn’t rush to the support of the Register, which claimed it was simply doing its professional due diligence by bringing King’s teenage comments to light, nor Anheuser-Busch, which severed future ties with King as a result of a few social-media mishaps. On the contrary: the love for King only intensified in the 24 hours following his press conference, where he owned up to the posts, apologized for some of the poor decisions made by his 16-year-old self, and took the high road in response to the Register’s controversial decision.

King’s old tweets, while admittedly unseemly, had nothing to do with his charitable drive. His past didn’t indicate a penchant for theft, or forgery, or money laundering, or anything that would be considered a red flag for this set of circumstances. And it’s not like King stepped into the public spotlight intentionally; he wasn’t running for public office, or trying to parlay this experience into some kind of professional leadership role.

He was just an Iowan who wanted to make the world a better place when his number was called.

As such, the overwhelming majority of people continued to lionize King while vilifying the Register. His legend didn’t fade, and his cause didn’t collapse. Instead, it intensified.

Why? Because there’s something reassuring about King’s altruistic story. Not necessarily because of the amount of money raised. And not because it wound up embarrassing a reputable media outlet which quite simply went too far in its attempt to report all the “facts” in their King profile.

And, quite frankly, we’re short on all of it these days.

There are many lessons to be learned here, of course. Don’t let social-media ghosts haunt you. Parents, talk to your kids about how permanent an online comment can be. Then heed the warning yourself. Journalists, make sure a deep dive into a subject’s personal life is done with a purpose and common sense. Businesses, there is such a thing as being too politically correct. Don’t always take the temperature of a room filled with the vocal minority.

The greatest lesson, though, isn’t necessarily the cautionary tale of Carson King at 16. It’s the one Carson King is teaching us at the still-tender age of 24. It’s never out of style to help others. It’s never too late to make amends.

And, as jaded and cynical as we sometimes seem to be, we’ll still root for an underdog all day long.

Eric Pratt is Sports Editor at The Messenger. He may be reached via email at sports@messengernews.net, or via Twitter @MessengerSports