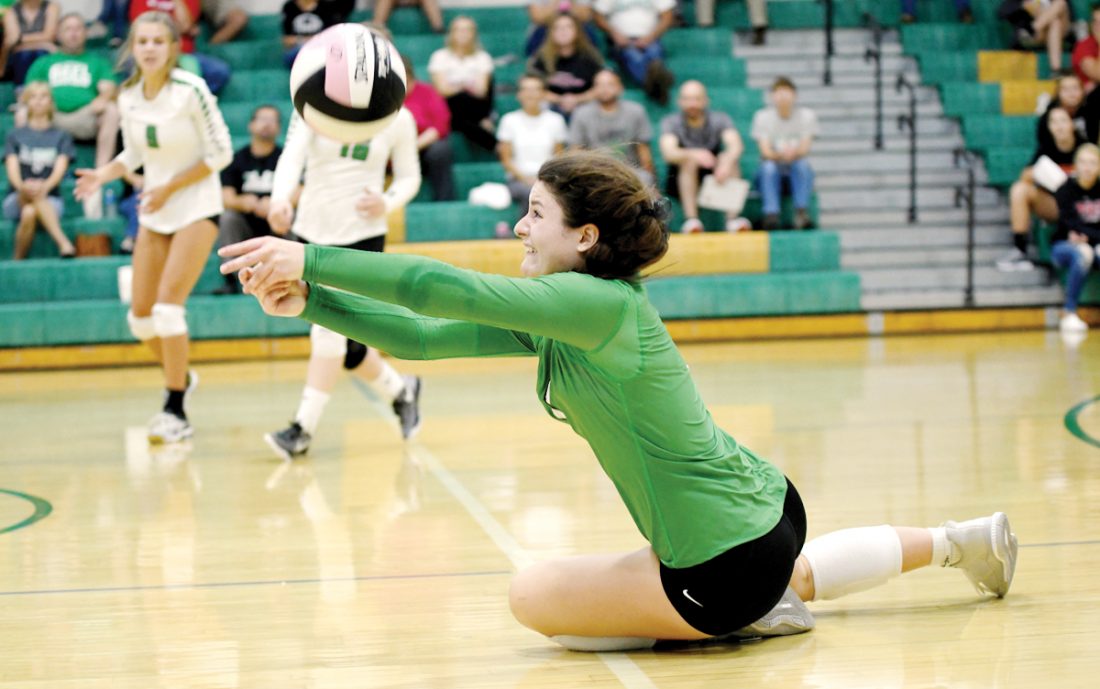 Messenger photo by Britt Kudla Mya McClain of St. Edmond dives for the ball against Hampton-Dumont on Thursday in the Gael gym.

When the St. Edmond volleyball squad was in a hole Thursday night, they looked to their senior captains for guidance.

The Gaels trailed 24-20 in the first set of their North Central Conference opener against Hampton-Dumont. That’s when captains Josie Huss and Cambrie McBride took the lead.

After being within a single point of going down an early set, the Gaels went on an 8-2 run to close out the comeback win at 28-26 behind McBride’s strong serve and Huss’ steady hand on the outside. With the Bulldogs leading 26-25, Huss delivered to kills and the Gaels prevailed, setting the tone for the rest of the match.

“They (Huss and McBride) are six-rotation players and they came through as senior captains and leaders,” said SEHS head coach Dee Huss. “They have to change from offense to defense, and they still do a great job.”

It was all Hampton-Dumont early in the first game, as they built a six-point advantage and reached set point three times in the opener.

“Our seniors just got back from a retreat, so they didn’t practice (Wednesday) and we just went through our JV and varsity rotations,” Huss said. “It took a while to get in a groove.

“We have to start strong and stay focused.”

There was eight ties in the second tilt as the teams battled through the first 16 points even. The Gaels went on a 5-0 run and built a lead that would hold up the rest of the way.

“We had great blocking out of Leah and Kacey,” Huss said. “We got great support from our pin blockers, and Isabel (Woodhouse) came on and and played well. I’m glad to see her get going.

“We have to put forth the energy and will carry through to the end. Once we got the lead (in set two), we didn’t let up.”

St. Edmond closed out the match with McBride behind the service line, though.

“It was back and forth (in set three),” Huss said. “We could have finished stronger, but we fought through (the late slump).”

“Everyone stepped up when they needed to,” Huss said. “We had big play from our seniors and and our underclassmen. Mya did a great job as a sophomore.”

Both senior Milena Naughton (11-for-11) and McClain (9-for-9) had perfect serving nights.

Kruthoff and Huss led the Gaels in kills with eight and seven, respectively. McBride and Neverman had four each, and Isabel Woodhouse chipped in three.

St. Edmond is back in action Thursday as they travel to Iowa Falls-Alden.