Ranked clash up next for FDSH 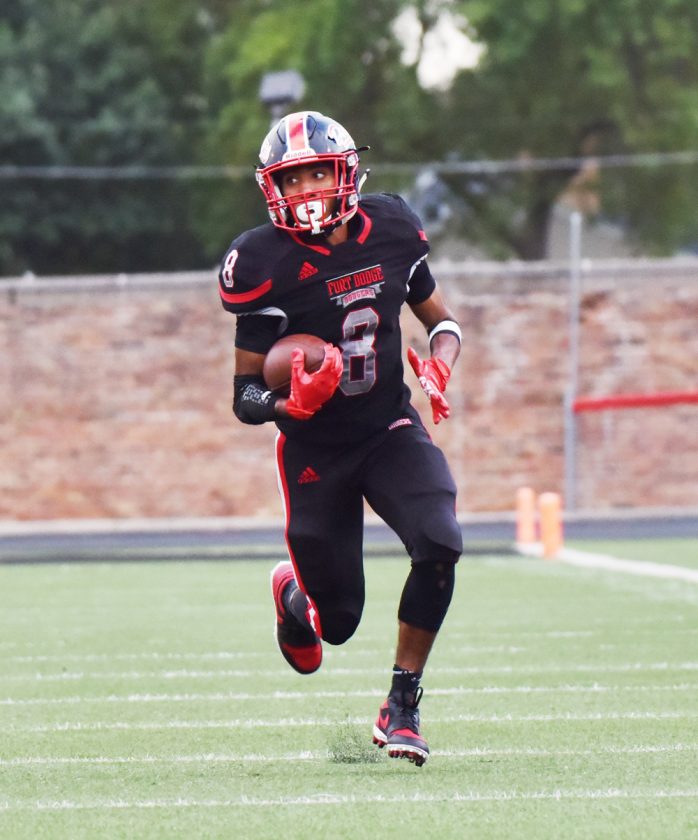 Messenger photo by Britt Kudla Brycen Bell of Fort Dodge returns an interception for a touchdown earlier this season.

After four weeks of testing the waters, the fourth-rated (Class 4A) Fort Dodge football team dives into the deep end of district play here Friday against No. 6 Southeast Polk.

Carrying the program’s highest ranking in 35 years, the Dodgers (4-0 overall) kick off District 2 action at home to start a three-week litmus test. After facing the 3-1 Rams, head coach Matt Miller’s squad hits the road for contests against Des Moines Roosevelt (3-1) and No. 5 Ankeny Centennial (3-1).

Fort Dodge sped through the pre-district portion of its schedule, currently boasting both the top scoring offense and defense in 4A with a month in the books. Miller knows they haven’t seen anything like what they will encounter the rest of the way, though, with three rated opponents and four programs currently sitting at 3-1 or better on the docket over the course of the next five weeks.

“I usually say things like, ‘it’s time’ and ‘we’re ready’ before (the season opener),” said Miller, who is a single victory away from tying FDSH legend Forrest Marquis as the school’s all-time leader for career coaching wins. “I feel like we’re kind of in the same position now. It’s time to get challenged like this and see where we’re at. We’re going up against one of the better and steadier 4A programs around.

“Our district, to this point, has been about as impressive as any around so far. So we’ll start to see some separation through October. And for us to be a part of the (frontrunner) conversation, we have some work to do starting (tonight).”

The Dodgers scored one of the more memorable triumphs in school history a year ago in Pleasant Hill, staging a furious comeback in the final 10 minutes of regulation to erase a 21-3 deficit and shock Southeast Polk with a touchdown on the last play of the game, 22-21. That only seemed to fuel the Rams, as head coach Brad Zelenovich’s team turned a 1-4 start into five consecutive wins and a trip to the UNI-Dome for the state semifinals following the stunning Homecoming setback against FDSH.

“They’re maybe not quite as stacked along the lines as (the 2018 group), but they’re still tough in the trenches and they have some very talented skill kids,” Miller said. “They’ve found a good balance between running (senior Deveyon Montgomery and sophomore Titus Christiansen have combined to rush for 425 yards and six touchdowns) and passing (sophomore Jaxon Dailey has thrown for 703 yards and six scores while not being intercepted once in 91 attempts) against a very tough schedule.

Fort Dodge is 4-0 for just the fifth time since 1946, joining the 1978, 1984, 2005 and 2015 Dodgers. Miller still sees plenty of room for improvement, which needs to start now with the schedule’s degree of difficulty increasing significantly.

“We have to be more consistent and disciplined; we’ve gotten away with some stuff so far that our district opponents will really take advantage of,” Miller said. “I don’t want to say things have been easy for us so far, and that’s not just because of who we’ve played. We’ve had stretches where we’ll flash our potential and look really good.

“There’s no hiding it: this is a showcase game. We have the potential to see a few more before all is said and done, but it’s still just potential. We have to make some things happen and take advantage of our opportunities. We were able to do that down there (last season, in defeating the Rams for the first time since 1996). It’s a good time to see where we’re at and what we need to do moving forward.”

FDSH senior quarterback Asle Thorson has passed for 803 yards and 10 TDs. Senior Tysen Kershaw has 20 catches for 303 yards and five scores, and junior tailback Dayson Clayton has rushed for 402 yards and four touchdowns so far.

Senior linebackers Austin Lee and Tyler Nichols are the Dodgers’ leading tacklers, while senior Brycen Bell and junior Sam Daniel both have a pair of interceptions.

SEP’s Fred Johnson — a 6-foot-2 senior target — has 14 receptions for 278 yards and four TDs. Senior Carter Olesen is the Rams’ top tackler, and senior Carter Knight has a pair of interceptions.

Fort Dodge is again offering its “Spirit Walk” at 5:30 p.m. Friday, sponsored by the Dodger Gridiron Club. Food and activities will be offered just south of Dodger Stadium, with burgers by Ja-Mar, a bouncy house, music and activities for kids.

Temperatures are predicted to be in the low-60s by kickoff, with the morning rain having cleared out of the area well before game time.