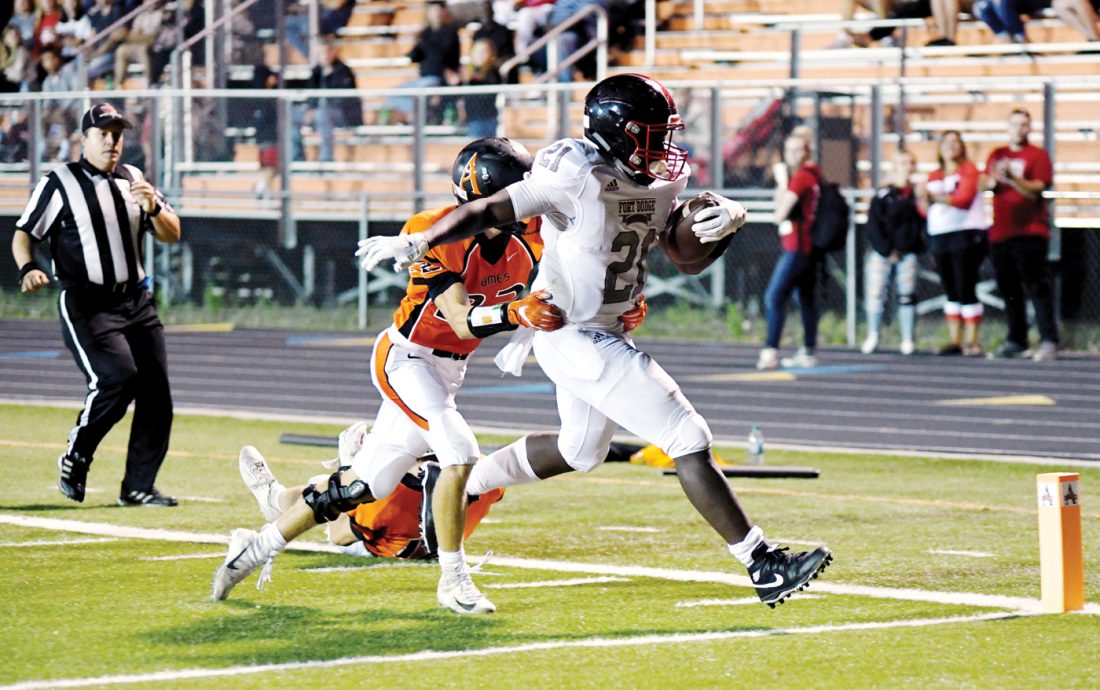 AMES — To this group of Fort Dodge football players, Friday’s 42-7 victory over Ames was just another step in the right direction for the here and now.

Veteran coach Matt Miller, who has now been with the Dodger program for over 30 years, tried his best to provide a proper perspective both on his team’s dominance last night and the recent shift in the series — which has been nothing short of seismic.

“To these kids, beating Ames may not seem like as big a big deal because we’ve been fortunate enough to do it now for four straight years,” Miller said. “When you’re 16, 17, 18 years old, you don’t think much beyond what’s right in front of you. But I was here for the playoff game in ’93. For Randy Reiners to Mark Wills (to clinch a playoff berth) in ’94. And for every one of the losses they hung on us after that (14 in a row from 1995 through 2008).

“Ames has a rich football history. They’re a perennial playoff contender. Beating them is no small feat. So to turn things around the way we have in recent years (Fort Dodge is 7-2 against the Little Cyclones since 2009) is huge. Someday, our guys will see that.”

The eighth-ranked (Class 4A) Dodgers made it look very easy and established a record of their own — again — in shoving Ames aside and improving to 2-0. The Little Cyclones (0-2) were quite simply overmatched in a contest that could’ve actually been uglier than the final 35-point margin — the largest Fort Dodge victory in the 66-game, 103-year history of the series.

Junior running back Dayson Clayton, who went virtually unused in last week’s 65-0 whitewash of Mason City as he continues to fight a balky back, rushed for 164 yards on just 18 carries and caught six passes for a team-best 80 yards. He scored three times in the third quarter alone, as Fort Dodge turned a somewhat-tenuous 14-0 halftime advantage into a blowout in a hurry.

Senior quarterback Asle Thorson, meanwhile, completed 22 of 28 passes for 243 yards and a pair of scores. Thorson shook off an interception and a fumble in Ames territory with an otherwise-sharp overall performance for the second consecutive week.

The Dodger defense, meanwhile, was relentless in virtually matching their harassing effort from a week ago against the Mohawks. Ames managed a paltry 228 yards on 70 plays from scrimmage, including just 47 on the ground.

Senior quarterback Cooper Downs, who threw for 340 yards in Fort Dodge last season, completed only 28 of 56 passes for 181 yards.

“I think the biggest thing we have going for us right now is that we’re playing true team football,” Miller said. “This is the ultimate team game, in that you’re only as good as how you perform together.

“Dayson ran the ball well even though he’s far from 100 percent right now and Asle did a nice job, but all of our guys are really stepping up and making things happen, top to bottom. Last week, our linebackers kind of made a statement. And I think (Friday), it was more about the defense as a whole and the way our offensive line worked as a unit. When you break it down by (position) between the offense and defense, I’ve been impressed by how much we’ve made it about ‘us’ and not the individual.”

The Dodgers were ahead by two touchdowns at the intermission despite having four empty trips into Ames territory. Instead of taking their glimmering hopes and rallying around it, the Little Cyclones were swallowed up in a hurry during a five-minute, three-touchdown flurry.

At that point, it was 35-0 and the continuous clock rule went into effect.

Ames did finally break the scoring ice — Fort Dodge hadn’t surrendered a single point through the first 88 minutes of game action in 2019 — with eight minutes remaining in regulation, but it was nothing more than a consolation prize at that point.

The program’s biggest triumph against Ames before Friday had been a 33-0 shutout in 1981. The Dodgers defeated the Little Cyclones a year ago, 52-24, and have now racked up 156 points in the last three meetings alone.

Fort Dodge is averaging 36.1 points per contest since 2009 versus AHS — a stretch in which it sports a 54-45 overall record.

“We have nothing but respect for Coach (Bruce) Vertanen and their program,” Miller said. “And Ames is in the beginning stages of a $34 million investment with the new high school, an indoor football facility, new multi-purpose gyms…it’s not like they’re on a downswing or on their way out as a (large-class) contender.

“I will never let our guys think that beating Ames — especially like this — is something we take for granted.”

The Dodgers face Indianola on Friday in their annual Homecoming game. The Indians have defeated FDSH three consecutive times by a touchdown or less dating back to 2016.