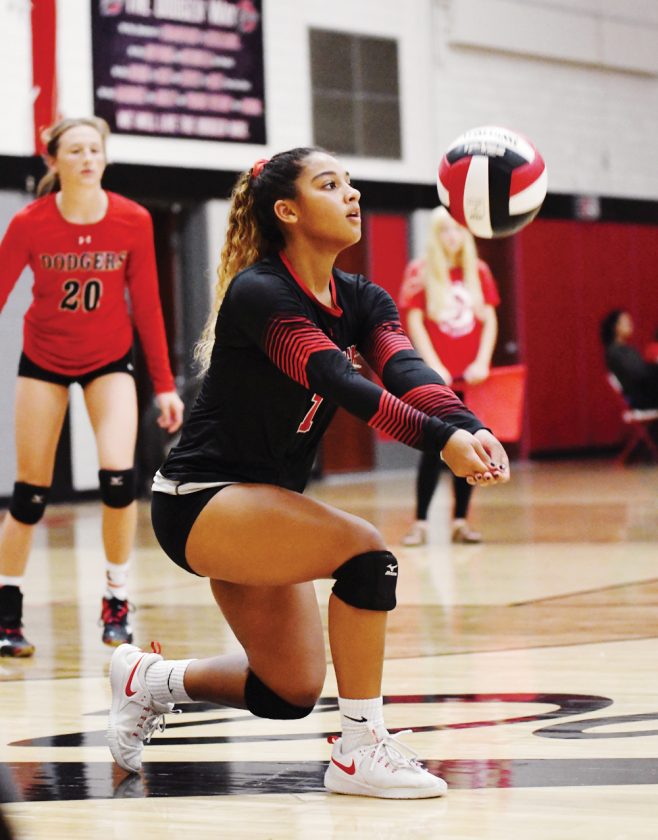 The annual Jackie Wilde Invitational gave the Fort Dodge volleyball team a chance to do two things on Saturday.

First, the Dodgers were able to compete at home — something they were doing for just the second time this season.

Second, they stepped away from the rigors of the ultra-competitive CIML schedule and saw how much they’ve truly improved as a squad.

The Dodgers took advantage of both and earned a runner-up finish to sixth-ranked (Class 4A) Council Bluffs Lewis Central in the Dodger gym.

“It’s just a nice reprieve to see some other programs from around the state and compete against teams closer to our size,” said FDSH head coach Toni Cochrane. “We competed well all day. It was nice to see since this is just our second time playing at home.”

Lewis Central took the championship match, 25-7 and 25-6, but Cochrane didn’t want her team to dwell on that loss at all.

“When we got down against Ridge View (in the semifinals) I told them to just start playing their way out of it,” said Cochrane. “We did just that. We talked about hitting shots that force them out of their system, and that happened.

“We just did a lot of things well that had we worked on all week and as a coach, you can’t ask for more than that.”

Fort Dodge, which already has 10 losses to ranked opponents, dropped the first game to Ridge View in the semifinals, 25-20, and fell behind the Raptors early in the second frame. But after a timeout to regroup, they prevailed 25-17 before a 15-8 victory in the deciding game.

“I got after them pretty good,” Cochrane said. “They started to play better, stayed positive and turned it around. It’s nice to get a medal in our own tournament.”

Fort Dodge, which faced six straight opponents ranked in Class 5A before this tournament, stands at 3-19 now on the year.

Kiana Touney delivered 31 kills in the tournament for the Dodgers, while Ciarra Love added 11 and Nicole Guerin 8.

“Our unforced errors were down and that was good to see,” added Toni Cochrane. “We have been working on that as well. “

Fort Dodge gets back on the road Tuesday, traveling to Marshalltown to face the Bobcats in a CIML Iowa Conference contest.