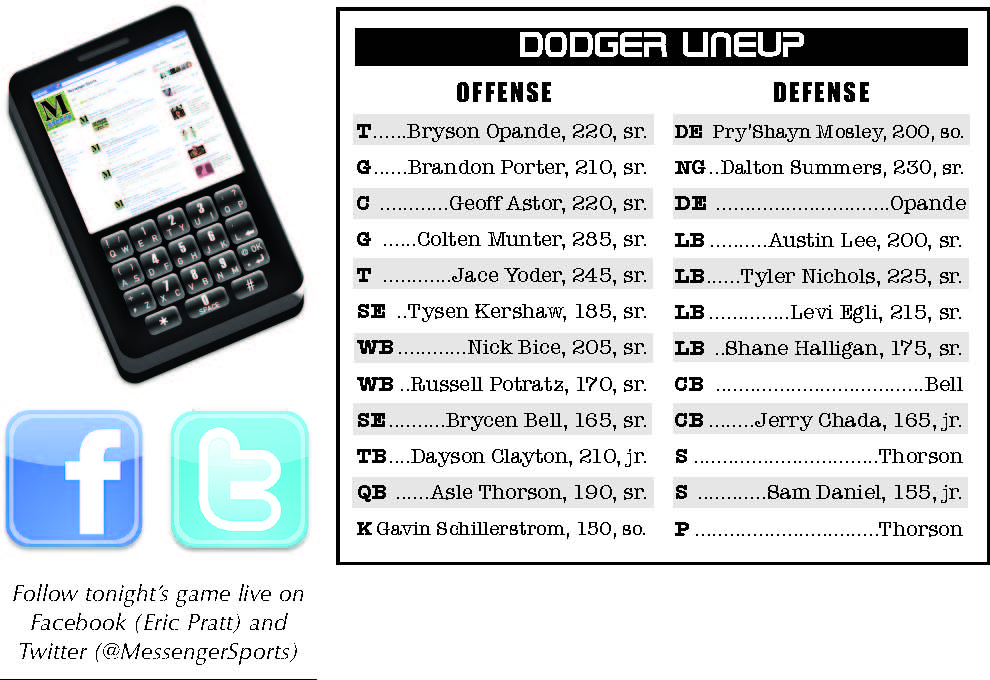 CARROLL — Sixth-ranked (Class 4A) Fort Dodge has shown both its style and substance in starting 3-0 for the first time since 2015.

Head coach Matt Miller believes the Dodgers will need plenty of both if they want to make their Carroll trip a successful one on Friday night.

Fort Dodge’s final non-district test is unique; the program will face the Tigers (1-2) on their home turf for the first time ever. The schools had their inaugural matchup a year ago, with the Dodgers scoring a 35-7 victory.

Varsity kickoff is scheduled for 7:30 p.m., following a freshman contest.

“We know we can be a good football team down the road, but we’re not there yet,” said Miller, who is now just two wins from tying Forrest Marquis as the school’s all-time leader for career victories. “If we’re fundamentally sound and keep away from avoidable physical and mental mistakes, we’ll get there. But we let some things slide (against the Indians) that will cost us eventually if we aren’t careful.

“This Carroll team can play, and we have a lot of respect for their program. You don’t experience the kind of success they’ve had (the Tigers are 99-42 since 2006, with 12 playoff appearances) and make the investment they did (the community opened a new $5.7 million football complex last fall) if you aren’t a competitive, football-oriented town.”

Carroll suffered a 34-21 setback against traditional 3A power Harlan last Friday. The Tigers dropped their opener against seventh-rated (3A) Glenwood, 44-28, but bounced back to defeat Ballard, 17-14.

“They have size and speed,” Miller said. “(Chase) Gladden (a 6-3, 255 lineman) is legitimate and gave us trouble last year. When you look at their defensive line especially, they could easily be mistaken for a 4A lineup. They’re big. But their back seven is aggressive and fast, too, and they have talent at the skill positions.

“This is an important game for us, given how well our district has played so far and how the playoffs are set up (through the RPI system).”

Last year, Carroll went 6-4 and reached the playoffs as the undefeated District 2 champion. The Tigers didn’t drop another regular-season decision after their loss inside Dodger Stadium.

Clayton, a junior who eclipsed the 2,000-yard career mark on the ground earlier this season, has rushed for 298 yards on 38 carries.

The Fort Dodge defense, meanwhile, has been iron clad. The Dodgers have given up just 508 total yards through the first three weeks and forced nine turnovers.

“Our defense is doing what we hoped it would: making things happen and flying to the ball,” Miller said. “Honestly, that’s where it all starts for the teams at the level we aspire to be.”

Fort Dodge’s 4A, District 2 opener next week is against No. 7 Southeast Polk. Second-ranked Ankeny Centennial, No. 9 Des Moines Roosevelt and Marshalltown are all still undefeated like the Dodgers.

“It’s going to get tougher and tougher,” Miller said. “So we have to keep moving forward and making sure we’re covering all of the bases, getting better with each week.”