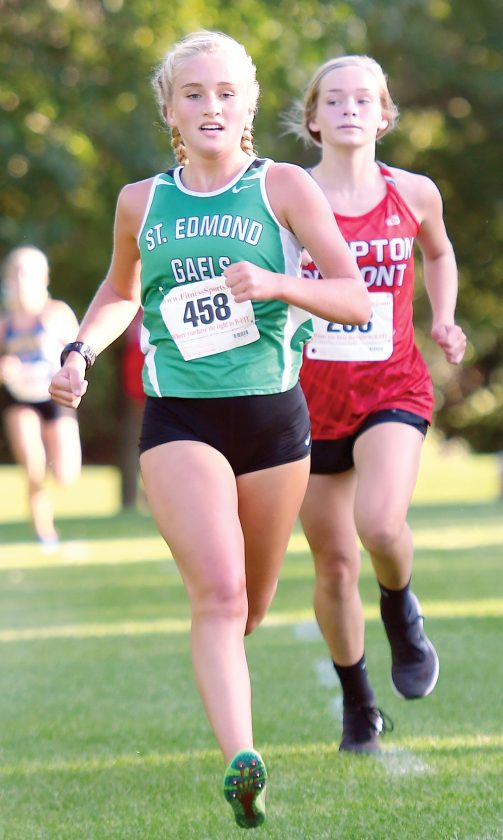 WEBSTER CITY — Cross country is one of the few sports that the Fort Dodge and St. Edmond athletic programs compete against one another.

The schools did just that here Tuesday evening at the Lynx Invitational.

The Gael girls finished third overall, the Dodger boys were third and the St. Edmond boys placed fifth in the team standings.

Jed Tracy from St. Edmond and Josh Meier of Fort Dodge battled step-for-step down the stretch, with Tracy taking sixth in 18:09.67. Meier was seventh in 18:09.98, while FDSH teammate Eric Crawford placed ninth in 18:14.

“I think it’s neat being able to compete against the Dodgers,” SEHS head coach Mike Szalat said. “Their boys have improved a great deal since last year. The kids from the two schools get along very well and support and cheer each other at these meets.”

“The boys were just thrilled, coming so close to second (place),” FDSH head coach Joe Jackson said. “They’ve really been pushing each other in practice and have their goals set for this season.

“Some of them went out a little too fast and kind of paid for it at the end of the race, but it’s a lesson learned. I’m very pleased with how things are coming together for them (in the early going).”

“I thought our kids, for the most part, improved from the first meet in terms of getting out more conservatively,” Szalat said. “Jed ran really a smart race. for example.”

“The girls did a great job overall,” Jackson said. “They’re getting there. We are kind of low on numbers and battling some injuries, but this is a good starting point and we’re seeing real progress.”

Next action for the Dodgers will be Thursday, Sept. 12, when they compete at the Marshalltown Invitational starting at 4:30 p.m. St. Edmond runs again on Saturday, Sept. 14, at the CYO meet hosted by Ridge View at the Holstein Golf Course beginning at 9 a.m.