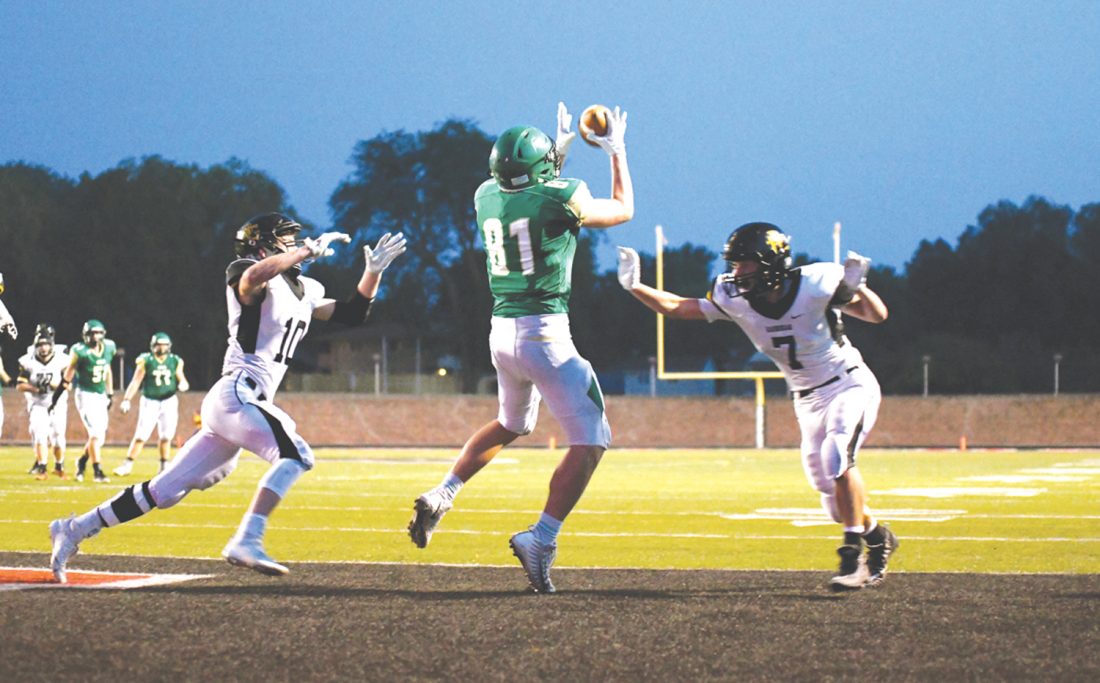 -Messenger photo by Britt Kudla Ethan Lursen of St. Edmond makes the catch for a touchdown against Bishop Garrigan on Friday inside Dodgers Stadium

Matt Dillon and Marty Wadle have been around high school football long enough to know when Friday night’s battle between St. Edmond and Bishop Garrigan was ultimately decided.

Marcus Plathe accounted for almost 200 yards of offense and four touchdowns, Cameron Baade caught two scores and Cade Winkel had a key interception late to lift the Golden Bears to a 28-15 victory over the Gaels here inside Dodger Stadium.

“We had a couple of big turnovers there in the fourth and were able to capitalize on them,” said Wadle, who is now 206-77 in 28 seasons at BGHS. “St. Edmond played hard and it was a very good game. Coach Dillon’s team did a lot of good things and I have a lot of respect for him and the program.”

Plathe had two of the key moments of the contest, finding Baade for the second time in the first half with just three seconds on the clock on a ball tipped in the end zone. He also used a perfectly-executed keeper run for a 56-yard score late in the third to put the Golden Bears (3-1 overall) back on top after St. Edmond (2-2) took a 15-14 lead.

“I learned a long time ago that when you have two very evenly matched teams, that in a game with 120-to-140 plays, it is going to come down to four-or-five plays,” Dillon said. “Unfortunately, those plays when in their favor and not ours.”

Drew Schaeffer threw for 102 yards including a 15-yard touchdown pass to Ethan Lursen, Sean Flattery ran for 74 yards and a score, and Kase Baker added 94 yards from scrimmage.

Schaeffer, a junior, led an 11-play, 72-yard scoring drive by completing 4 of 7 passes for 64 yards. He found Lursen, a senior, for a 15-yard strike and hit classmate Parker Oswald for the conversion to tie it at 8-all.

After an exchange of punts, the Golden Bears quickly marched 40 yards in four plays, as St. Edmond just missed picking off passes three times. The third resulted in Baade coming up with his second score of the night.

“It’s tough, because the kids battled and battled hard,” Dillon said. “You’ve just got to come up with a big play in situations like that when you need it. That score right before half and the midline option keeper that resulted in a (Plathe) touchdown, those were crushers.”

Winkel, a senior, ended any hopes of a second late Gael rally at home when he picked off a pass and nearly took it back to the end zone. He was stopped at the one after carrying several SEHS players with him, as Plathe punched it in on the next play.

“I saw Nick Lawler out of the corner of my eye and I knew he was going to nail me if I didn’t kick into second gear and I ended up avoiding him and running through someone,” Winkel said. “I was so close to that touchdown. In the end, it doesn’t matter because we got the win, but the touchdown would have been a nice feather in my cap.

“It feels great to get the win over a long-time rival in St. Edmond. Both teams kept it clean and understood that in the end, it’s just a game and we’re both trying to compete and win. They have really improved (since last year) and will have a great season .”

Both Winkel and Alex Mammen recorded a sack for the Golden Bears on defense, with Joey Trainer picking off a pass and Joe Merron recovering a fumble.

“Winkel and Mammen are two of the best linebackers in Class A football in the state of Iowa,” Dillon said. “I knew we would struggle to run the football if we didn’t get a hat on them. And anytime that happened, they were in on the tackle.”

Jackson Bemrich blocked a punt for St. Edmond, who will begin district play next Friday in Manning vs. IKM-Manning.

Bishop Garrigan meets another rival in top-ranked West Hancock in Algona. The Golden Bears have now won five in a row over the Gaels and hold a 40-19 advantage all-time in the series.