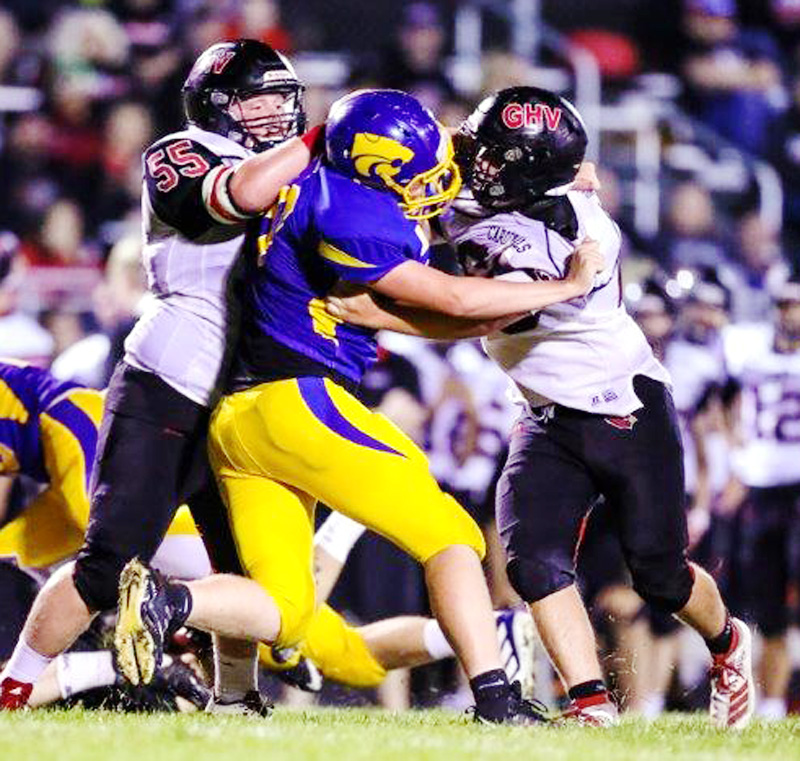 Photo by Rick Thompson Humboldt will try to earn its first win of the season on Friday night at home against Storm Lake.

With district play two weeks away, prep football squads will be trying to polish up their resumes as the year continues to progress on Friday.

This week’s area matchup of the week is Emmetsburg (1-1) at third-ranked Algona (2-0). The Bulldogs should have the upper-hand after two offensive explosions to start the week, while the E-Hawks look to bounce back from a loss versus No. 1 West Hancock.

Another key area contest will be between Pocahontas Area (1-1) and Manson Northwest Webster (1-1). Both teams won their openers, but couldn’t things going last Friday in a 18-7 loss to Southeast Valley and a 31-0 defeat to Panorama, respectively.

Humboldt (0-2) will try to break into the win column against Storm Lake (2-0), which has won by 35 and 15 points, respectively, in their first two outings.

Webster City (2-0) tries for its third straight win as it travels to Waterloo East (0-2).

Algona has been as fluid and efficient as any program in the state so far offensively. Sophomore quarterback Tyler Manske is completing passes at a 66 percent rate (18-for-27) for 419 yards and five touchdowns.

Senior Wyatt Wegener has caught nine balls for 222 yards and two touchdowns. Wegener is also one of the main cogs in the backfield as well, carrying 13 times for 300 yards and six scores.

Senior Sammonte Bawden has 17 totes for 164 yards and two touchdowns and classmate Garrett Schmidt has 15 carries for 134 and a TD.

The E-Hawks, who were ranked in the first AP prep poll of the year, will have their hands full as the Bulldog defense has only gave up 54 yards on the ground.

Senior Mason Griffin and junior Cole Shirk have been the main threats on the ground, carrying the ball 41 and 32 times, respectively, for 155 and 80 yards. Junior Ben Dunlap has thrown for 149 yards and two touchdowns.

Both squads started the season with victories before hitting rough sledding last week.

Last season, the Indians defeated the Cougars. Manson Northwest Webster picked up victories over the Indians in 2012 and ’13.

First-year senior quarterback Austin Anliker has thrown for 189 yards and a TD for the Cougars. Anliker is 26-for-46 passing. Junior Brayden Johll has rushed for 84 yards.

On the defensive side of the ball, John Schutller has 11 tackles, while Anliker and Brody Anderson have 9.5 each. Senior Kadin Birkey has two interceptions.

For the Indians, junior quarterback Trey Oehlertz is 22-for-41 throwing for 381 yards and two TDs. Junior Luke Crosgrove has caught seven balls for 106 yards.

On the ground, senior Cage Arends has 32 carries for 145 yards and a score.

Crosgrove and senior Thomas Melohn have 16.5 tackles, while junior Dane Johnson has 14.

Southeast Valley has been led by the senior duo of Hunter Kruse and Chase Swieter through the air, while sophomore Lathe Muench has been the groundhog.

Kruse is 12-for-25 passing for 207 yards and two scores, hooking up with Swieter on six catches for two scores and 145 yards.

Swieter, Graves and junior Parker Garcia have interceptions, Swieter returned his for a score. Sophomore Kolson Kruse has a fumble recovery.

Senior Jaace Weidemann is the third-leading rusher in Class A with 436 yards on 45 carries and seven TDs.

Humboldt has put up solid offensive numbers in its first two contests. Senior quarterback Jacob Thurm has thrown for 254 yards and three scores, while senior Jamison Heinz has carried the ball 40 times for 237 yards and two touchdowns.

Matt Miller is the defensive leader with 16 tackles, while classmate Carter Krichau has 15.

The Tornadoes have rushed for 691 yards in their first two contests. Senior Colton Dreith has 25 runs for 196 yards and a touchdown. Classmate Kole Wiegert has 37 totes for 195 and two scores, while junior Ben Ravleing has 24 for 165 and three scores.

Through the air, sophomore quarterback David Soto is 12-for-19 for 181 and two TDs.

It’s no secret that Webster City is going to run the ball. The Lynx have 101 carries on the ground and have only thrown eight passes.

Junior Trey Mathis has 46 totes for 236 yards and six scores. Senior Garrett Whitmore has 29 runs for 229 yards and one TD.

Mathis is also the leading tackler for the Lynx with 16, with two going for loss. Junior Jack Van Diest has 14.5 stops.

Junior Tyler Olson has three picks and a fumble recovery, while senior Malachi Montes has an interception for a 60-yard touchdown.

Waterloo East has struggled in their first two outings, scoring only three touchdowns total. Senior Dylan Reyes is 40 of 61 passing for 396 yards and a touchdown strike to sophomore Trevion Labeaux.

Sophomore Kjuan Owens has 23 runs for 130 yards and a touchdown.

In its first two contests, Lake Mills has won by an average of 21.5 points. The Golden Bears are coming off their first victory after toppling Mason City Newman 20-13.

Lake Mills has been dominant on the ground, rushing for 540 yards and 10 touchdowns. Junior Casey Hanson has toted the ball 29 times for 182 yards and three TDs. Senior Logan Prescott and junior Carson Eaton also have three scores.

Senior quarterback Mason Fritz has thrown for 135 yards and a touchdown.