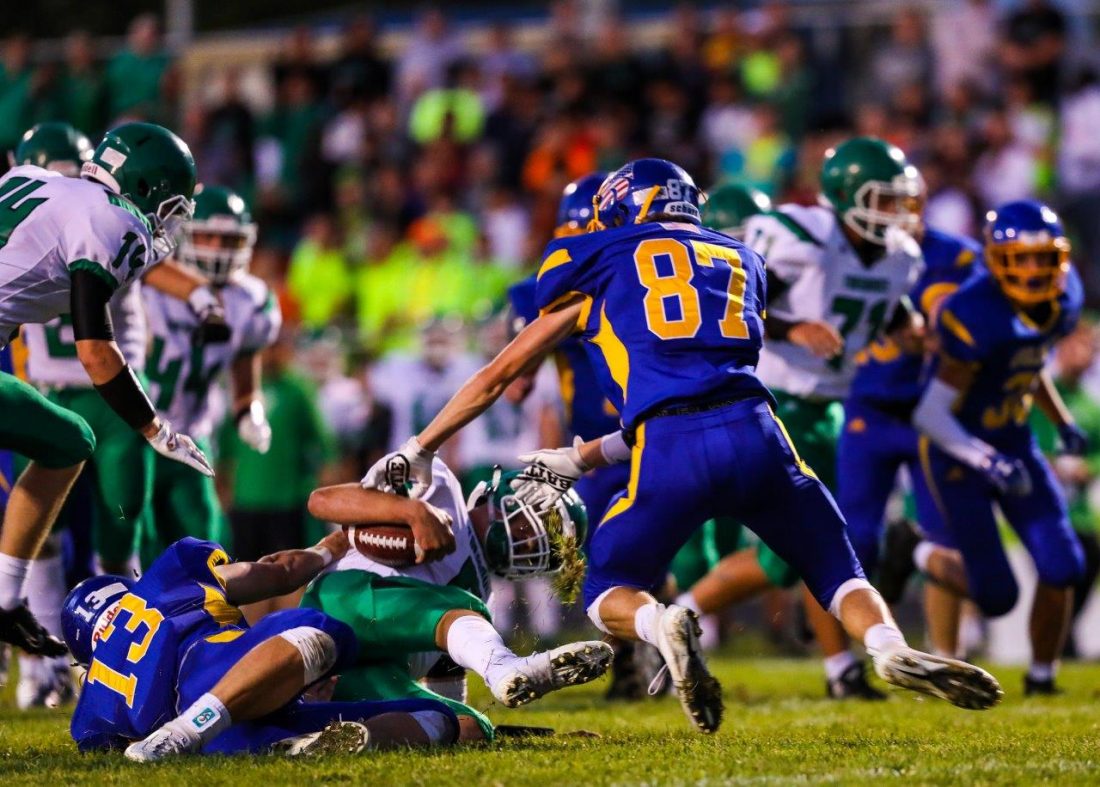 WATERLOO — The one-two punch of Trey Mathis and Garrett Whitmore did it again for Webster City.

Mathis and Whitmore combined to score seven touchdowns in the Lynx (3-0 overall) 48-32 win over Waterloo East (0-3), who have lost 18 straight games.

Mathis ran the ball 25 times for 183 yards and four touchdowns. Mathis had two five-yard scampers to go along with a 32- and 31-yard scores.

Whitmore finished the night with two rushing touchdowns and a receiving score. He had jaunts of 54 and 35, and caught a 29-yard scoring strike from Gabe Humphrey. Whitmore had 15 carries for 130 yards as the Lynx ran for 338 yards.

Tyler Olson had two interceptions, bringing his season total to five. Malachi Montes had an interception as well.

GOWRIE — Southeast Valley picked up its third win of the season with a 34-18 victory over Belmond-Klemme on Friday night.

Sophomore Lathe Muench had 18 carries for 165 yards and three touchdown runs. He scored from 40, 20 and nine yards out.

Senior quarterback Hunter Kruse was 6-for-13 passing for 138 yards and two touchdowns. He connected with sophomore Kolson Kruse for 11 yards and senior Carter Lane for 17.

Kruse and Lane had 77 and 58 yards receiving respectively.

The Bulldogs’ Bennett Eaton returned a kickoff 98 yards in the first quarter.

Derrick Kirsch added two one yard touchdown runs in the first quarter to give the Golden Bears a 14-6 lead.

Bishop Garrigan’s Marcus Plathe plunged into the end zone from four yards for a 22-6 halftime lead that stood for the final score.

Plathe was 8-for-11 passing for 127 yards and the rushing touchdown.

Kellen Murphy led the Golden Bears’ ground game with 27 carries for 125 yards. Cameron Baade had two grabs for 83 yards, including a 63-yard catch.

NEWELL — The Newell-Fonda defense provided a shutout and had six interceptions as the Mustangs defeated Siouxland Christian 56-0.

Trey Jungers, who had four touchdowns in Week 1, had four interceptions for the Mustangs (2-1 overall).

Hunter Christiansen had three touchdowns, running scores in from seven and three and returning a punt 50 yards to pay dirt. He finished the night with 16 carries for 93 yards.

Sievers hooked up with Treyton Mahler on touchdown strikes of 14 and 24.

Will Pitstick and and Wyatt Kreft had scoring runs.

Cole Runneberg had a 13-yard rushing touchdown and Mike Vonnahme returned an interception for a score.

Cooper Christians kicked a 31-yard field goal for the Indians.

Brayden Johll led the Cougars on the ground, rushing 32 times for 118 yards.

Kadin Birkey had three interceptions for the Cougar defense.

Another big night for No. 3 Algona

Tyler Manske was 9-for-12 passing for 129 yards and a touchdown, adding a rushing score for the Bulldogs (3-0 overall).

Sammonte Bawden ran for 81 yards and Wyatt Wegener added 79 yards rushing and a touchdown to his night.

Garrett Schmidt had 53 yards on the ground and a score, with Elliot Berkland hauling in the Manske TD pass. He finished with four receptions for 68 yards.

On defense, Cole Lewis had two sacks for Algona, with both Noah Kleier and James Wartick recording one each.

Ben Dunlap had a passing TD and 70 yards to lead the E-Hawks.

LAKE CITY — The sixth-ranked (Class 1A) South Central Calhoun football team scored 28 points in the first half on their way to a 31-0 victory over IKM-Manning here Friday night.

Cole Corey, who had one of those rushing scores and 42 yards, was 9-for-15 passing for 115 yards and another touchdown. Daniel Stevens hauled in the score.