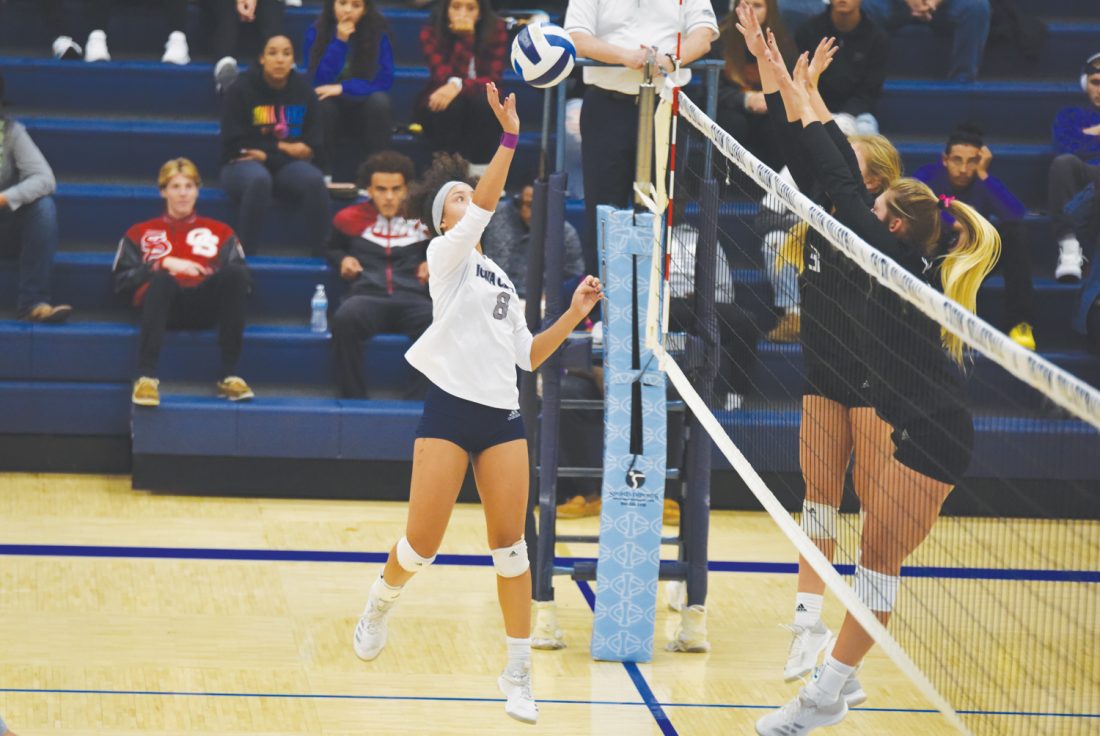 The Iowa Central volleyball team doesn’t have the experience they had a year ago, but the Tritons have just as much potential.

The Tritons are a year removed from graduating a dozen sophomores, including first team All-American Abby Lohrmann.

There are some holes to fill, but Iowa Central head coach Sara Horn is excited to showcase her new group.

“We see a lot of potential,” said Horn who is 159-93 in six seasons as the Triton head coach. “We’re ranked 18th in the preseason, right around where we expected to be. We have a lot of size this year and two solid outside hitters that can control the ball and put it away.

“We play a lot of ranked teams and have a tough league (ICCAC) schedule, so we will be challenged again.”

The Tritons completed an unbeaten league campaign in 2018, going 9-0 and claiming the school’s first ICCAC crown since 2012.

After beating Kirkwood in the regular season, the Tritons were stopped one game short of their second consecutive national tournament berth by the Eagles.

The past two seasons, the Tritons have compiled a 60-21 mark and gone 15-2 in the league, with a national tournament berth and two first team All-Americans.

Horn has two starters returning and a total of 12 players back from that team.

Sophomores Amaya Finley (outside hitter) and Taylor Bienemann (defensive specialist) are two key components back for the Tritons.

“Amaya is a great player to get back,” Horn said. “She was our kills leader and has a ton of experience. She is a vocal leader and was voted a team captain. Her defense has picked up and she’s been running down the ball.

“Taylor is a good athlete and comes up with some crazy touches on the ball. She has a nice work ethic. She was also voted team captain. She has done some really good things. She is a fiery player and very energetic on the court.”

The Tritons may have lost a lot of experience, but Horn believes this group has some depth.

“We do have some good depth on our roster,” Horn said. “This may be the deepest team that we’ve had since I have been here.”

Adding to the rotation will be Hannah Huss. The 2018 St. Edmond graduate played one season for Kirkwood before transferring to Iowa Central.

“Hannah and Taylor will be rotating and splitting time at DS,” Horn said. “Hannah is a solid ball handler. She’s a coach’s kid and has great volleyball IQ.”

Sophomores Abbie Stewart and Delaney Spinks will be key players in the middle. Freshman Kealey Anderson, a outside hitter from Shenandoah will also play a big part for the Tritons.

“Abbie is really standing out for us,” Horn said. “She puts up a really big block. Delaney is coming off a torn ACL and has been building her strength. She has shown us what she can do on the court.

“Kealey has looked really good and will be a solid outside hitter, playing in all six rotations like Amaya.”

Along with Huss, Iowa Central has six area players on the roster.

Huss’ former teammate Devyn Scott, will be an outside hitter. Algona graduate Baylyn Johnson will be a defensive specialist.

“Devyn will be a utility front row player,” Horn said. “She is such a hard worker and is moving to the outside from the middle.

“Baylyn has a ton of potential. She is a natural athlete that runs down a ton of balls. She will be a solid player once she catches up to the speed of the college game.”

Fort Dodge graduates and teammates Brooklyn Rowden and Kacee Gollob and Humboldt graduate Ashlyn Clark will also be on the squad.

“Brooklyn played a lot of volleyball. She knows the game really well and has great work ethic,” Horn said. “Kacee puts up a massive block. She is intimidating and has a ton of potential.

“Ashlyn, is still finishing up treatment (for Stage 4 Hodgkins Lymphoma) and will redshirt this season. We are excited to have her on our team.”

“Hawkeye, Southeastern and NIACC are going to make a solid run as well.”