Dodgers bounce back to finish the season in style 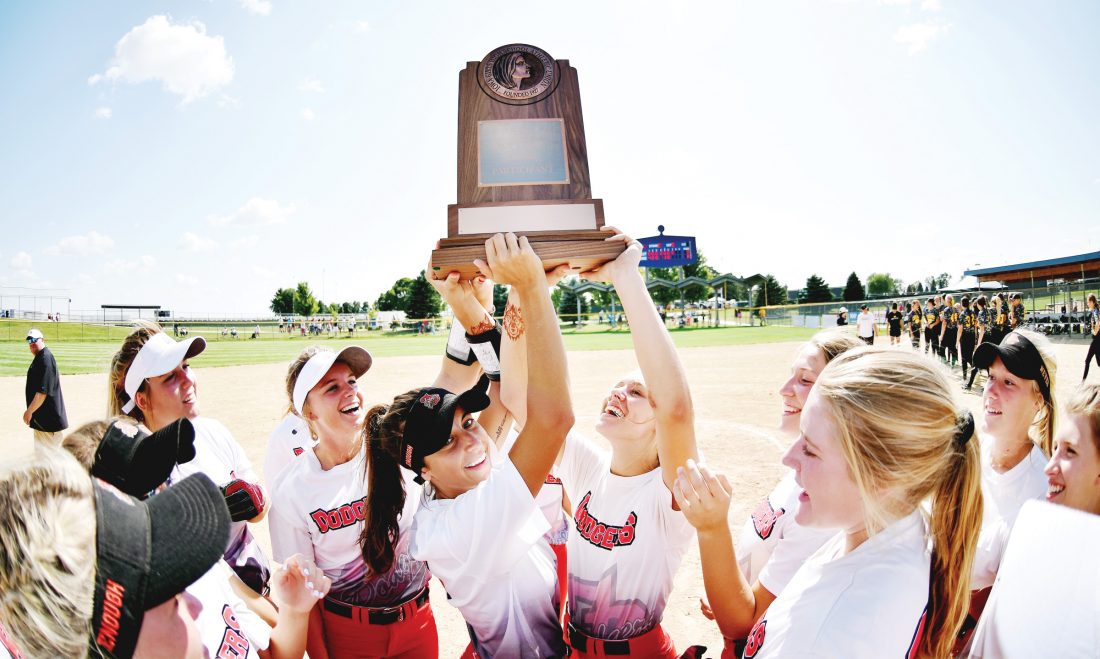 The Fort Dodge softball team didn’t want to be playing on Wednesday afternoon, but the Dodgers also didn’t want to let one loss define what had been one of the program’s most successful seasons to date.

The second-ranked Dodgers were still reeling less than 20 hours after a heartbreaking loss to seventh-ranked Valley the night before, but with a new challenge in front of them, they put an end to the frustration with an 8-0 Class 5A consolation rout of third-seeded Cedar Rapids Kennedy.

“We got punched in the mouth (against Valley in a 3-0 quarterfinal setback), and we could still taste blood,” said FDSH head coach Andi Adams. “We could have easily been crying on our field with a loss to Ankeny and not be here, but this group has just kept fighting all year long. There are no easy teams to play in Class 5A. They are all powerful and capable. We just had to prepare that way and know we had a job to do.

“There was a lot of reflecting to do.”

Fort Dodge (35-7 overall) made it clear early against third-ranked Cedar Rapids Kennedy (37-4) that they weren’t going to roll over. The Dodgers used their speed and base running skills for four runs in the opening frame and tacked on four more for an 8-0 victory.

The Dodgers, who were making their 15th state trip overall and fourth in the last five seasons, don’t like playing on the consolation side, but they don’t throw in the hat either. In the Dodgers’ 10 state trips under head coach Andi Adams, they have finished with victories on seven occasions.

The Dodgers’ starting lineup, which includes just three upperclassmen, became close friends and lived the family mantra on the field. The finale was for the seniors — not because any of them wanted to be in this position, but because their younger teammates demanded they showed Daphne Alstott and Aubrey Davis the proper respect on the way out.

Alstott and Davis left a lasting impression on the program, and after their final game, reflecting on the relationships with their teammates helped to ease the pain.

Alstott, who finishes as the school’s all-time stolen base leader (133), went 2-for-3 with two runs and a steal. Alstott will follow in her sister Mackenzie’s footsteps and play softball at DMACC.

Davis had a hit and scored twice against the Cougars.

“I couldn’t sleep last night after the loss, so it is an amazing feeling to end with a win and get to play together with this group one last time,” Alstott said. “Coach (Adams) has impacted my life in so many ways. I’m glad she was hard on me, because it will help me be great in college and in the real world.”

Davis was proud of her time as a Dodger as well.

“It means a lot to end my career with a win,” Davis said. “This group has been like a family, and it’s one of the more special seasons I’ve had.”

Loghen Schnetzer and Katelyn Werning — a pitcher who was 1-0 with a save this season — will take on the senior leadership role next season. Schnetzer gave a preview of what’s to come on Wednesday, going 3-for-3 with three RBI against Kennedy. She had two long at bats, where she saw a number of pitches and showed patience at the plate.

“You could tell Loghen had a different swagger about her (against Kennedy),” Adams said. “She wants to help take the reins (next season) as a leader, and she understands what she has to do.”

Schnetzer, who set the single season home run record with 14 this season, now has 25 in her career.

“I didn’t play so hot (against Valley),” Schnetzer said. “It was hard to lose that game, but we didn’t want to end with another loss.”

Sophomore catcher Tristin Doster didn’t record a hit in the contest, but did drive in two runs and scored twice. She had two hits against the Tigers the night before.

“We wanted to do this for the seniors,” Doster said. “We didn’t want to end with a bad taste in our mouth, and it gives us a great opportunity for next year with a solid core coming back.”

Fort Dodge recorded four runs and four hits right out of the gates in the bottom of the first inning, taking the extra base in a fast-paced “Dodger” inning to break the Cougars’ spirits early.

The defense was stellar as well behind Jalen Adams (24-3), as Tory Bennett came up with two diving plays to wipe out potential Kennedy base hits.

“It was tough having to come out like this, but we didn’t want to see the seniors lose in their last game,” Bennett said. “It will be hard to replace Daphne and Aubrey, but Loghen and Katelyn will help step into that role.”

Adams, a freshman, picked up her second win at the state tournament dating back to last season, firing her third shutout this postseason. She fanned five batters and allowed only one Cougar hit.

“Jalen pitched well, and our schedule prepared her well for situations like this,” Andi Adams said. We had to fight back, because we hated what happened to us against Valley.”

Adams is now 43-8 in her career in the circle. She picked up 19 wins in 24 appearances as an eighth grader.

“It feels good to end with a win, and I’m happy for our seniors,” Jalen said. “Tory, Haley (Wills) and the rest of us (freshmen) meshed with the sophomores, then the juniors and seniors, and we all just got along so well.”

With all of the time, sweat and effort that goes into putting together a top squad, Adams knows it takes a village to reach this point.

“We would have not been able to do it without the wonderful dads that help in the offseason and the overall community support,” Adams said. “They know where our heart is. Most towns don’t do what Fort Dodge does.

“Our seniors (Alstott and Davis) led this team in their own way. They were goofy and silly to keep things light, but played with an edge. This group was hungry. Now it’s time to take the next step.”