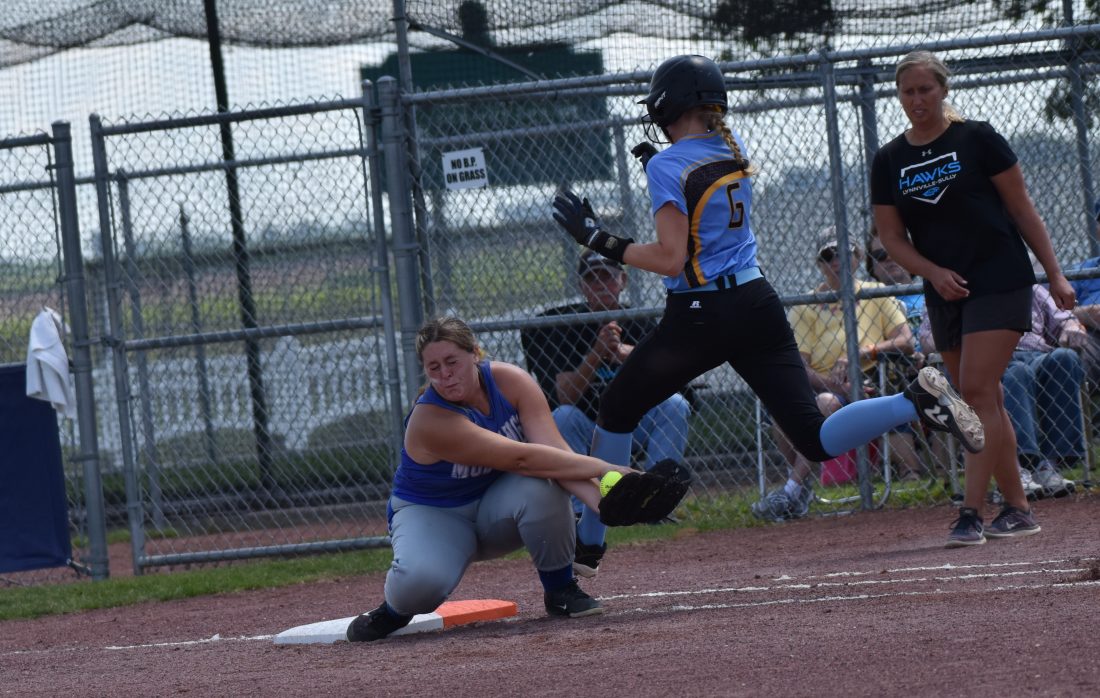 —Messenger photo by Britt Kudla Newell-Fonda’s Kylie Robinson holds on to the ball at first base to record the out against Lynnville-Sully in a Class 1A quarterfinal game at Rogers Park. For more photos, visit CU at messengernews.net

The Newell-Fonda softball team will get their chance at revenge against defending Class 1A state champion Collins-Maxwell.

Behind timely hitting and key defensive plays, the fourth-ranked Mustangs posted a 7-4 victory over No. 7 Lynnville-Sully here Monday in the quarterfinals at Rogers Park.

No. 1 Collins-Maxwell advanced with a 4-0 win over LeMars Gehlen.

All nine batters in the lineup for Newell-Fonda (38-5 overall) recorded at least one hit, with Olivia Larsen and Emma Stewart recording two each.

Kylie Robinson had a key two-RBI single in the fifth to back Ella Larsen, who struck out seven.

“I told the girls the goal was to get runs across early and put pressure on them,” N-F head coach Courtney Darrow said. “We executed well with our small-ball and made plays. I knew we’d have to make plays against Lynnville-Sully because they are a team that mirrors us.”

Darrow, a Fort Dodge Senior High graduate, returned to the state tournament as a head coach after playing in it for the Dodgers as Courtney Vaughn. She also coached here as an assistant with the Mustangs.

“It’s surreal,” Darrow said. “Playing here as a player, coaching as an assistant and now coaching here; that’s always been my dream and I couldn’t ask for a better group to do this journey with.”

Olivia Larsen, an all-stater who helped lead the Mustangs to the state basketball title this past winter, had a double, scored a run and stole one of Newell-Fonda’s three bases. She was in the lineup last year when they lost to Collins-Maxwell.

“It’s exciting and should be a fun game with two great teams,” Larsen said. “We both want it, but who doesn’t want to go to the championship game? This win gave us a lot of momentum and we are ready to go take care of business.”

Ella Larsen, who had a double and scored, improved to 20-2 on the year with the win inside the circle. After seeing University of Virginia recruit Mikayla Hogue for the first time last season, she is excited to get another shot.

“Now, we will be able to scout her,” Larsen said, “and see what their team does after seeing them for the first time last year.”

For the Hawks (26-9), Carson Fisk, Mallory Loftus and Korinne Jansen each had two hits, with Fisk and Loftus driving in two runs each. Denali Conover struck out five batters inside the circle.

After the Hawks stole four bases in the first two innings, Newell-Fonda’s Maggie Walker gunned down a runner in the third. Lynnville-Sully did not attempt another steal after that.

“I told Maggie to throw it from the knees,” Darrow said. “You have a cannon, throw them out. Once she did that, it gave her the confidence she needed.”