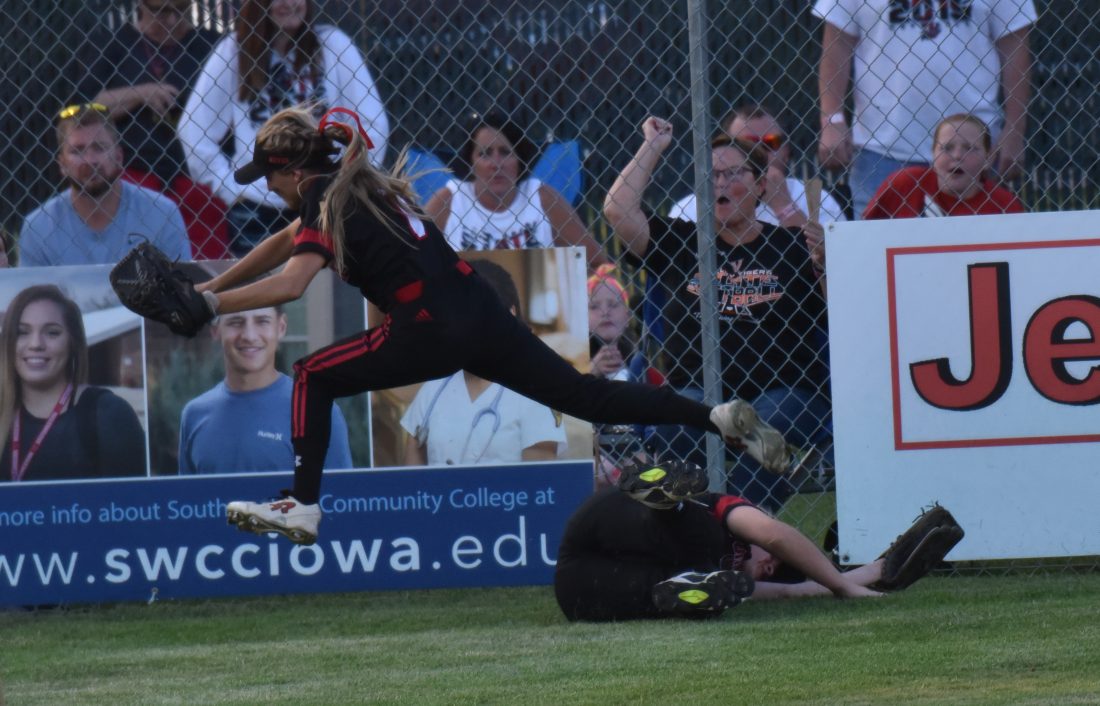 —Messenger photo by Britt Kudla Fort Dodge’s Sophia Klinger leaps (top photo) over Chloe Wertz to catch a fly ball against Valley during a Class 5A quarterfinal game at Rogers Park on Tuesday. Jalen Adams (bottom photo) puts down a sacrifice bunt against the Tigers. For more photos, visit CU at messengernews.net

All the stars seemed to be aligned for the Fort Dodge softball team heading into a Class 5A quarterfinal contest against West Des Moines Valley at Rogers Park.

The Dodgers brought the higher ranking, higher seed and a regular-season doubleheader sweep of the Tigers into Tuesday’s matchup. Hundreds of vocal fans donned in white, red and black filled the stands. Head coach Andi Adams’s staff had their players more physically and mentally prepared than ever before.

The veteran Tigers played the role of villain to perfection and turned the tables on Fort Dodge as the pressure intensified, scoring a 3-0 victory to spoil the festive mood on Kruger Seeds Field. Valley (30-10 overall) moved into the semifinal round as the surprising No. 7 seed, and will now take on sixth-seeded Iowa City High (35-7) — an upset winner themselves against Cedar Rapids Kennedy — for a berth in the 5A finals on Wednesday evening.

The Dodgers (34-7) and Cougars (37-3), meanwhile, will meet in the consolation round — rather than a highly-anticipated semifinal showdown — on Wednesday at Dodger Diamond. First pitch is set for 3 p.m.

Motivated by the rare opportunity to embrace an underdog role on a picture-perfect evening, the Tigers saw senior Haley Gatica fire a four-hit shutout as Fort Dodge was blanked for the first time all season. Valley plated a run in the third inning and added two more in the fourth, then put out the fire on a last-ditch Dodger comeback attempt with a bang-bang double play to end it in the seventh.

“I think we played with a little chip on our shoulder, yes,” Bakey admitted afterward. “Look, they took it to us the first time around (in 12-10 and 6-2 losses two weeks ago to the day). But we have a lot of very proud juniors and seniors (all but one Tiger starter is an upperclassman) who decided to take (those results) and our seed (Valley wasn’t ranked lower than second all season long until the last week) and do something about it to prove a point here (in the program’s seventh consecutive state appearance).

“We learned from our mistakes, made the plays in the field we didn’t the first time around (against the Dodgers), and knew that our margin for error was slim. If we didn’t show up like this, we were going to get our fannies kicked against an excellent Fort Dodge ballclub who has power and devastating speed (on the bases).”

Gatica, who surrendered 10 runs versus FDSH the first time around, hit her spots and leaned on her defense to take care of the rest. The anxious Dodgers went flat after a 2nd-and-3rd, one-out start in the first inning failed to produce a run, as Fort Dodge didn’t have a single baserunner reach second base again until the seventh.

“I really don’t know what to say right now, because I know how much our girls want it,” Adams said. “You just have to look at it, I guess, as paying your dues, so to speak. They have the upperclassmen who have been here before time and time again, and they showed it (last night).

“I wanted to convince myself that sweeping them helped us, but I know Coach Bakey and what he was saying to his kids once (the brackets) were announced: he told them they were being disrespected, counted out, and they were the underdog. How often can Valley — especially as a team with nine junior and senior starters who was ranked in the Top-2 for all but one week — get away with saying that? It’s hard, because I love my kids and I’m very proud of what they did to get to this point.”

The Tigers plated an unearned run to break the scoring ice in the third, and in the fourth, Maggie House delivered a clutch two-run single to make it 3-0. It stayed that way until the seventh, when Fort Dodge loaded the bases with just one out.

Chloe Wertz hit a comebacker to Gatica, who went home to try and get the force. Tristin Doster was ruled out on a close play at the plate, and VHS catcher Katie Newman then fired to third baseman Hannah Fry to get Aubrey Davis at third in another concurrent situation. Instead of staying alive, the Dodgers were suddenly done on a 1-2-5 double play.

“We felt really good about our chances after the emotions of beating Ankeny (in the regional final) and how well we’d played (against Valley) the first time around,” said Doster, who had two hits. “I made a bad mistake on a throw (which led to the first run). We had some (physical and mental errors) we don’t normally have, and I think we just panicked a little and were pressing even though we were right there in it.

“It’s frustrating to have to go through this, knowing how much we wanted it and what it took to get here.”

Bakey actually thought that may have worked against FDSH in certain ways.

“I’ve had groups and teams who have dealt with a ton of expectations. Sometimes, that can be a lot of weight to carry on your shoulders,” Bakey said. “Then when you have the whole town show up to support you like this … it can really make you play tense, especially given how young they are (the Dodgers start just two seniors and a junior).”

Freshman Jalen Adams (23-3) only surrendered two earned runs, but didn’t strike out a batter in her complete-game effort. Gatica (15-4) didn’t have any Ks either, but got the defensive plays she needed time and time again.

Now the Dodgers have less than 20 hours to regroup for Kennedy, which also suffered a disappointing setback on Tuesday.

“We have to bounce back for the seniors (Daphne Alstott and Davis),” Doster said. “We want to go out on a high note like we did last year (in a dramatic consolation victory), and show that we won’t let a tough loss like this define our season.

“This isn’t what we’d hoped for, but you don’t always get everything you want.”

Lea Grady was recently named one of eight National Athletes of the Week by the U.S. Track and Field and Cross ... 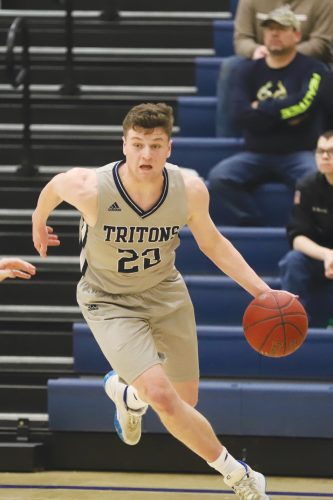 Newell-Fonda and Bishop Garrigan will set a course for Wells Fargo Arena in Des Moines next week, as both punched ... 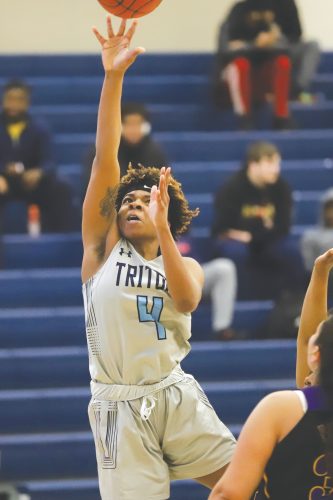