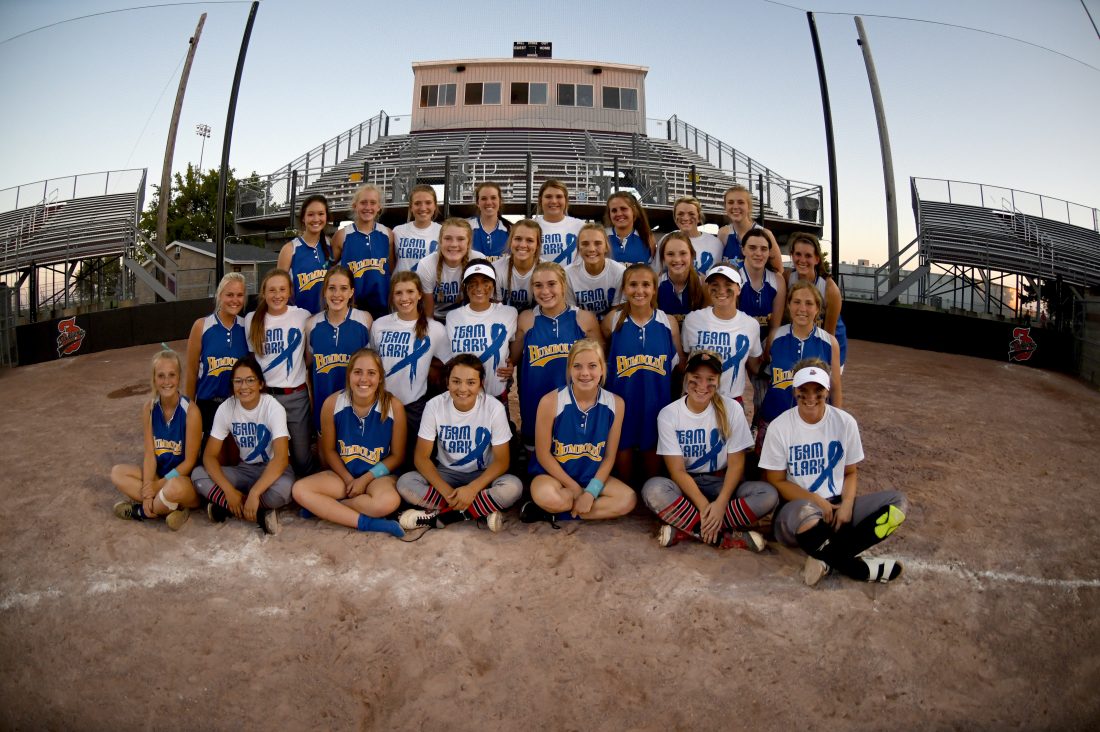 On a night when two softball communities came together for an off the field purpose, the two teams didn’t disappoint on the diamond.

Fourth-ranked Fort Dodge (9-2 overall) and second-ranked Humboldt (12-1) stood toe-to-toe on on the diamond for five innings before the Dodgers exploded for six runs in the sixth to earn a 6-1 victory.

The two schools, only 19 miles apart, showed their support for Humboldt’s Ashlyn Clark. The Wildcat junior, daughter of Humboldt’s Derrik and Kristi Clark, was diagnosed with Stage 4 Hodgkin’s lymphoma in early May.

Clark, who wasn’t in attendance on Friday night, as she was going through her second stage of chemo therapy, was still heavy on the minds of the Wildcats.

“The support that the team and Ashlyn has received has been overwhelming,” said Humboldt head coach Doug VanPelt. “We have been overwhelmed and flattered. It’s been very humbling to see the togetherness of both teams, and you seen that after the game as they came together for a picture at the end.

“Ashlyn was getting updates through out the game, so she wasn’t here in body, but she was with us in spirit.”

Both pitchers combined to allow only eight base runners in the first five innings, none of which made it past second base. Adams allowed five hits and Jacobson gave up seven.

“Both Ellie and Jalen are hard workers, Adams said. “When Jalen would be at the Softball Connection, Ellie would be there as well.

“Jalen out works me. She wants the ball, so she can prove that she can do it.”

Humboldt struck first in the scoring column in the sixth inning as sophomore Jori Hajek got a hold of of an Adams’ delivery, ripping the ball to center field, which caromed off the fence as she sped around the bases for an inside-the-park homerun.

“I’m glad we came down to play such a high caliber team,” VanPelt said. “We played well and we were right there with a very good team (through five innings).

“In the sixth inning, they dug in at the plate and made contact with the ball.”

Adams set the next two batters down and then led off the inning for the Dodgers. Adams went opposite field down the left field line for a single. Sophomore Tristin Doster reached on an error and senior Aubrey Davis had a single to load the bases with nobody out.

“We are a momentum team. We take pride in our offense, and we seem to come through when the pressure is on,” Adams said.

Junior Loghen Schnetzer ripped a deep ball to center for a sacrifice fly, scoring freshman courtesy runner Maia Davis. Freshman Haley Wills was then intentionally walked to bring up Chloe Wertz. The sophomore left fielder ripped an RBI single to score both Doster and Davis to give the Dodgers a 3-1 lead.

“I had a feeling Chloe would come through,” Adams said. “She is one of the most coachable kids and she always listens. She just always has a stoic look on her face when she has an opportunity to do something big.”

The Dodgers are back in action on Monday when they host Marshalltown at Rogers Park. First pitch of the doubleheader is set for 5 p.m. on Diamond 1.