Swinging Away: DeMers on first win for Miners 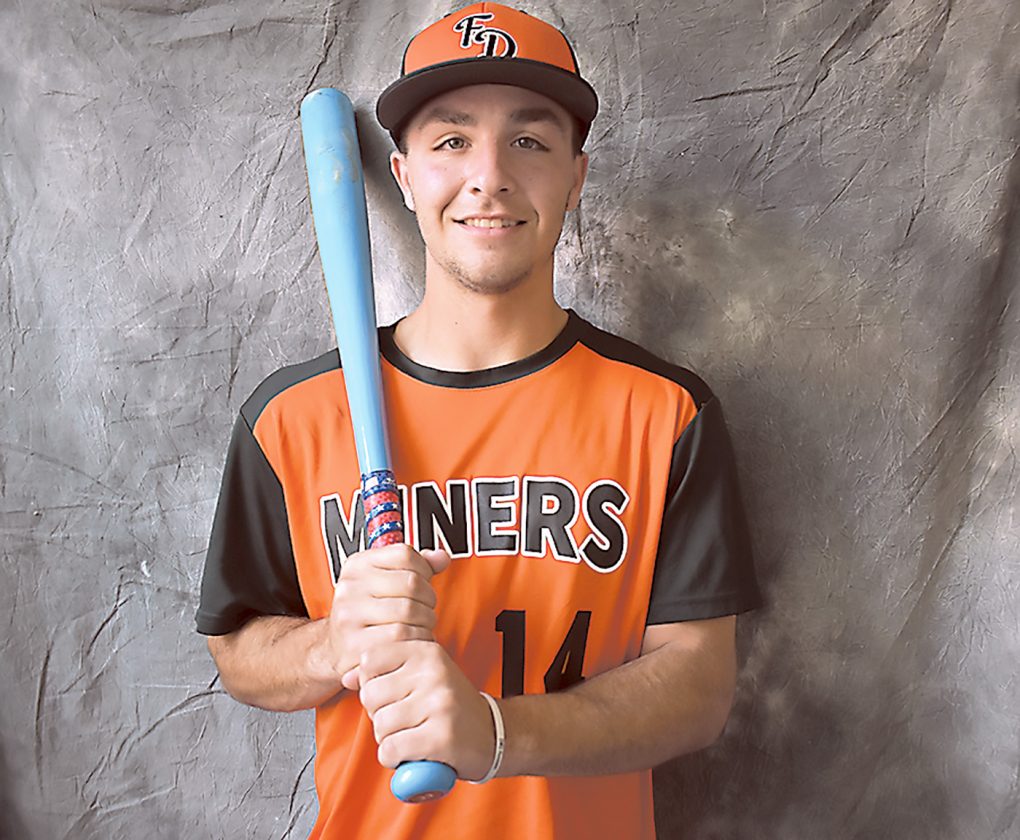 Messenger photo by Chad Thompson Drew DeMers, a college baseball player from South Dakota, poses at The Messenger. DeMers is playing for the newly-formed Fort Dodge Gypsum Miners this summer in the Pioneer Collegiate Baseball League. Their home will be Patterson Field.

Drew DeMers will be the first to tell you it wasn’t his most productive game Wednesday night at Storm Lake.

But it was a game where the Fort Dodge Gypsum Miners picked up their first win of the season. And DeMers said at the end of the day that’s what counts.

“We won and we hit really well,” DeMers said Wednesday night. “I didn’t do very good, but that doesn’t really matter as long as the team wins.”

The Miners took it to the Whitecaps, winning 17-2.

DeMers was happy to see his teammates have success.

“Both of the Australians (Sam Kimmorley and Jamie Young) hit a home run,” he recalled. “Our pitcher, Houston Hawkins, did really well tonight. He went five innings and only gave up one run.”

He finished the game 0 for 5 with a walk.

“I felt like my approach was on in that appearance (walk),” DeMers said.

DeMers fouled the first pitch straight back in that at-bat.

“I felt good about that first swing I had,” he said.

The next four pitches were balls.

Once on base, DeMers ultimately advanced to third base after the next two players also walked.

Peyton Krugler later hit a fly ball to deep left. After the ball was caught, DeMers tagged and scored easily on the play.

DeMers had three strikeouts on the day and a pop out to the catcher.

DeMers, a junior at Dakota Wesleyan University in Mitchell, South Dakota, said the team continues to strengthen its bond.

“We all joke around with each other quite a bit,” he said. “It’s looking really good so far.”

“Connor encourages us to hang out a lot and he keeps the mood in the dugout pretty light, so that helps us build chemistry,” he said.

While in Storm Lake, the players became aware of a game within the game that took place among the fans.

Krugler was designated as the “beer batter,” according to DeMers.

“So it’s a dollar off when he strikes out,” DeMers said.

Well, Krugler kept beer prices high most of the night, making contact in the first five of his six at-bats.

But on his final at-bat, Krugler punched out.

“He struck out his final at-bat and tipped his hat to the crowd,” DeMers said.

DeMers said it’s interesting to meet the other players and learn their backgrounds.

“It’s the same as any college team coming from different high schools,” he said. “I really enjoy the different cultures that everyone on the team has. Guys from Western Oklahoma, guys from Lake Land College. It’s interesting to see how similar their cultures are to mine being from South Dakota.”

DeMers added, “The fact that there is a baseball house that the Iowa Central guys have. It reminds me of Wesleyann because we had that there and so I think we will all get along.”

In between games, DeMers likes to catch up on some reading among other things.

He’s currently reading the book “The Stand” by Stephen King.

“I’ve been reading it off and on for periods of time,” he said. “I might read it for a week or two longer.”

This past Wednesday, Fort Dodge Gypsum Miner players helped repaint the outside of Twin Lakes Habitat for Humanity along North 12th Street.

The Miners will head to Albert Lea, Minnesota, Saturday night to play the Lakers.

Then on Sunday, the two teams will play again at Patterson Field.

*Editor’s note: This series follows the on and off the field experiences of Drew DeMers, a college baseball player. DeMers is playing the outfield for the Fort Dodge Gypsum Miners this summer at Patterson Field. He will also be volunteering in various ways throughout the city. DeMers is staying with staff writer Chad Thompson at his home in Fort Dodge.