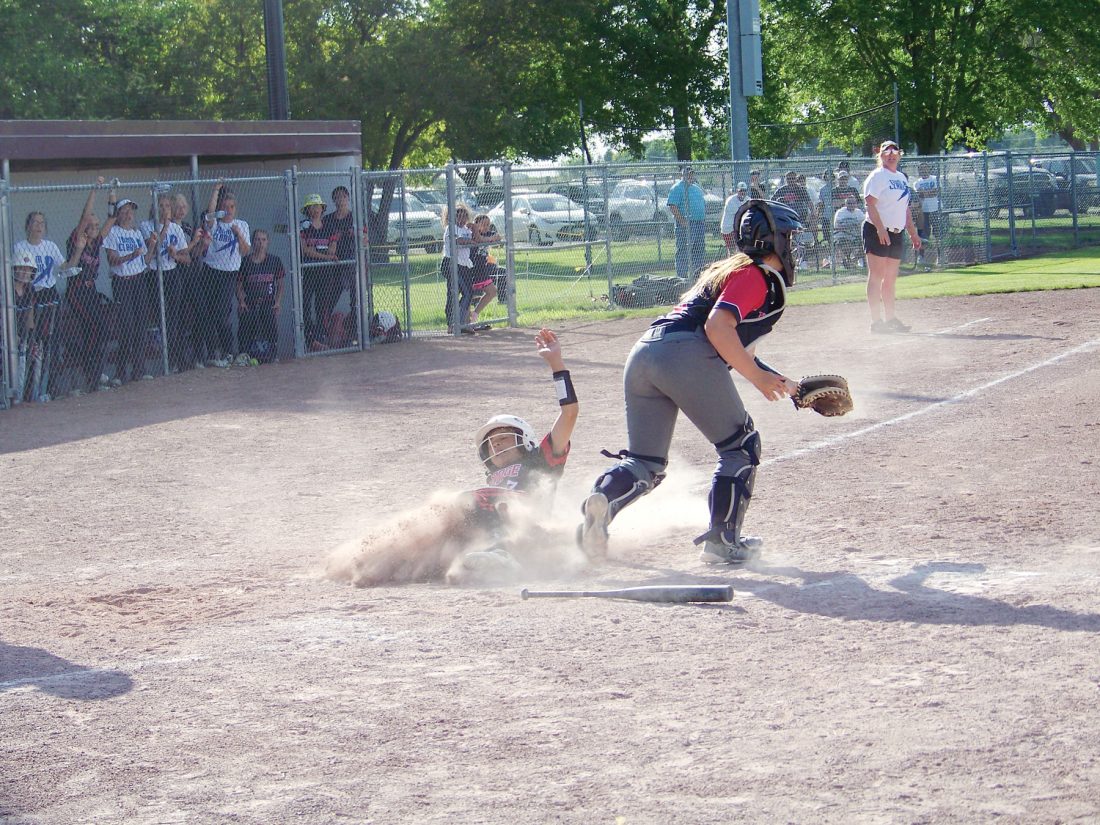 The Marshalltown community has been touched in so many ways by other Iowa towns during times of tragedy and struggle.

When Jim Palmer had a chance to return the favor on Monday, the Bobcat softball coach didn’t hesitate to support a stranger in need.

Palmer and his MHS program actively participated with fourth-ranked (Class 5A) Fort Dodge in “Ashlyn’s Night at the Ballpark” on Diamond 1 before a CIML Iowa Conference doubleheader, won by the Dodgers in identical 12-0 finals.

Ashlyn Clark, a recently-graduated senior softball player from Humboldt High School, was diagnosed with Stage 4 Hodgkin’s Lymphoma last month. Clark, the daughter of Derrik and Kristi Clark, has taken the field a few times this year in between cancer treatments.

St. Edmond junior Jocy Timmerman and all of the local coaches banded together to organize the event, which helped raise money for Clark’s family. Before Monday’s first pitch, the Dodgers and Gaels were joined by Marshalltown and Hampton-Dumont at home plate for a picture, with all of the athletes wearing “Team Clark” shirts.

As of yesterday afternoon, over 900 shirts had been sold.

“Jim didn’t even bat an eye. They’ve gone through so much over this past year with the tornado relief and recovery … he felt like it was their turn to give back to someone else who needs it,” FDSH head coach Andi Adams said. “They had people from all over Iowa rallying to help them, because that’s what this state does.

“This is a perfect reminder of how communities believe in each other unconditionally. It doesn’t even have to be your neighbor or someone you know. Jim gave $200 out of his own pocket. We’ve been friends for a long time, and the first thing he said to me is, ‘what can I do. What can we do.’ It was inspiring and meant so much to all of us.”

The Dodgers (11-2 overall, 2-2 CIML Iowa) didn’t let up once the ball got rolling, pounding out 23 hits in the twinbill sweep of the Bobcats (3-8, 0-4). Freshmen pitchers Jalen Adams and Haley Wills were virtually flawless, with Adams firing a no-hitter and Wills a perfect game in the pair of three-inning contests.

“I didn’t expect that to happen,” Adams said. “Marshalltown has really given us a run for our money in the past. They’re almost always competitive against us in at least one of the two (doubleheader) games. But we came out ready to go physically and mentally.

“We respect everyone and don’t take anything for granted. I’m very proud of this team and how sharp they were.”

Fort Dodge plated six runs in the first inning and six more in the third to end the opener early. Adams drove in three runs, while Loghen Schnetzer knocked in a pair. Seniors Aubrey Davis and Daphne Alstott finished with two hits each, and both scored twice. Tristin Doster had two hits as well.

Adams struck out four and walked one.

The nightcap was more of the same, as FDSH tallied six runs in the second and four in the third to seal the sweep. Doster tripled and drove in three. Bennett scored three times and chipped in two hits.

Wills was untouchable, striking out two and not allowing a single baserunner.

“Our defense did a great job and the offense adjusted to the pitching instead of just losing discipline and swinging for the fences,” Adams said. “We hit up and down the lineup, and Jalen and Haley were really on with their teammates backing them up.”

The Dodgers return to action on Wednesday at Southeast Polk.