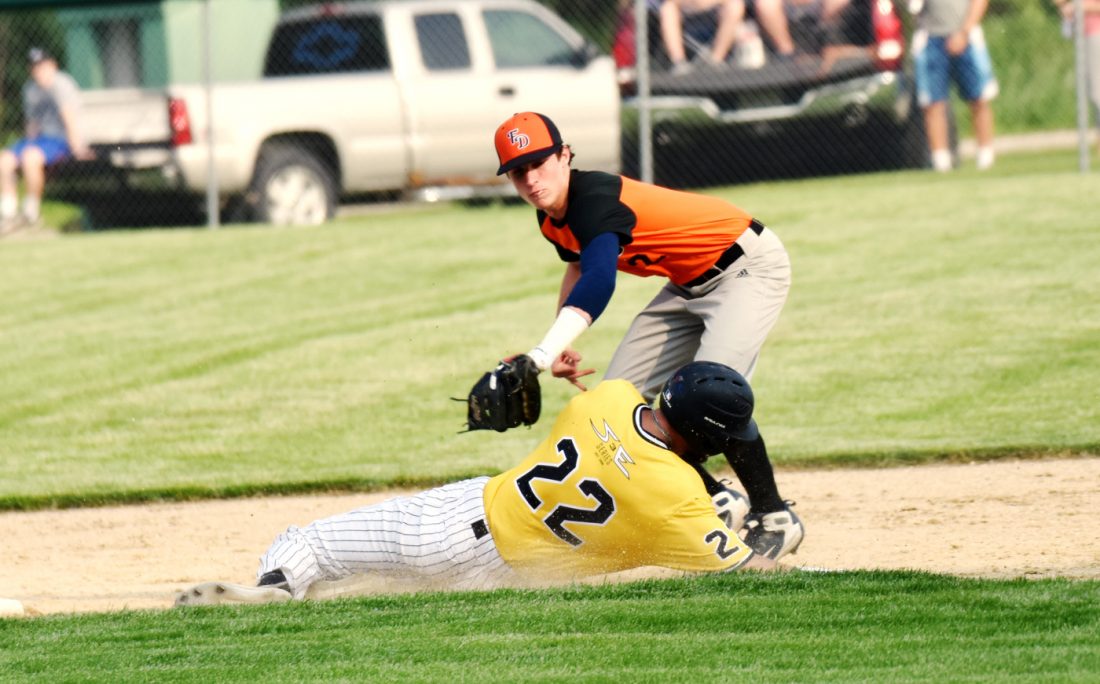 Messenger photo by Britt Kudla Derek Kay of the Fort Dodge Gypsum Miners makes a tag in a game at Patterson Field earlier this season.

Editor’s note: This series follows the on and off the field experiences of Drew DeMers, a college baseball player. DeMers is playing the outfield for the Fort Dodge Gypsum Miners this summer at Patterson Field. He will also be volunteering in various ways throughout the city. DeMers is staying with staff writer Chad Thompson at his home in Fort Dodge.

Facing two strikes and two outs in the fourth inning, DeMers made solid contact on a curveball, he said.

“That was pretty cool for me,” DeMers said. “It went into no man’s land and I was able to stretch out a double.”

It was the first of a two-game weekend series against the Lakers. The Miners split the series with a win on Sunday in front of a home crowd at Patterson Field.

The final score was 16-5 in favor of the Miners. DeMers played left field and batted eighth in both games.

Despite the team loss, DeMers enjoyed the trip to Albert Lea, Minn.

“It’s super clean,” he said. “They have a really cool main street. The field is really nice too. They have a big centerfield wall and pretty average sized field.

“The grass in the outfield was really even. It was a really nice night for baseball and quite a few people there, too.”

He said the bullpen setup was unique, with fans lying out on the grass with their blankets.

“The fans were almost sitting in the Albert Lea bullpen, which was interesting,” he said. “They would lay out blankets on the grass. Their bullpen wasn’t parallel to the field, it was adjacent. It was different.”

He added, “I don’t know if the players like it, but for the little kids, I’m sure they thought it was cool to see the pitchers warming up.”

In terms of the game, DeMers said there was plenty of action.

“It was kind of a wild game,” he said. “We started down 8-0 in first two innings. We started chipping away and tied it at 10 in the seventh inning and then immediately after we tied it, they went back out for eight runs.”

DeMers finished that game 2 for 4. His other hit was a single down the third base line on a first pitch fastball.

On Sunday in Fort Dodge, the Miners extracted some revenge.

“There were seven home runs total and we hit four of them, so that was really cool to watch,” DeMers said.

DeMers walked up to the plate to the song “Twist and Shout” by the Beatles.

“I am a big fan of ‘Ferris Bueller’s Day Off’ and a fan of the Beatles,” DeMers said. “I thought it was a good song to play for the crowd.”

DeMers was 0 for 3 with a sacrifice fly to deep left field.

“It was a 3-1 count, I was looking for a fastball somewhere,” he said. “That’s what I got. I put a good swing on it, but didn’t quite get enough of it. Still got the job done, with an RBI. It almost went out.”

So far in Pioneer Collegiate Baseball League play, DeMers said he’s seen a lot of sliders and a few splitters. The top pitching speed he reported at 94 mph.

On Monday, DeMers along with teammate Nate Doleman continued work at the Twin Rivers Habitat for Humanity along North 12th Street.

The two spent three hours prepping the building for it to be repainted in the near future.

The Miners will be in action again on Thursday at Carroll. First pitch is set for 5:15 p.m.

*This series will run Wednesday and Saturday of every week until the end of the season.