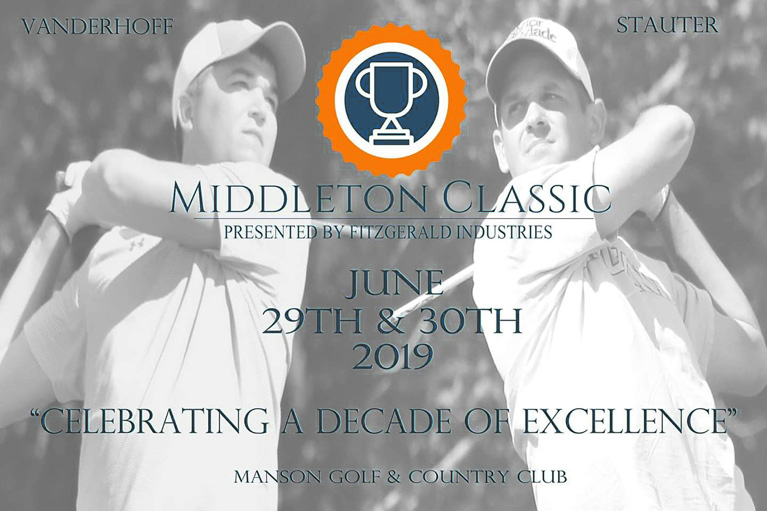 —Submitted photo The 10th annual Middleton Classic will be held this weekend in Manson.

MANSON — As the Middleton Classic reaches double digits, a decision was made to expand the golf tournament.

This year, the event doubles from one day to two, allowing for more two-person teams to enter. The Top-5 low scores from Saturday and Sunday qualify for a championship nine-hole shootout to be held Sunday afternoon.

“I started making calls to area businesses and everyone agreed to sponsor a hole,” said Johnson, who worked as an assistant golf pro in Arizona while attending school at Arizona State University. “The first year, we filled every hole with four groups of two-person teams. It was incredible to see the support.”

A total of 144 golfers are set to compete at the Manson Golf and Country Club. Both days will have a 10 a.m. shotgun start.

Marvin Poppen will serve as the honorary starter for each group on hole No. 1, with a jumbo-tron set up to show the leaderboard. The event is free to attend with on-course food and drinks available.

The 2019 Middleton Classic will recognize Scott Middleton of San Francisco as honorary chair. Scott is the twin brother of Joe. Jason Walsmith from the group, The Nadas, will be performing on Sunday morning.

“It’s overwhelming,” said Sheryl Middleton, Joe’s widow. “It’s so nice to see so many of Joe’s former players come back each year for this. We never had any children of our own, but we had many sons through Joe’s connection at school and coaching. We love them all.”

Derek Girard and Keyla Benavides will be at the event on Sunday to accept their scholarships from the Joe Middleton Memorial Scholarship fund. Since 2010, over $40,000 has been awarded to seniors.