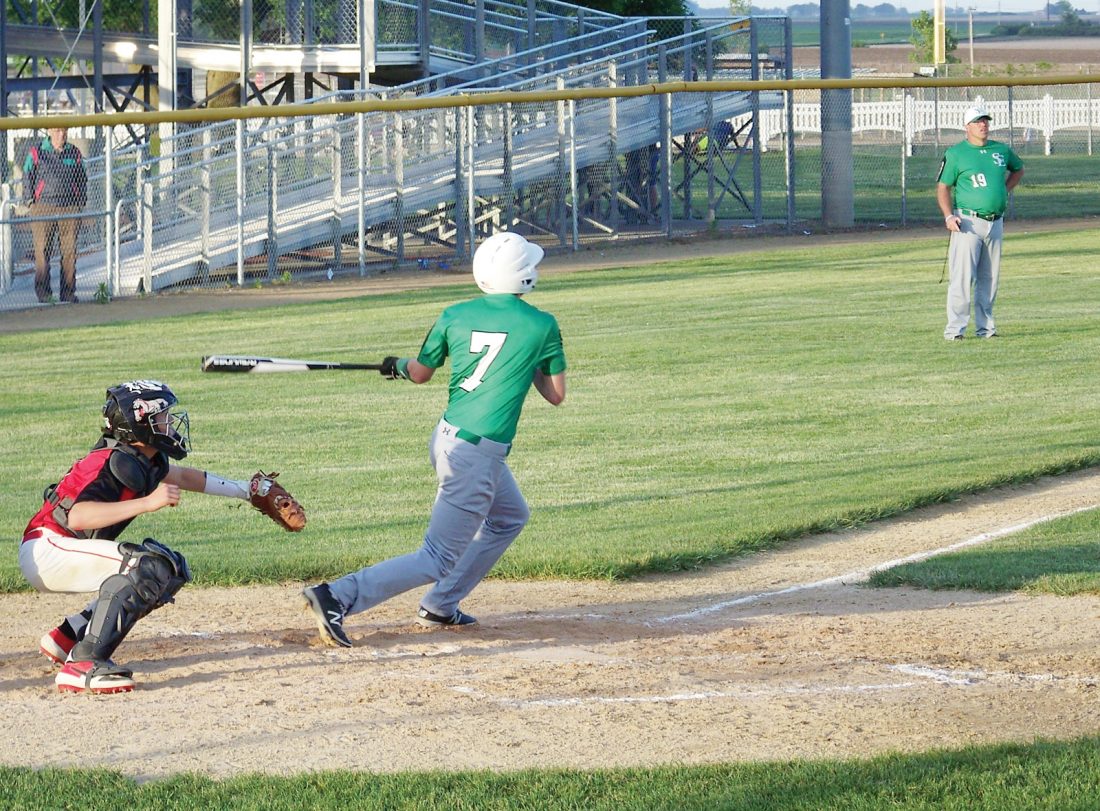 —Messenger photo by Eric Pratt NICK BENNETT of St. Edmond follows through on a hit Monday at Rogers Park.

The Gaels, playing for the first time this season at Rogers Park, rallied to tie it with two runs in the seventh on RBI hits by McEvoy and Cael Kolacia.

Peyton Scott picked up the win in relief of Kolacia, striking out five of the eight batters he faced.

“We had too many errors, but it was nice to be at home and good to pick up the win,” SEHS head coach Mike Szalat said. “Cael and Peyton gave us great efforts on the mound. We’ve just got to clean up the errors and start to give them more support at the plate.”

McEvoy finished with a pair of RBI, Connor Bocken reached base three times and Litwiller had two hits for St. Edmond (3-3 overall, 1-2 in North Central Conference).

Kolacia started the game and went seven-plus, striking out 10 with four hits allowed, one walk and no earned runs surrendered. He struck out the side in the fifth and had two strikeouts in both the second and third innings.

Scott worked out of a bases loaded jam in the eighth with a pair of strikeouts.

“Peyton really has formed into that closer role for us,” Szalat said. “And Cael pitched a heck of a game.”

Hampton-Dumont took advantage of five Gael errors, plating a run in the fourth and two more in the fifth.

Despite the miscues, St. Edmond did get a big defensive out from Jed Tracy, Noah Carlson and Gage Johnson, as they hooked up on a relay to get a Bulldog runner out heading to third in the first.

“If we can clean up those mistakes, we can be a very good baseball team,” Szalat said. “We’ve just got to be better.”

The Gaels return to action Tuesday night when they host North Union at 6 p.m.