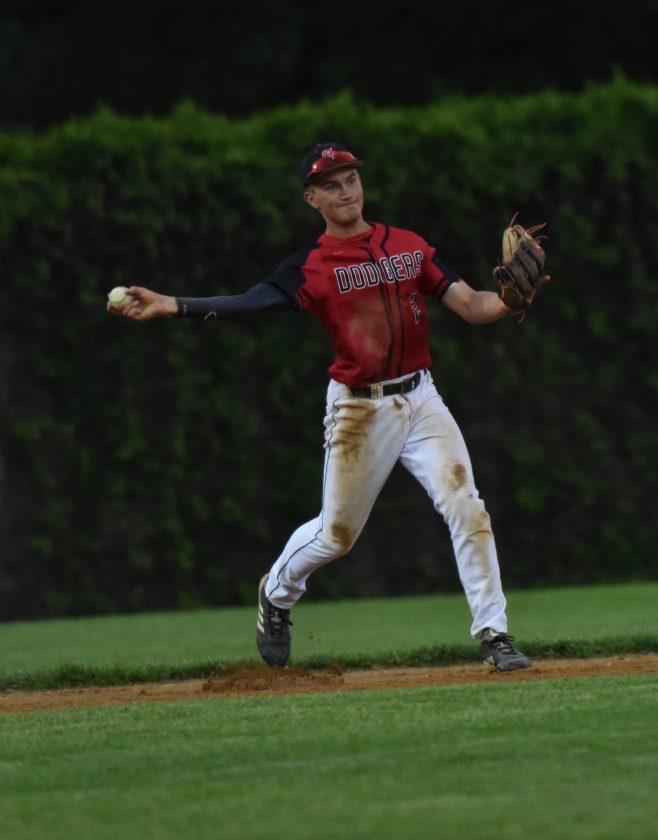 —Messenger photo by Britt Kudla Mason Bockoven of Fort Dodge makes a play at first against Waukee on Monday. For more photos, visit CU at messengernews.net

The Dodgers had 13 hits, scoring six times in both the second and fourth innings.

Shane Halligan was 2-for-3 from the leadoff spot with a triple, four RBI and two runs scored. Drake Miller had a double, drove in two and scored twice, and Brycen Bell was 3-for-4 with both a run and an RBI.

“I thought our guys were outstanding with their approach,” FDSH head coach Blake Utley said. “We were aggressive, swinging at fastballs and had a great two-strike approach. We had quality at-bats even when we did make outs by putting the ball in play.”

Dylan Zimmermann plated two runs on two hits, Drew Callon and Nick Bice each had two hits, and both Mason Bockoven and Anthony Wagner drove in a run each for the Dodgers (5-6 overall).

“Dylan looked great on the mound,” Utley said. “He could have kept going but with the pitch-count rule, we took him out to keep him available next week.”

Fort Dodge also turned a double play in the fifth. They also had four walks and four batters get hit by a pitch, striking out just four times.

The Dodgers return to action on Monday when they host Marshalltown at Ed McNeil Field beginning at 5 p.m.

In the junior varsity contest, Fort Dodge won, 11-1. Nelson Cone picked up the victory on the mound as Drake Callon was 4-for-4 with five RBI and three runs.