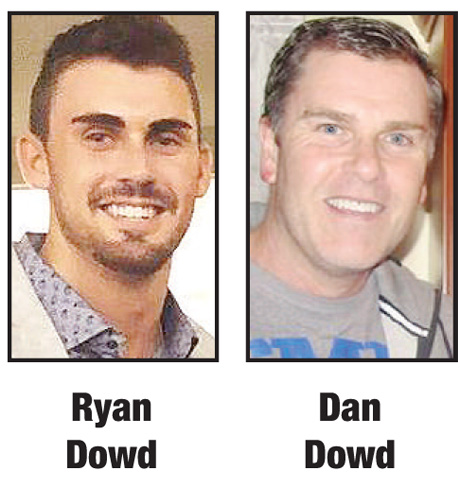 After graduating from the University of Notre Dame, Ryan Dowd headed to New York to catch a baseball game.

Dowd had no idea he was going to be physically tested — much to the delight of fans who found themselves cheering him on.

Dowd is the son of 1981 St. Edmond graduate Dan Dowd, who currently lives in Scottsdale, Ariz. Dan is a lawyer at Cohen Dowd Quigley.

Ryan had just received his MBA from Notre Dame, and his family flew to New York afterward to attend their first New York Mets game. During a walk around the park, Ryan spotted a pull-up contest that he wanted to enter.

“Our whole family flew to South Bend to see Ryan get his MBA,” Dan said. “We then flew to New York and watched the Mets game on Monday (at Citi Field).

“It’s a beautiful park. We were just walking around and Ford had a display for a chin-up contest.

“Ryan, who is physically fit, said he should try it. Any spectator could try up until the time limit, and whoever could do the most chin-ups would compete against a crossfit champion during the game.”

Dowd advanced, and came back in the fifth inning to compete against Rich Froning (The Machine) — a two-time World CrossFit champion.

“I was asked to challenge Froning to a pull up contest on the Jumbotron between the fourth and fifth inning,” Ryan said. “Miraculously, I won with 22 pullups to his 18.

“It was a lot of fun and the fans in our section really enjoyed it.”

Dan knew how physically fit his son was, but thought it would be tough go to beat a World Champion.

“Ryan is 6-foot-5 and has long arms,” Dan said. “I figured he (Froning) was going to do like 50 and he was going to kill it. They put it on the Jumbotron and Ryan won it.

“We couldn’t believe it. It was a fun experience for us. He won some gift cards and T-shirts.”

Dan, who was part of St. Edmond’s third-place state basketball teams in 1980 and 1981, still gets back to visit his 92-year-old mother, Peggy, who lives at Friendship Haven.

“I’m in town every chance I get and keep ties with Fort Dodge. I pull up the Messenger on-line and read it,” Dan said.

Ryan enjoys his trips to Fort Dodge as well.

“I have been to Fort Dodge several times,” Ryan said. “I love visiting my Grandma Peggy at Friendship Haven.

“I make sure I always make time to go to Taco Tico as well.”