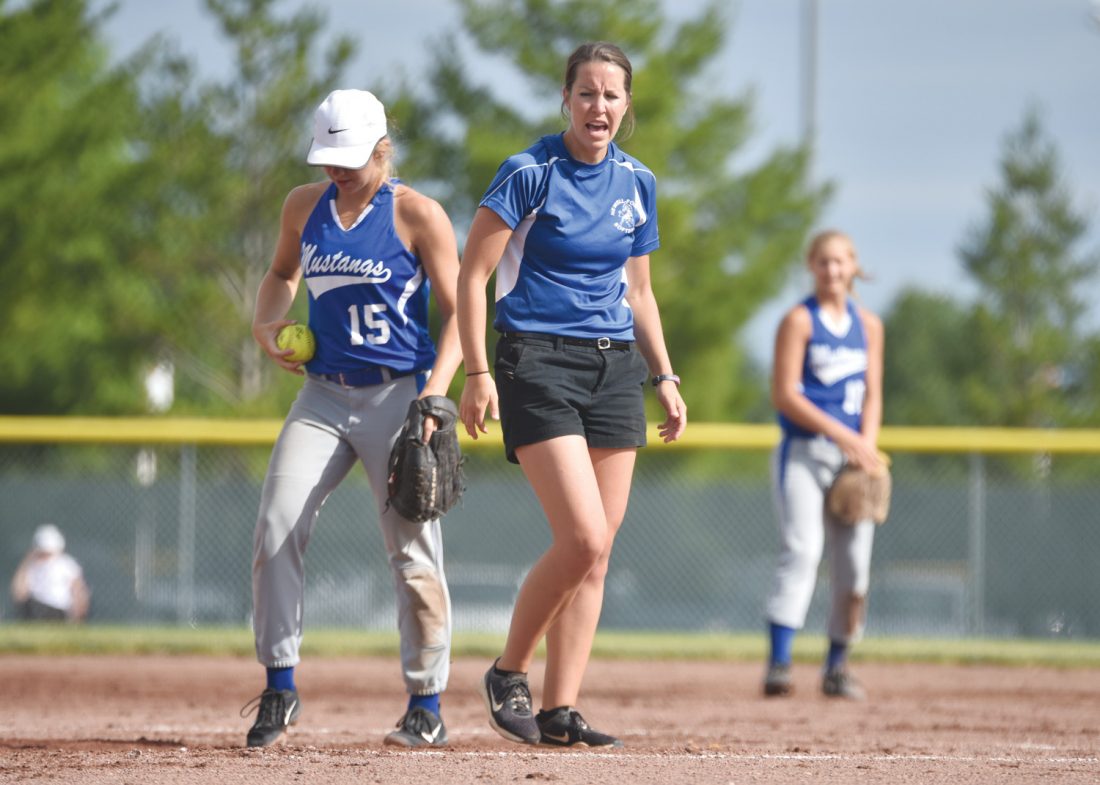 —Messenger photo by Britt Kudla Fort dodge graduate (2008) Courtney (Vaughn) darrow gives instructions to the Newell-Fonda softball team. After five seasons as an assistant coach, she is in her first season as head coach.

NEWELL — Courtney (Vaughn) Darrow has been around coaching her entire life and has always dreamed of being a head coach.

This season, the 2008 Fort Dodge Senior High graduate has taken those steps as the leader of the fourth-ranked Newell-Fonda softball team.

“Being a head coach has always been a goal for myself,” said Darrow who went on to play softball at Iowa Central and Morningside. “I’ve had so many inspiring coaches during my high school and college career.

“The community of coaches and players that I’ve gotten to know at Newell-Fonda, encourage and inspire me every day with their attitude and their effort.”

Darrow has been the assistant basketball and softball coach for five seasons at Newell-Fonda, but learned first hand growing up what it was like being a head coach.

“Growing up in a house where your parents are coaches, you learn to love sports, be competitive and the hard life lessons of working for what you want,” Darrow said. “I would go to my mom’s basketball practices when she was the head coach and see her share her love for the sport with others and I knew I wanted to do the same.

“You see first hand as a coach’s kid the impact you make on their athletes lives.”

Darrow, who lives in Newell and teaches third grade (the same grade her mother taught) in the Newell-Fonda Community School District, can just look across the dinner table for guidance as well.

“I have definitely leaned on my husband (Bo Darrow, Newell-Fonda head baseball coach),” Darrow said. “He has been great for advice for starting the season between organization, practice plans and strategies.”

The transition for Darrow has been easy and a great learning experience, sitting on the bench and in the dugout with Dick Jungers (basketball coach and former softball coach), who helped build a Class 1A power on the diamond.

The Mustangs have qualified for the state softball tournament 10 times since 2005 and five of the last seven years. Newell-Fonda was a state qualifier last season.

“Working under Coach Jungers has been a great experience,” Darrow said. “He has helped me understand how to do the little things right and how to prepare the girls. It is important to have those conversations with the girls to help them understand and accept their role.

“Coach (Tim) Gauley (2018 softball coach) has built and maintained a tremendous softball program. I’ve been lucky to have two great mentors to assist under and learn from.”

Darrow inherits a strong Mustang group with a lot of experience and are currently 14-3, which included a 12-game win streak.

“Experience is our main strength,” Darrow said. “Eight of our nine starters are back from last year’s state tournament team. This group loves to compete and they are so versatile.

“Working with the majority of the girls in basketball, you are able to understand their personalities and build those positive relationships. Many of these girls have competed at a high level in state basketball and state track this year and will do whatever it takes to get back to that level.”

Darrow’s first hand knowledge from her family and her mentors has helped build her style and the community has also played a big part in her career.

“There isn’t a more welcoming and friendly community and school than Newell-Fonda,” Darrow said. “Both our communities of Newell and Fonda live and breathe Mustang athletics.

“You can always count on a sea of blue at athletic events.”