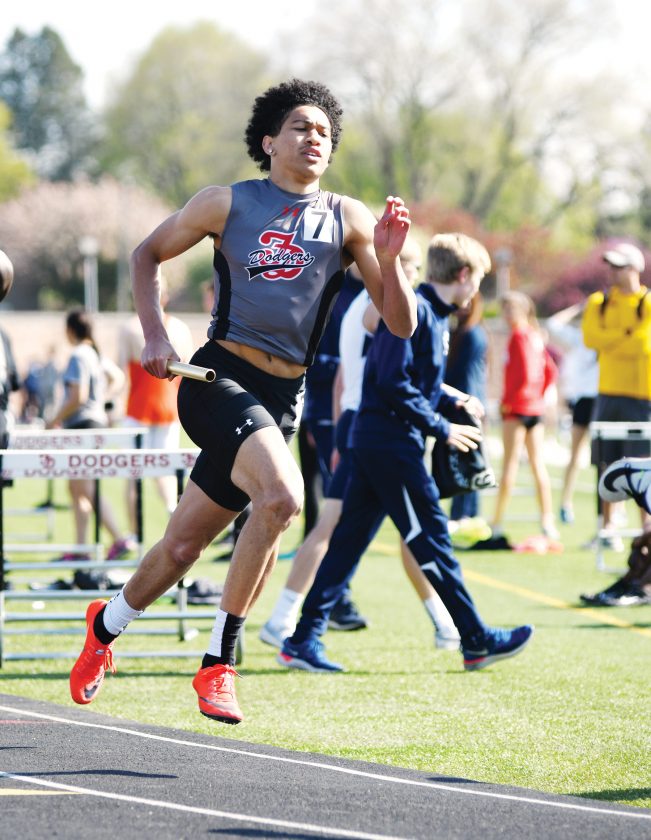 The benefit of hosting a Class 4A state-qualifying meet with some of the top runners in the state paid off for the Fort Dodge boys here Friday night.

After weather forced state officials to move everything a day, the Dodgers scored three automatic state bids in relays.

The champion Fort Dodge 4×100 set a new school record, bettering the mark from earlier this year, with the 4×200 also claiming a district title. The sprint medley finished second to advance to the state meet next week in Des Moines.

“We knew with Ames here, the kids wanted to run their best times and had the field to push them,” FDSH head coach John McBride said. “They want to go down to state and earn medals, and the kids who ran those three relays, they have the chance to do that.”

Tyler Schreier, Brycen Bell, Sam Daniel and Tysen Kershaw went 42.68 in the second-to-last event of the night, just edging Ames, which posted a 42.73.

Kershaw ran the anchor leg, as the junior was able to hold off ninth-grader Evan Grey. The Dodgers had set a new record in the 4×100 at the CIML Iowa Conference meet in 42.90 from the same four.

The 4×200 featured Schreier, Asle Thorson, Bell and Kershaw, as they went 1:29.41, with Daniel, Bell, Schreier and Kershaw comprising the sprint medley, which posted a time of 1:32.12.

“One of the biggest hurdles for us to overcome is self-doubt,” McBride said. “They proved that they can compete with everybody in the state and that is huge for their confidence.”

The state field will be completed with the 12 best times from outside the top two finishers among all the districts. That information is expected to be available Saturday.

In the shuttle hurdle relay, Trey Kasperbauer, Anthony Wagner, Thorson and Lucas Williamson placed fourth in 1:01.60, with Schreier finishing fifth in the 100 (11.19).

“We had a lot of young kids that were thrown into varsity races because of our numbers,” McBride said. “But that is only going to help them in the long run.”

“We had personal records all over the place,” FDSH head coach Todd Constable said. “This was a big night to build off of for the future with so many young kids.”

Gollob, Miller and the 4×200 relay all had their best times and throws of the season.

“We know we are young and we know that going into every meet,” Constable said. “But these kids are always coming up and asking about their times and working to get better.

“Track is a grind, and it’s not for everybody, but the ones that stick it out they really gain from it.”