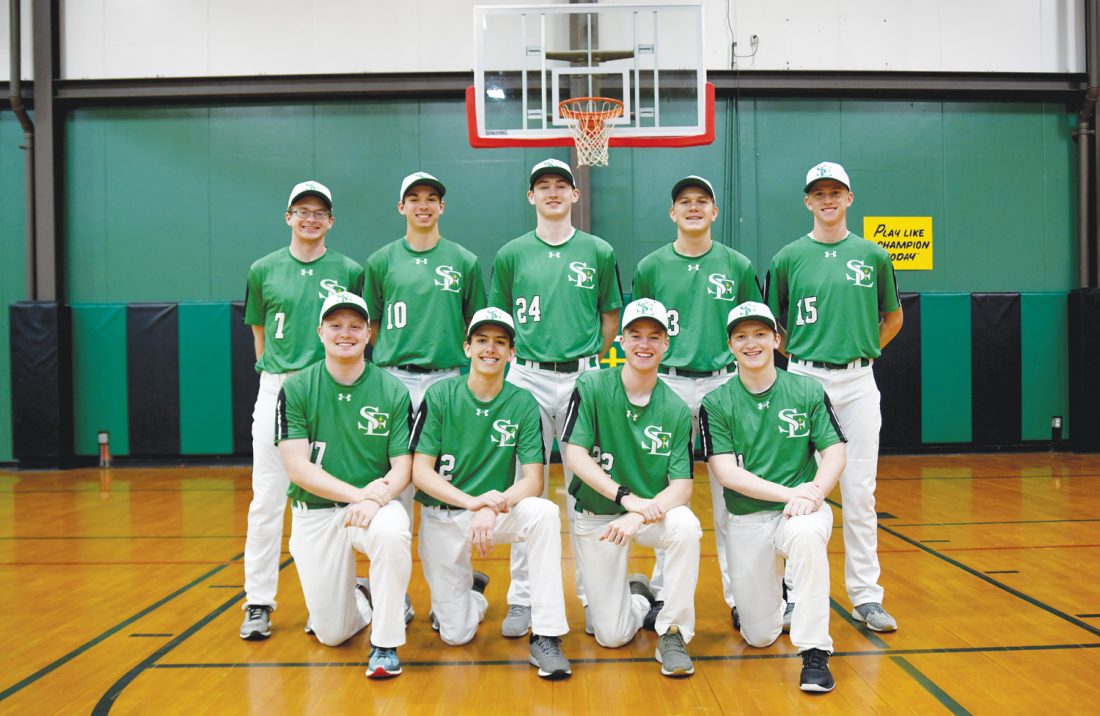 Last year St. Edmond had a young group that gained valuable experience, and head coach Mike Szalat is banking on those efforts carrying over to 2019.

The Gaels graduated only two seniors, Jake Szalat and Jeremiah Wheeler, from a club that won 12 ballgames,

This year Szalat will have five seniors guiding the ship and four juniors who earned on field experience last year.

“All of those guys are a year older and understand the approach to hitting better,” said Szalat, who is entering his second season as St. Edmond head coach. “I told the guys, everyone freshmen through seniors, are all better players than a year ago.

“Some have put a lot of time in and have gotten better.”

“Jack and Jackson have done a great job of being leaders,” Szalat said. “So far they are leading by example and all of our upperclassmen — seniors and juniors — have taken that approach to practice and have shown great work ethic.”

Eight pitchers who saw action last year will be back and the Gaels have the potential to go 10 to 12 pitchers deep of the 19 roster players.

“We are deep in pitching,” Szalat said. “We have 10 guys who can consistently throw the ball over the plate, and I’m happy to see that.

“Defensively I’m very happy with the work ethic and willingness to get better.”

McEvoy returns behind the plate for the Gaels. Last season he hit .296 with 16 hits, driving in 14 runs and scoring eight.

“Jack has a couple of years behind the plate now and I feel our relationship has grown a lot. I trust his good judgment,” Szalat said. “It’s tough for me, but cause I’m kind of a control freak on the field — I let Jack call the pitches — Jack deserves that.

“He understands the game and I like our chances with him back there.”

Kochendorfer will be back at first base. Last season he batted .210 with 10 RBI, 13 hits and 12 runs. Freshman Emanuel Perry will also see some action.

The middle of the infield will be different nightly depending who takes the mound. In the mix will be sophomore Cael Kolacia, who had a big freshman run, along with junior Noah Carlson, Litwiller and freshman Joseph Li.

“We are not quite sure about the middle of the infield yet, but we have some solid guys in the mix,” Szalat said.

“We want to peak in the middle of July,” Szalat said. “I love that these guys have gotten experience in other sports (like track) and it’s fun to watch them succeed.”

Junior Jed Tracy will be in centerfield. Tracy carried a .226 batting average with 12 runs, 12 hits and 12 RBI.

Bennett is the returning starter in right field after playing in all 23 games as a junior. He hit .224 with six RBI and 17 runs scored.

“Our Top-10 hitters are going to hit,” Szalat said. “Everyone has worked hard, and these sophomores will push the upperclassmen.”

As the lone senior pitcher with multiple innings of work, Jake Szalat was the go to guy last season. Szalat worked 47• innings and carried a 1.04 ERA with a 7-1 record. He had 58 strikeouts.

Kochendorfer and Carlson return to the mound with the most innings worked, hoping to fill some of that void.

“Jackson has looked good,” Szalat said. “Noah had a bunch of innings for us and we have 10 guys that are going to pitch and we have a lot of guys that can throw strikes.”

Also on the hill for the Gaels will be Scott, Perry, Bocken, McEvoy, Kolacia, Heldorfer, Johnson, Szalat and Perry that will see some action.

Scott had nine innings of work and had a win last season. All pitchers who are expected to see time seen varsity action last season.

Szalat sees the North Central Conference to be a solid league once again.

“Webster City has good pitching coming back and has taken off since Addison Kehoe has taken over. I have a lot of respect for those guys,”Szalat said. “With (Mike) Elsbecker at Algona, they’re going to be good. Humboldt is loaded and I have nothing but respect for head coach Jason Thurm.

“Clear Lake will be good once again as well.”

Szalat will be assisted by C.J. Tracy and Drew Hansen. Hansen will also be the middle school coach.