ON THE FAST TRACK 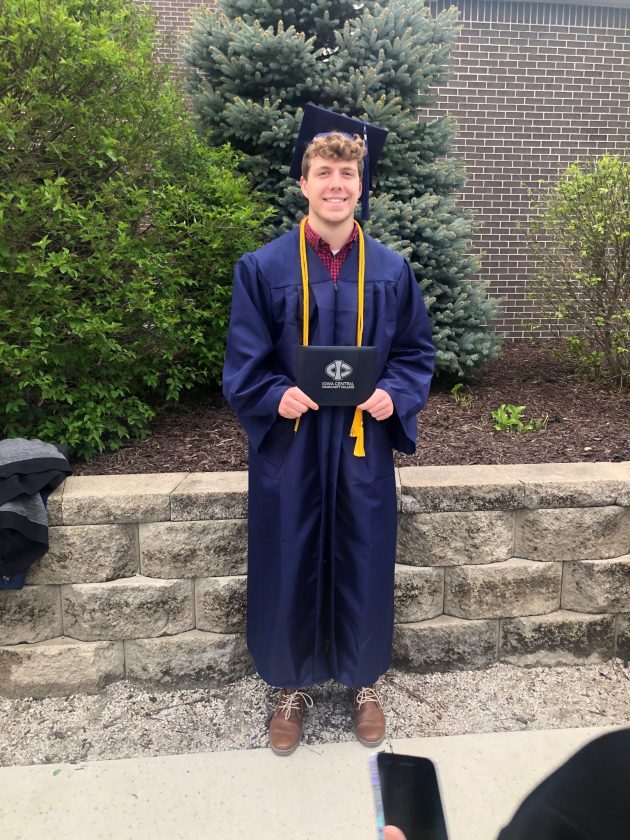 It seemed only natural that a scheduling conflict was going to cost Luke Williamson a chance to don a cap and gown for Iowa Central Community College’s graduation ceremony earlier this month.

Thanks to an assist from Mother Nature, Williamson was able to experience it after all — and even qualify for the state high school track meet less than 24 hours later.

To clarify, Williamson officially obtained his associate of arts degree from ICCC before his time at Fort Dodge Senior High will come to an end. The FDSH senior took advantage of dual-credit opportunities and followed through on a goal to enter college with a leg up on the competition — figuratively in the classroom, all while trying to do the same literally on the track.

“I was originally inspired by my older sister (Allix), who graduated from Iowa Central before she was done with high school,” Williamson said. “It saves money, and if you can get two years of college completed early, why not do it? So when I was in eighth grade, I made the commitment to myself to spread it out as much as possible (while at FDSH to obtain) the right amount of credits to (earn the AA).

“It’s definitely been time-consuming, and I’ve done a lot of extra work outside of my (high school responsibilities) basically every night to keep up with my Iowa Central courses, but it was a cool experience to go through graduation that night and finish what I had started.”

Williamson, who carries a 3.83 grade point average at FDSH while securing a cumulative 3.8 GPA at ICCC, was originally going to miss the ICCC ceremony on Thursday, May 9, because the Dodgers were scheduled to host a state-qualifying meet that same evening. Williamson was on the shuttle hurdle relay team with fellow seniors Anthony Wagner and Trey Kasperbauer and junior Asle Thorson.

Inclement weather forced the postponement of the track event, though, suddenly opening a window for Williamson’s academic recognition.

“I wasn’t going to be able to make it (to Iowa Central), but when the meet got moved to the next day, I figured it was worth going to — and I’m glad I did,” Williamson said. “I got to see a lot of (classmates) I’d taken classes with — even on-line — face-to-face, and it also made me appreciate how many kids were graduating (as a part of the 2019 class).

“It ended up being a really fun day.”

The next evening, the shuttle hurdle relay quartet clinched their second consecutive state bid by running a 1:01.60 inside Dodger Stadium, securing the No. 15 seed for the co-ed meet in Des Moines. Fort Dodge then placed 12th in the event at state with a time of 1:01.87.

“We were nervous in districts, because we hadn’t really run to our potential (at that point),” said Williamson, a two-time letterwinner in both track and baseball. “And last year we made it (to state), but got (disqualified) in the prelims. The pressure was on, especially for the seniors. We had one shot. So it felt great to qualify and get back down there.

“We were really hoping to make the finals (in Des Moines) … we ran OK. It could have been better. But we still placed three spots better than (the original seed) coming in. It was exciting to compete, especially because the last time we ran together was in the state environment.”

Williamson now turns his attention to his final days at FDSH, where he will graduate on June 2. He will then attend Buena Vista University and major in biomedical science. Williamson hopes to someday be a doctor.

“It’s a fairly new major at BV,” Williamson said. “When I talked to a department head over there, I found out it was a great option to keep me on a pre-med track and prepare me for the MCATs (Medical College Admission Test).”

Williamson, who took FDSH classes in AP biology, AP chemistry and microbiology at Iowa Central this year alone, praised his support system for their patience and understanding throughout the dual-degree process.

“My mom and I crunched the numbers (early on) and came to the conclusion that with a lot of hard work, it was a reasonable goal,” Williamson said. “I can’t thank her enough for helping me plan it all out. I took one (Iowa Central) class on-line as a freshman, a few my sophomore year, then did the heavy lifting as a junior and senior.

“It’s been a challenging stretch, but I can’t thank my family and teachers enough for pushing me and making sure I took my senior year seriously.”

Williamson also gained a greater appreciation for the advantages a community-college system has to offer.

“Class sizes are typically smaller, so you get to know your professors more and they’re very open to helping you and giving you advice and guidance,” Williamson said. “It’s a cheaper route (financially), especially for the early stages of college, and it allows you to focus on your major (after transferring).

“I’m very proud to say I’ll have degrees from both (FDSH and Iowa Central).”