Triathlons are a way of life in the Hola family 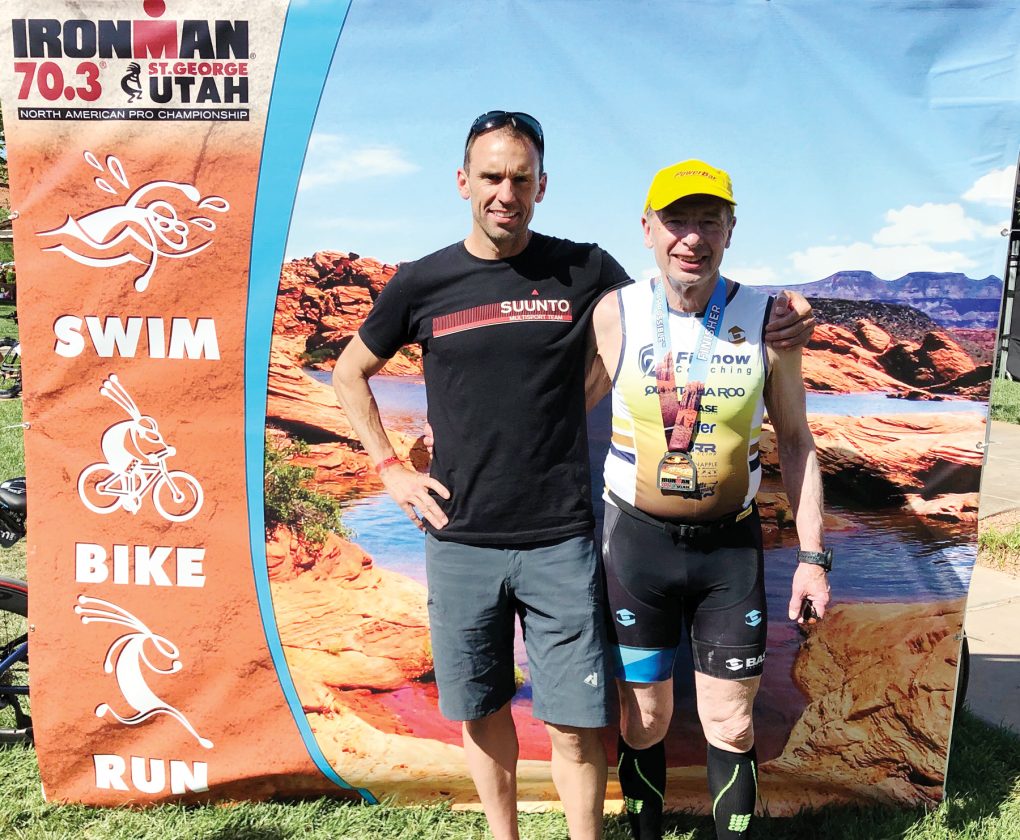 A decision to skip a lunch break over 40 years ago and work out at the local YMCA instead changed Ken Hola’s life forever.

When Hola moved to Fort Dodge in 1975, he started a job at Friskies. His boss was John Brockey, a plant manager.

As noon approached one day, Brockey asked Hola if he wanted to go to the Y during their break time. Hola, then 44 years old, took him up on his offer — and has been reaping the benefits ever since.

“When I first got to Fort Dodge I didn’t do a lot of exercising,” said Hola, who ended up working at Friskies for 30 years. “One day, John just said, ‘let’s go to the Y.’ When the boss wants to do it, you do it. So I started a tradition of sorts I continued throughout my career. I would take my lunch break time and go work out.

“It changed my life.”

The father-son duo has participated in numerous triathlons together, but Tim said this one in particular was special for him.

“We both wanted to do an early-season race together,” Tim said. “The draw to the area was the land, the mountains, climate and the heat. We both love those races.”

Tim won his age group and Ken (75-79) was second in his, while earning the highest finish out of 2,500 competitors for his age.

“He was announced more times than the pros, just because of what he was doing,” Tim said.

Tim Hola, who now lives in Colorado, has competed in more than 200 triathlons. He is amazed by his dad’s achievements.

“I look at my own racing and results, and I’m thankful for my gifts. I got started at a much younger age than he did, but I don’t think I’ll be competing at 76,” Tim said. “So many other people his age can’t walk or are in a wheelchair. He helps me believe that anything is possible.

“When you hear, ‘take a look at Ken Hola’ … it’s something I aspire to be one day. You just don’t see that very often.”

Ken, who now lives in Shoreview, Minn., traveled to Kona, Hawaii last October to compete in an Iron Man competition. He will take part in two more this year. At the end of June, Ken will be in another half-triathlon in Lubbock, Texas.

“The first one I did was in Fort Dodge in 1995. I just enjoy doing them,” Ken said. “I really appreciate the opportunity. I never thought, at this age, that I would be running side-by-side with my son.”

Preparing for the event was the greatest part for Ken.

“Tim really helped me prepare. He thought we should go the day before and put on the wet suit and get in the water, so I wouldn’t be shocked by the temperature,” Ken said. “Then we went on the bike route to check out the course.

“I finished and I thanked him for getting me out there.”

Tim was right by Ken’s side, but the entire Hola family has been supportive since day one.

“My wife (Fran Hola), who I’ve been married to for 51 years, was a swim instructor, and my daughter, Christine Litwicki, is a personal trainer,” Ken said. “The key is getting support around you.

“They deserve to be recognized, because without them, this would not be possible.”

With his schedule for the next year packed full, how much longer does Ken plan on competing?

“Until my body says I can’t do it,” Ken said. “Something will stop working and at that point, I’ll know it will be time to stop.

“Eventually this will end. It can’t go on forever. I told my son, ‘we’ll keep doing this together, but when it does end, I’ll still be there with you and support you every step of the way.'”