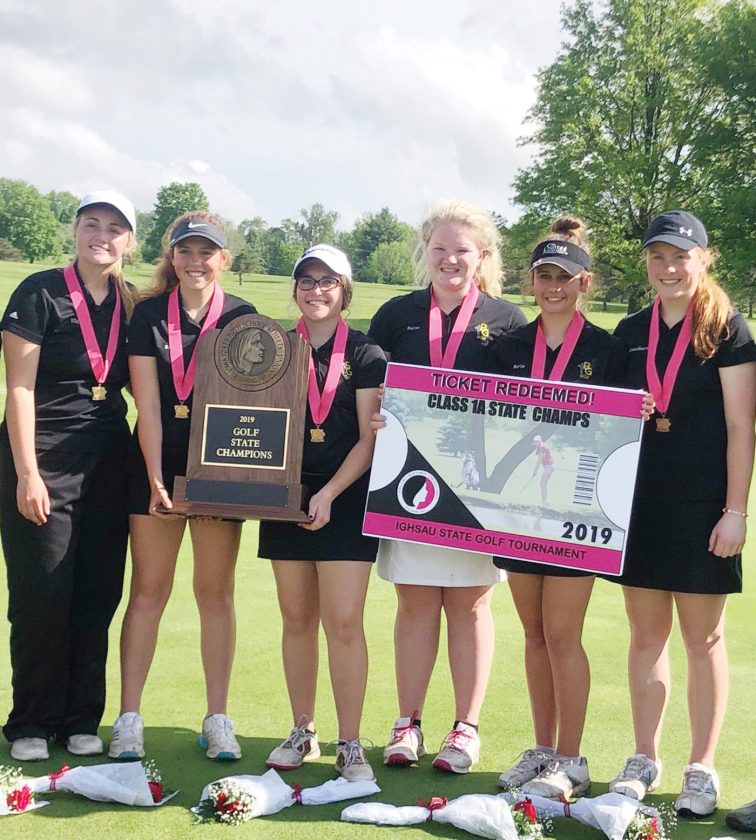 MARSHALLTOWN — The Bishop Garrigan girls golf team claimed the eighth state title in school history on Wednesday, finishing off a long final stretch at the Class 1A meet.

The Golden Bears last captured gold in 2012, and were making their 15th appearance all-time. The title gives the school 19 combined championship between the boys and girls programs.

Bishop Garrigan finished with a 727 after recording a 376 in the first round and a 351 in the second. They were two strokes behind Akron-Westfield after the first, but were 17 shots better down the stretch to overtake the Westerners at the American Legion Course.

Due to inclement weather, the first round was finished on Wednesday morning before everyone began the second 18 holes.

East Buchanan, the state leader in 1A entering the meet, was third, followed by Alta/Aurelia and Grundy Center. Annika Patton, a University of Northern Iowa commit from Alta/Aurelia, won the individual crown with a 148.

Capesius carded a 38 on her second back nine with a birdie and two pars. She had one birdie and three pars on the front.

“I am just so proud of these girls,” BGHS head coach Jared Montag said. “We will have to replace two seniors, but our goal is to get back to state and improve on our score, and with the girls we have coming back, we have that potential.

“I’m also so thankful for my assistant, Victor Berte. He has been an exceptional coach and mentor to our girls and I couldn’t ask for a better assistant coach.”

Bishop Garrigan cut the most strokes off its team score from day one to day two in 1A at 25. East Buchanan knocked 14 strokes off with Alta/Aurelia improving by 15. No one else had more than a six-shot improvement.

“It just seems surreal to me,” Capesius said. “I really never thought in my four years I would actually win one and to be able to win it my senior year is absolutely amazing. I’m also super proud of myself for improving by 15 strokes over last year.

“You can definitely say that for my senior year, I went out with a bang.”

The Golden Bears had five birdies and 17 pars as a team in the second round. They had one birdie and nine pars in the first round.

Capesius and Illg are seniors for Garrigan, but Baade and Berke are just sophomores, and Burns and Eisenbarth freshmen. They also have seven other underclassmen set to return next year.