Before we solve the how of the newspaper industry's future, we must first reestablish the why 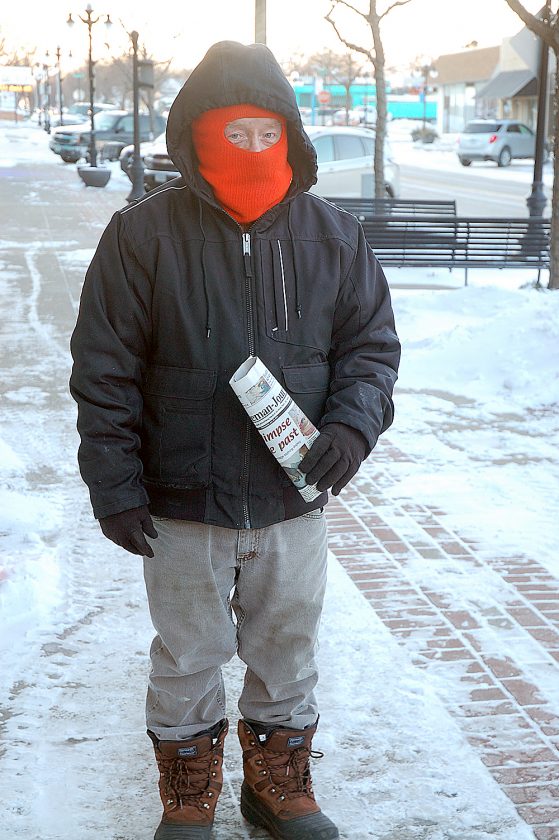 Messenger photo by Anne Blankenship Despite below-zero temperatures, Dennis Roosa of Webster City delivers both The Messenger and the Daily Freeman-Journal at the end of January.

I had a very eye-opening conversation with a local teenage athlete about our industry recently.

What started as a casual discussion about sports articles turned into an enlightening experience for — hopefully — both of us.

And for the well being of our profession, I want to share the story.

The young man wanted to thank us for our state wrestling coverage — a kind and greatly-appreciated gesture, especially because it meant teenagers in our community are still reading The Messenger. That’s a good sign.

I also saw an opportunity to listen to a potential future newspaper subscriber, asking what has become a fateful question in today’s world:

“Do you read the actual newspaper, or see the articles on-line?”

He said he clicked on our social media links: usually Twitter, in his case. But I know Facebook is just as popular. And most of his friends, he said, followed the same routine.

The demand is there. The delivery — first the why, then the how — needs work.

I couldn’t get angry about or even frustrated by the athlete’s answer; after all, I had posted our work to social media, like always, free of charge. The way of the world these days. Yes, we’re expanding our reach and enhancing our brand by using social media as a platform to disseminate information. I know it helps us connect with readers nation- and even world-wide that we’d never been able to reach before.

In terms of financially supporting our content, though, it doesn’t move the needle. And therein lies the rub.

Theoretically, social media should be a complementary figure in our arena — not a primary source of information. I don’t mind sharing a score or an article on Twitter and Facebook by any means, but the idea is to have readers still support the newspaper as a whole through print or on-line purchases and subscriptions.

Without that investment, we face a very uncertain future.

Our industry has obviously done a poor job, collectively, of explaining this to people. The high school athlete I spoke to had no idea. Neither did a coach I talked to recently, who admitted, “I’d never thought of it from that point of view” — and thankfully, subscribed to The Messenger the next day.

So why, in this day and age, should you still buy an actual newspaper? Another question I hear often, especially from young people who would rather go directly to their phones and view news through their own lens as a matter of convenience.

The Messenger still broadens the horizons of local and area readers with feature stories on neighbors and businesses we all know. We also provide comprehensive coverage from the political arena, school board meetings, court and law-enforcement developments, city council voting, domestic and civil service professions, education, history, sports action at over a dozen high schools and Iowa Central Community College, and countless other activities in order to keep the general public informed.

Being informed should be both prioritized and valued, especially in this day and age.

I often tell people that when you pick up a newspaper, there are always going to be articles on topics you weren’t aware of originally. We could all use a little nudge in that department. The internet becomes an echo chamber; while we have access to literally anything at the touch of a button, we tend to gravitate toward ideas already resting in our comfort zone. A newspaper opens eyes and minds to community developments, leadership decisions and differing points of view. It’s more about finding awareness and perspective than succumbing to the confirmation bias that often shadows our on-line habits.

This isn’t a ploy or a plead. And I don’t want to give the impression that we are a perfect product; there is plenty of work to be done, and a mountain of topics still to tackle.

We are as focused as ever on serving the community to the best of our abilities in a professional manner, though. We want to continue to be your reporters, your record keepers, your watchdogs — your neighbors.

We do need your help and support in doing so. We’re all in this together. Change is a constant in life, but we still believe in our role and the importance of maintaining the 17-decade relationship we have with this area.

Social media certainly has its place in our society, but a newspaper brings an entire world to you every day in aggregate form — as a way to educate and inspire readers young and old. It’s a message that bears repeating, because your stories are always going to be worth telling.