What is the secret to Dodger success? 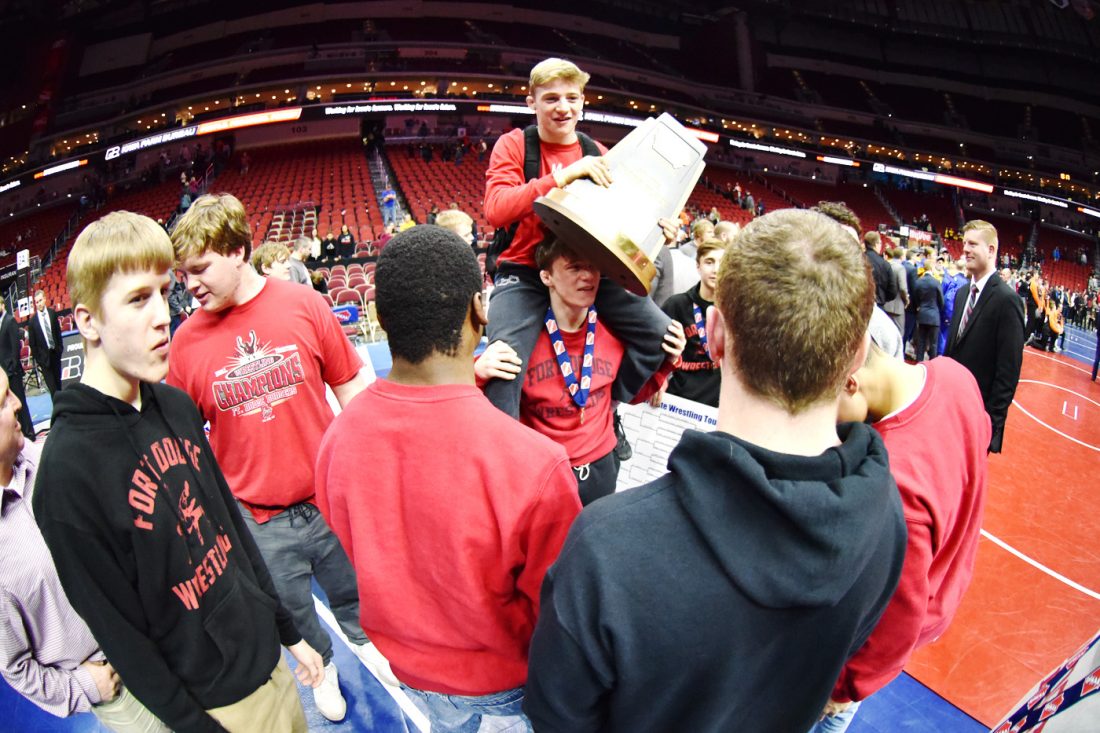 It almost seems as though winning championships has become second nature to athletes in the Fort Dodge Community School District.

Another whirlwind run through the state wrestling and bowling competitions netted the Fort Dodge Senior High athletic department four more titles recently. Dodger junior Carson Taylor and sophomore Drake Ayala secured gold medals on the mat Saturday in Des Moines, and on Tuesday in Waterloo, the FDSH girls bowling team and Leah Sanck — a junior at St. Edmond who competes for the Dodgers in a shared program — swept first-place honors in convincing fashion.

Fort Dodge has now captured 27 individual or team championships in the last five athletic seasons: 13 in wrestling, five in cheerleading, four in bowling, four in tennis and one in track. It’s an impressive number, especially considering the nine previous years yielded only eight titles combined — six in cheer and two in tennis — from FDSH.

Many athletes and their families are making more of an off-season commitment to their respective sports. The time and money being invested in travel teams, clubs, lessons and other forms of competition have turned a once-simple concept — representing your school — into a complex battle for notoriety and scholarship opportunities.

That’s nothing new, though, and it isn’t unique to Fort Dodge. In fact, one could argue many of the programs the Dodgers face on a regular basis — in their six-team division of the Central Iowa Metro League, for instance, sits three of the state’s seven biggest schools: West Des Moines Valley, Waukee and Southeast Polk — are more powerful in their resources and talented on their rosters than ever before.

The credit often lies in the intangible areas, where Fort Dodge still finds ways to make itself unique. The Dodgers will never enjoy many of the advantages other championship contenders possess, but as we’ve seen time and time again in athletics, there’s more to the story than being the biggest or the best on paper.

Local coaches emphasize treating their teams like a family and their teammates like brothers and sisters. There is an old-school selflessness that still exists here; one that has become rare in today’s me-first athletic climate.

When the time comes to deliver in the spotlight, a program’s bond — the shared sweat equity — tends to find a way to separate champions from other contenders. And that theme has been consistent when Fort Dodge enjoys success on an elite level.

Ayala put it best: after winning his gold medal inside Wells Fargo Arena to cap arguably the most dominant individual season in school history, the nationally-ranked star didn’t bask in the glory or expect to be showered with praise. Instead, Ayala hustled over to watch the end of Taylor’s match — a teammate who has, in the true tradition of FDSH wrestling, become a brother.

“I was more excited for Carson winning (a title) than at any other time (during the week),” Ayala said. “I was crazy pumped for him.”

Fort Dodge doesn’t need to be the conventional choice or the odds-on-favorite to win championships. Local athletes are perfectly comfortable making names for themselves the old-fashioned way: by counting on each other and coming together to find the separation they need.