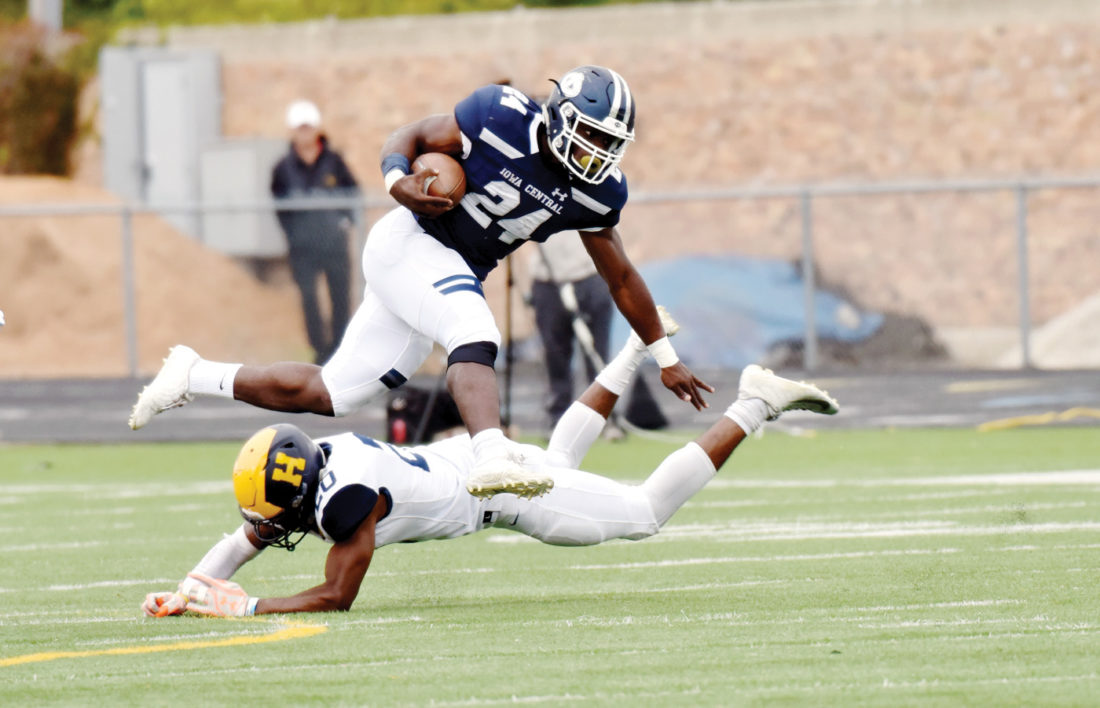 Messenger photo by Britt Kudla Iowa Central’s Draven Peeples leaps over a defender during the regular season at Dodger Stadium.

Earlier this year, the Iowa Central football team secured a spot in the Graphic Edge Bowl for the first time since 2014.

Now the 16th-ranked Tritons know who they will face, as it was announced this week that No. 12 Monroe will make a visit to Cedar Falls and the UNI-Dome on Sunday, Dec. 2.

“We’re glad to be the No. 16 team in the country with a chance to play in the Graphic Edge Bowl against a good opponent in Monroe,” ICCC head coach Jesse Montalto said. “We haven’t had a chance to watch a ton of film on them yet, but they have played some tough teams and we know they will be a quality opponent.”

While this is the first postseason appearance for Iowa Central in three seasons, Montalto led his former team, Ellsworth, to four consecutive bowl bids. The Panthers won all four games during his tenure.

“The biggest part is getting our kids one more game to play and try to enhance their recruiting,” Montalto said. “We’ll have coaches coming in during bowl week practice and we’ll have one last time together.”

Blake Dever, a transfer from Arkansas State, has completed 147 of 239 passes this year for 1,715 yards and 16 touchdowns, including 10 passing scores over his last three games. Emmanuel Logan-Greene is his top target, hauling in 64 passes for 761 yards with five touchdowns.

Rashad Witty has 51 receptions for 608 yards and six scores, Draven Peeples has 621 yards and Jatoviay Hill has 315 with four touchdowns.

Spencer Cuvelier anchors the defense with 90 tackles, including 19.5 for loss with 3.5 sacks and three forced fumbles. Savion Harris has 59 tackles, both Daquan Cross and Michael Slater had 6.5 sacks, and Ty’Reim Stephens has broken up 10 passes.

Iowa Central started the year with an upset of Butler — which ended the season ranked 15th and will play No. 10 Northeastern Oklahoma A&M in the Midwest Classic Bowl — but the Tritons were just 2-4 after six games.

They have won five in a row since, including a resounding 54-16 upset of then-No. 8 Hutchinson last week. They also played second-ranked Garden City earlier this year — which will tangle with No. 1 East Mississippi for the national title — along with the third-ranked Reivers and No. 17 Highland.

“It’s also big for us as a coaching staff being able to go into the offseason saying we went to a bowl game and hopefully win a ring,” Montalto said. “We’ll hit recruiting hard in December and show off the successes throughout the year that we experienced, along with everything we had to overcome.”

Monroe has won three in a row, including a recent 69-28 victory over Hocking in which they racked up 719 total yards. Jalen Brown has thrown for 890 yards with seven passing touchdowns and eight rushing scores, Zaire Jones has a team-high 525 yards rushing and Tyler Hodge is the leading receiver with 310 yards.

Monroe, in its seventh season as a program, will be making its first-ever appearance in a bowl game. They are also the sixth New York team to play in the Graphic Edge Bowl since it started in 1978.