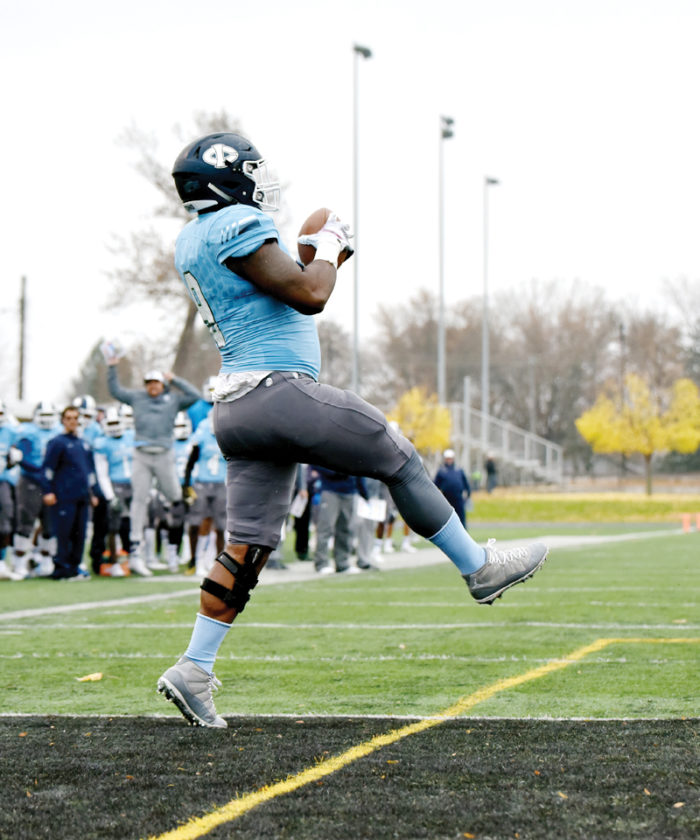 Just like the Iowa Central football team, sophomore defensive standout Michael Slater has come a long way over the past year.

Slater scored his first career offensive touchdown as a Triton to open the game, then added his second defensive score of the year as Iowa Central crushed Fort Scott on Sophomore Day Saturday inside Dodger Stadium, 43-9.

As a high school standout in St. Louis, Slater earned honors on both sides of the ball. He showed off those skills by hauling in a four-yard pass from Blake Dever early in the first quarter.

“I actually broke my pinky last week, so I had to make the catch with eight fingers,” said Slater, who started his college career with the University of Iowa. “Blake put it in a good place and it was a good ball, but I still like the defensive side more.”

Slater made his presence known there in the third quarter, picking off a pass 13 seconds into the half and returning it to the end zone. He also scored against Coffeyville earlier this year as well.

“I definitely haven’t scored twice in a game since high school,” Slater said. “It was a good feeling to get back inside the end zone on both sides.”

After taking a redshirt in 2015 with the Hawkeyes, Slater left the program following the 2016 campaign. He found his way to Iowa Central and was a standout for current athletic director Kevin Twait a season ago.

Despite his success on the field, Slater struggled away from it.

“This year means everything,” he said. “We had a bad (season) on and off the field last year, and coming to JUCO, that’s your last straw. I was on my last foot, but Coach (Jesse) Montalto and Coach Twait sat me down, talked with me and told me this is make-or-break year. I took that to heart.

“Coach Montalto, he has gone out of his way for me and everything I do is for him. He’s given me a lot of opportunities to do this, and I give him and Coach Twait all the credit for giving me another chance.”

Dever, a sophomore transfer from Arkansas State who helped lead the comeback last week at Independence, was 15-for-20 passing for 211 yards with three touchdowns, including an 80-yard strike to Rashad Witty.

Witty finished with five catches for 122 yards, adding another 63 yards in returns. Emmanuel Logan-Greene had six catches, with Draven Peeples and Jatoviay Hill running for 112 and a score.

“This game meant a lot to those returning sophomores,” Dever said. “We played our hearts out for them. To get to six wins after one last year and zero two years ago, that’s a good sign for this program. These coaches are a pretty amazing staff and they are in our heads every single day.

“We were focused on finishing and that’s what we did.”

Along with Slater’s interception return, Jackson Martens also picked off a Fort Scott (2-7) pass for a score, with the defense adding a safety.

Spencer Cuvelier had four tackles for loss and a sack, with Slater recording two sacks. Lamont Bishop and Calvin Bright each had a sack, and Dijon Walls picked off a third pass.

“These kids have been focused all week and really wanted this win,” Montalto said. “They’ve bought into what we’ve asked of them and this is a great win for our kids.

“Our guys were flying around on defense and they have been fun to watch get after it this year.”

This is the first four-game win streak for the Tritons since the 2013 season. They will head to No. 4 Hutchinson next Saturday before preparing for a Dec. 2 bowl game in Cedar Falls.